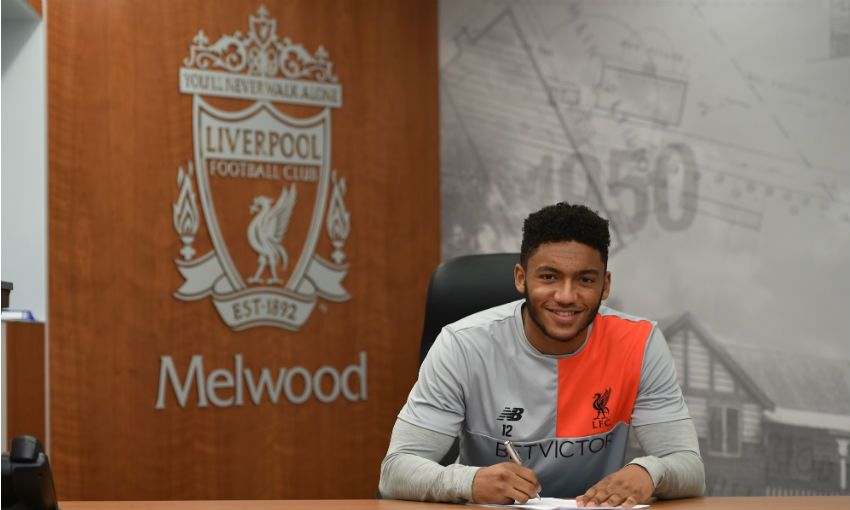 Liverpool FC can confirm Joe Gomez has today committed his future to the club by signing a new long-term contract.

The 19-year-old, who arrived at Anfield from Charlton Athletic in June 2015, penned the fresh deal at Melwood on Friday afternoon, the terms of which will come into effect from July 1, 2017.

Gomez has made nine appearances in total for the Reds, two of which have come this season following a 15-month absence due to injuries.

Moments after signing the contract, the defender told Liverpoolfc.com: “It was a very easy decision. It is a great club and when it was mentioned about me extending my time here, it’s not something I had to think very long about. I’m very happy it’s done now and I’ll just look to push on.

“It’s massive. It means a lot to me – it’s a massive gesture from the club to show that trust and faith in me. That’s why it was so important I did the same and done it so quickly, because I’m very happy here. I’ve loved living here and playing here and learning under the new manager, so it was a quick decision.”

Gomez battled back from a double injury setback – the first of which was sustained just days after Jürgen Klopp was appointed as Liverpool manager – to return to contention this season.

The England U21 international resumed training in October of last year before figuring in a number of U23 matches prior to a long-awaited first-team return in the FA Cup tie with Plymouth Argyle at Anfield on January 8.

Gomez continued: “I feel good, very good. I’m back training normally and have been for a good while now. Obviously, it was nice to get some minutes in the last two FA Cup games.

“Now it’s about me trying to push on and keep learning – learning from the team. I’ve got good role models in front of me: Dejan, Joel, Ragnar, Lucas and so on. It’s a great environment for me to be in and I’m just trying to learn each day from them, as well as trying to push and challenge them at the same time. It’s good and I feel good.”

Watch our exclusive interview with Joe Gomez on his new contract on LFCTV GO now. For details on how to sign up, click here.