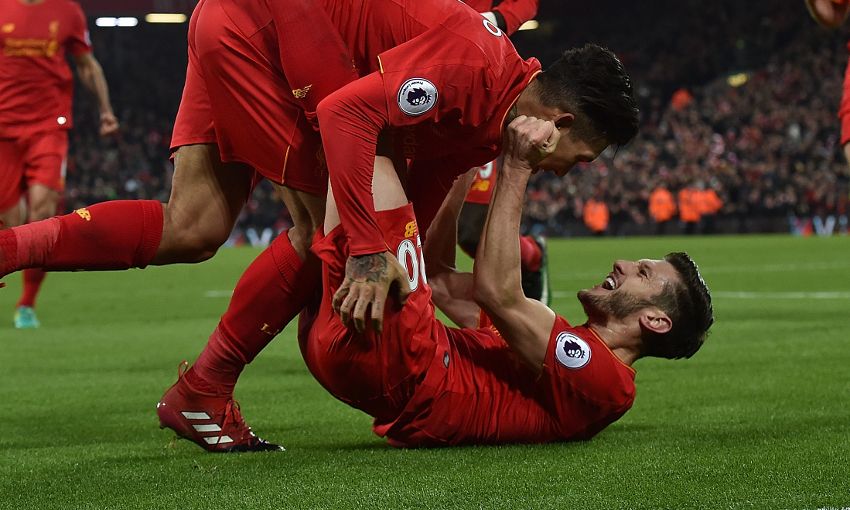 Liverpool returned to second place in the Premier League with a 4-1 victory over Stoke City at Anfield on Tuesday evening.

Jürgen Klopp’s team recovered from going behind to an early Jonathan Walters header and took the points through strikes from Adam Lallana, Roberto Firmino and Daniel Sturridge, plus Giannelli Imbula’s own goal.

The Reds’ third consecutive win again closed the gap to leaders Chelsea to six points, with Manchester City next up on home soil on December 31.

Klopp kept faith with the same starting line-up from last Monday’s dramatic victory at Goodison Park, with Emre Can and Sturridge again options for the manager on the bench.

Meanwhile, Stoke had three former Reds in their XI – Joe Allen, Peter Crouch and Glen Johnson – plus Charlie Adam among the substitutes.

Liverpool began the game on the front foot, with Jordan Henderson sending an early side-footer over the crossbar and Firmino flicking a header into the grasp of Potters goalkeeper Lee Grant.

Yet they fell behind on 12 minutes.

The Reds initially looked to have dealt with a downward Crouch header but when the ball was clipped back towards the near post by Erik Pieters, it was Walters who reached it first to nod past the palm of Simon Mignolet and into the net.

Stoke soon went close to doubling the lead, too, with the outstretched leg of Mignolet denying Allen’s low finish – and a rebound for the incoming Crouch – after the Welshman took advantage of hesitant defending at the edge of the box.

The growth in confidence of the visitors was obvious and their cautious opening to the contest gave way to ambition in every attack.

Klopp’s men had their best chance to that point in the 24th minute, when Stoke failed to adequately clear Dejan Lovren’s delivery from the right flank.

Firmino grabbed possession and held off the challenge of Bruno Martins Indi inside the area, but his attempt to slide a shot underneath the crowd was foiled by Crouch on the goalline.

The equaliser instead came from Lallana, 10 minutes before the break.

Divock Origi’s sweeping pass out to Sadio Mane allowed for another dispatch into the area and when the No.20’s first touch bounced favourably off Johnson yards out, he lashed home on the angle.

Moments later, Lallana scampered into space in the right channel and pulled back to Firmino for a presentable chance that the Brazilian fired too high to trouble Grant.

But the No.11 made no mistake in the final seconds of the half to provide a perfect pre-interval fillip.

As the Reds sought an opening on the left, James Milner fed Firmino, whose moment’s pause to control was followed by a classy left-footer which hit the far post, rolled onto the other and over the line.

There was a scrappy start to the second period, with Liverpool unable to produce the right final touch or pass and the Potters trying to find a way back into the game.

That changed on 59 minutes, though.

The latest Reds attack was given sudden impetus when Henderson quickly moved the ball into the run off the left wing by Origi and the Belgian’s attempt to pick out Mane at the far post was turned into his own goal by Imbula.

Mane might have notched a fourth for his team within seconds but the forward’s crisp drive from the left corner of the box was just wide.

Klopp made a double substitution midway through the half – Can and Sturridge replaced Lallana and Origi respectively.

And Sturridge was dancing almost instantly.

It was a late Christmas gift for the Englishman, who seized on a short backpass by Ryan Shawcross, rounded the ‘keeper and slotted into the empty net with 70 minutes on the clock.

Firmino should have extended the advantage further but mistimed his finish when a corner was worked to Henderson in the centre, the captain spun the ball to Lovren and he squared.

Liverpool had already done enough for the three points, however, and leapfrogged City in the standings ahead of the clash with Pep Guardiola’s side on New Year’s Eve.