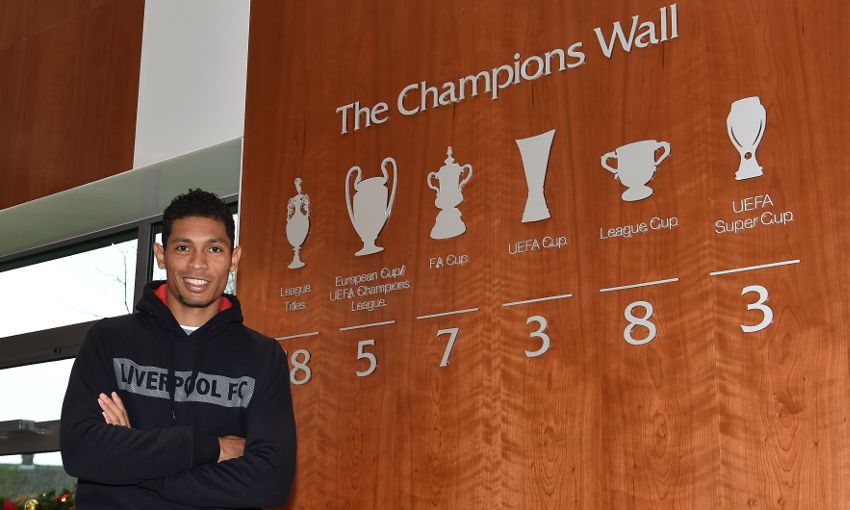 Olympic gold medalist and world-record holder Wayde van Niekerk had one main objective when he paid a visit to Melwood on Friday morning: To get a hug from Jürgen Klopp!

The South African sprinter, who shot to worldwide prominence in the summer after his outstanding display at the Rio Games, was a special guest of the club at the training facility.

In clinching first place in the men's 400m event in Brazil, he shattered a record that had stood for 17 years with his time of 43.03 seconds.

Earlier that day, Van Niekerk had watched the thrilling 4-3 victory at Arsenal on the opening weekend of the Premier League season from his hotel room as he rested up ahead of his race – and he believes that result had a positive impact on his mood going into the sprint.

Visiting the city for the first time, the lifelong Red was invited along to watch the lads being put through their paces in the morning session before getting an opportunity to meet with the boss and members of the first-team squad for a chat, as well as taking in a behind-the-scenes tour of Melwood.

His appearance at the West Derby complex came just days after the 24-year-old attended his first ever Liverpool game in person, taking a place among the visiting supporters for the 1-0 victory over Everton at Goodison Park. While on Merseyside, he'll also make a trip to Anfield for the game with Stoke City on December 27.

Before he departed Melwood, Van Niekerk sat down with Liverpoolfc.com to discuss his love for the Reds and his meeting – and hug – from the boss, as well as explaining how watching the opening-day victory at Arsenal went some way to helping him achieve Olympic gold.

Registered users can watch our interview for free now in the video below, or read on for a full transcript.

Wayde, can you describe how it feels to finally be here and get a unique opportunity to see what Liverpool Football Club is all about?

It's a real privilege and honour for myself. I've been a massive fan – I am a massive fan – of the club and just getting to interact with the players, the team and the staff, and even just being here, has been an amazing experience and a blessing for myself. I am just trying to take everything in; I need to sometimes take a deep breath to realise that I am here. You get quite star-struck, but I'm really enjoying it.

What made you decide to come to Liverpool at this time of year? You're spending Christmas Day in the city, too…

Because of my training. I had to schedule the visit around training – training is a bit more passive now, so that's why I decided to come over around this time. I hardly ever have a winter, so I thought I would use it as my winter!

You went to the Merseyside derby on Monday – your first ever Liverpool game and what a game to go to. How was it?

It was a deliberate choice. I wanted to experience it. Knowing the stadiums and town and atmosphere are all right here [in the city], I wanted to stay for two games so I did the Everton game and I'll do Stoke City too. The derby was quite intense, very intense. We were literally sat in the middle of the Everton and Liverpool fans and you could feel the tension. I'm not someone who celebrates much, even if you look at my races and so on, I'm not someone who loses my mind. But when Mane's goal went in, I lost my mind and I was in the crowd with everyone else, enjoying the goal!

How much of a dream come true was that for you? You've wanted to come and watch Liverpool for a long time, so to be there and then that dramatic end to the game…

I think I still have to pinch myself. It's similar to me breaking the record – you know you're here but at the same time you need to pinch yourself and say 'Did it really happen? Am I really here?' I am someone who lives for the moment, so just being able to experience this is something I am cherishing, taking notes of and I am really just letting it happen and letting it be. It's been amazing. If you speak about the emotions we went through, for 90 minutes we sat there and thought to ourselves 'Ah, I guess it's going to be a goalless draw' but then the extra-time gave you a bit of hope and then the goal came… it brought a lot of emotions out of me!

Do you watch every Liverpool game back at home?

I try to. Now and then, when we're playing afternoon matches, I'll have training but then I am scrolling through my mobile phone and checking for updates. If I can, whether it's online or on TV, I'll try to catch every single game.

Why Liverpool for you? What made you a Liverpool supporter?

I had this image of a gentleman's club, a classy club, and just that love. Everything I do, I do with love and I could feel that atmosphere within the club, even though I'd never really experienced it. Now I got to be here today, got to meet the players, the club, the team and the manager. The moment I met Klopp, I was like 'I need to get myself a hug!' Just that love is what kind of attached me to it. Also the fact that Liverpool are a massive team in the league; it's a team that everyone fears and I think that's why I feel so attached to the club.

Did you get the hug?

I did! That is the first thing I did when I got here. I went and did it myself, I didn't ask! I just went in for the hug!

What kind of things was Jürgen talking to you about?

I want to speak football and he wanted to speak athletics! We were speaking athletics and football. But I don't know, to me at that moment I was really star-struck and really felt the appreciation for just being here. I felt welcome immediately. I didn't really feel out. I know many times you will think it's a professional club and that you shouldn't be disturbing anyone, but I was welcomed immediately – and that's something I'll always cherish. 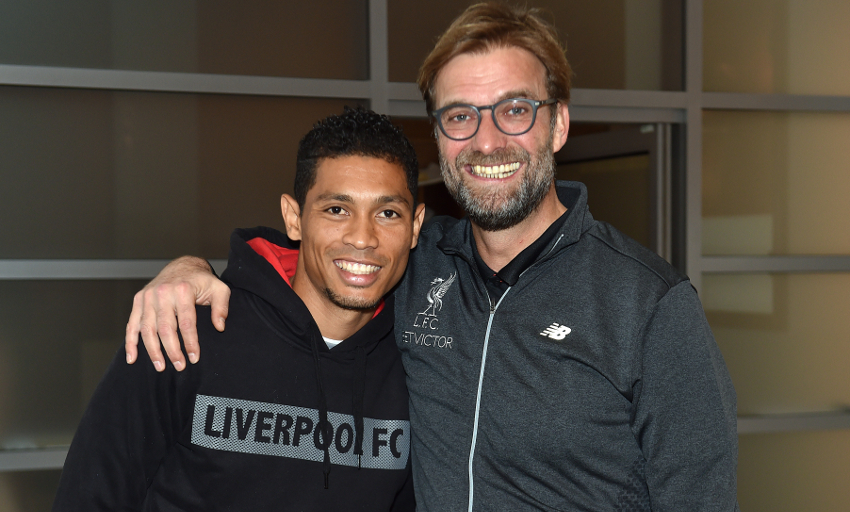 It was good to see some of the lads come and have a chat with you – Henderson, Sturridge…

I've been in contact with Henderson for a bit and I've spoken to Sturridge for a bit as well, but via social media. This is the first time I actually got to meet them. I've been speaking to Henderson for quite a while and I've gotten to know him. He's a nice person, a really good character. Daniel as well – I mean, who is not a fan of the dance? Just finally getting to meet him and a lot of the other players – having them walk around you and getting to see them, it was really something I won't forget very easily. I was a bit shy to stop the guys and ask them for a picture, but I am just happy to be here, to see the set-up, get to know how the guys are training and how the set-up looks. It's something I'll never forget.

On the day you broke the world record back in the summer, I believe there was something that inspired you beforehand concerning Liverpool…

Yes, I watched the Arsenal-Liverpool game and it definitely lifted up my spirits a lot! When you're an athlete, you're laying around in your room and you're isolated, doing your own thing [before a race]. It took my mind away from the race that was happening later in the evening. The game was during the afternoon and my race was late at night. For about two hours I could think football, I could think Liverpool and with that we got the win, so I was quite happy and joyful. My mood was quite high for quite a bit, so it took my mind away from the fact that I was racing later. I remember telling my girlfriend afterwards, 'I've got a race later, I need to take a nap and get ready for the race!' But Liverpool did play a big role in my mood that day.

So, Anfield next. You've done your first game, you've been to Melwood, you had the Klopp hug and now next up is Anfield. How much are you looking forward to that?

I am extremely excited. I cannot wait. Just listening to the crowd sing 'You'll Never Walk Alone'… I am really looking forward to it and I want the days to go by!

How do you think you'll be feeling when you hear 'You'll Never Walk Alone' for the first time in person?

I tend to sing it at home in front of the screen where nobody sees me! I will try to join in with the crowd and just experience the atmosphere because I know it's going to be massive. I know our stadium is much bigger now with the Main Stand, so I am really looking forward to that moment. 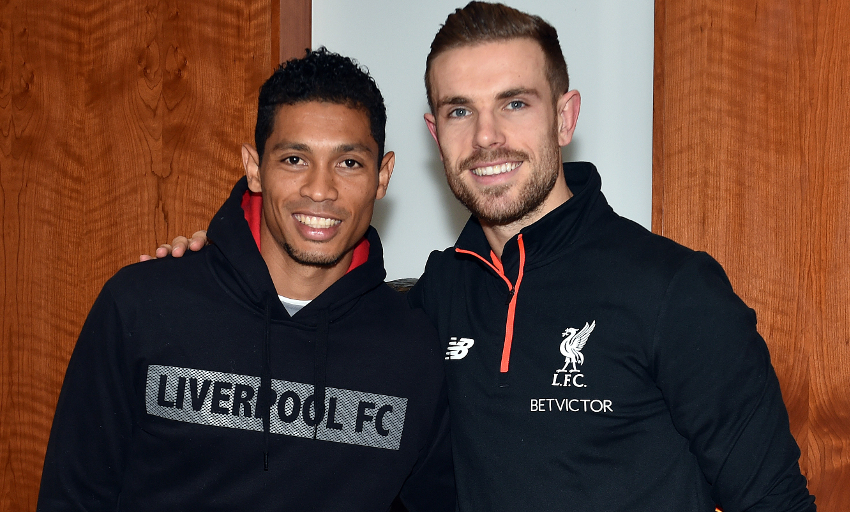 It's been a really incredible couple of years for you and now at the end of 2016 you're here in Liverpool watching your team. This must be a great way to cap off the year?

Yes, it's a pure blessing. This is going to be a December I will never forget. It's going to be something very special and I am really thankful to the Lord for blessing me – continually blessing me – day in, day out. I am just really enjoying every single second of my life.

Just finally, we have to ask: Liverpool have a few quick players within the squad – which player could give you a bit of a challenge out on the track?

As an athlete and as a sportsperson, I am always going to back myself! But we've got some quick players; I think the majority of our players are quite quick. Mane is obviously someone to reckon with and Clyne as well. But I think we've got different techniques – they've got football techniques and I've got a sprinter's technique, so it'd be two different races!