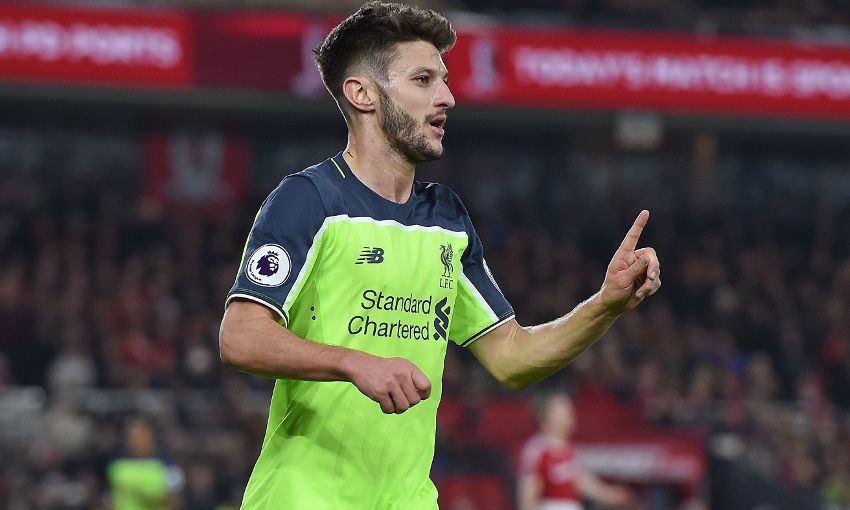 Adam Lallana considered Liverpool's 3-0 win at Middlesbrough to be 'not too far off' the complete away performance but insisted the team is still in a learning process.

The No.20 produced a Man of the Match display at the Riverside Stadium, scoring twice himself and setting up the other goal for Divock Origi.

Having kicked off the Premier League contest especially keen to claim three points after the results against Bournemouth and West Ham United, the Reds controlled the play and fully merited the victory.

As always, manager Jürgen Klopp spoke of further room for improvement – a sentiment shared by Lallana, who feels the players can take greater advantage of their fluid attacking approach.

“It was not too far off [the complete away performance],” the midfielder told Liverpoolfc.com post-match.

“But the manager has already quickly said to us there are things we can improve on. We trust what the manager says. So I’m sure over the next few days we’ll have a look at the performance, recover well and get ready for Everton on Monday night.

“We needed to move the ball quicker [in the second half] and take less touches, myself included.

“At times, we can maybe get a little bit carried away and all of us maybe want to attack at times when we need to protect a bit more.

“Of course, that’s a good sign. But at times, if you get too carried away, they can counter you and at times they did in the first half.

“But in the second half, I thought it was a lot better and we started very well. We could have got the goals earlier but we were patient and didn’t let that faze us. In the end, I think 3-0 was a fair result.”

Part of Liverpool’s development at the moment is to deal with the absence of influential playmaker Philippe Coutinho, who has been sidelined since sustaining an ankle injury against Sunderland last month.

“Any team is going to miss Philippe – he is one of the best players in the world,” said Lallana. “He is working hard at Melwood to get back as soon as he can to help the team.

“But [Roberto] Firmino, one of my favourite players, was brilliant, putting the team first and sacrificing things that he likes to do when he plays in another position. The team comes first all the time. I thought he was brilliant again.

“The manager wants fluidity throughout the team. When you’ve got [Sadio] Mane and [Georginio] Wijnaldum making selfless runs… Firmino, Divock, [Jordan] Henderson and myself – it is very fluid.

“We’re still learning and we’re learning to play without Philippe. But the sooner we can have him back, the better.”

Origi’s second-half strike extended the Belgian’s scoring run to five successive matches, since he made a pivotal impact upon replacing Coutinho in the Anfield clash with Sunderland.

Lallana said of the striker: “He is someone who hasn’t featured as much as I’m sure he would have liked at the beginning of the season.

“But he has kept working hard in the background – not moaning, a great attitude.

“He has got his chance and has taken it. He is someone who works hard off the ball as well, puts himself about and must be a nightmare for any centre-half to defend.”