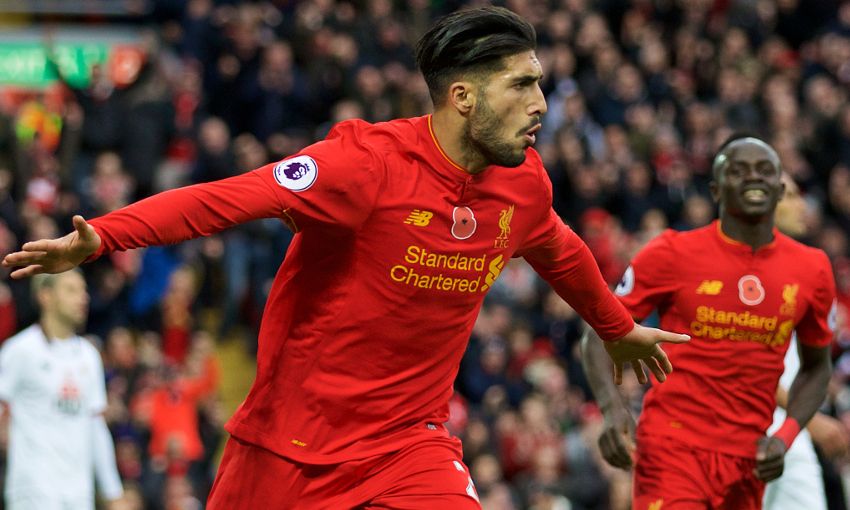 When Emre Can headed home Liverpool's third goal during the 6-1 demolition of Watford at Anfield almost a fortnight ago, there was much more to the celebration than the home​ side extending their lead before half-time.

The German met an inch-perfect centre to nod into the corner of the net and cap off a quick​ team move that had begun with a Loris Karius ​goal-kick. ​​​​It​ was flicked on by Roberto Firmino​, ​before being played wide right to Adam Lallana​, who ​provide​d ​the sublime assist – all in​ approximately 11 seconds.

It was Can’s second goal in as many matches, having struck against Crystal Palace at Selhurst Park one week prior​, and the 22-year-old’s jubilation was evident as he wheeled away towards the Main Stand.

He​ explain​s ​to Liverpoolfc.com at Melwood: “The goal I scored ​against Watford, the header, well two days before the game we’d worked on that move in the training session, and so it was nice to actually score it.”

Can’s​ tally of two goals so far in 2016-17 means he has already equalled last season’s haul, which was achieved over the course of 49 appearances.

The reason for his recent hot streak? A subtle shift of​ responsibilities​.

“I’ve played a little bit differently to last season – I’ve been playing offensively, so I think I make the runs into the box more,” Can ​reveals​.

“I always want to score more goals – the target is always to score more – so it’s nice that I’ve scored the two goals, but the most important thing was that we won both games.

“My position has changed a little bit [this season], but not too much. Last year I played more in the role of holding position and this year I’ve been playing more in the half-spaces. It’s nice I can play both positions.

“Playing in the half-spaces means I can go forward more. I am enjoying it – but I’d enjoy playing in the holding position as well.”

LFCTV GO: Watch more from Emre in the latest episode of #LFCWORLD

The addition of goals to his game serves as clear indication Can is taking the next steps in his development.

Indeed, the former Bayern Munich and Bayer Leverkusen man will chalk up his 100th runout for Liverpool if he figures against Southampton on Saturday, a little over two years since​ his transfer from the Bundesliga to Merseyside.

“I know about it, to be honest, and it’s very nice,” he replies, with a smile, when asked about the landmark.

“If I think back to when I first came to Melwood and then played my first game, it’s nice. It’s great to play my 100th game for such a big club. It’s a big honour for me.

“I am very thankful to everybody here at the club – the fans, the staff, the staff behind the staff, my teammates and the coaches. I am very happy here in Liverpool. It is a big club and I am enjoying it playing here.

“I feel I am getting better – and I try to get better. I made a step when I first came here, but I didn’t know what would happen. Now I am more experienced than back then, but I don’t know really what’s changed - I’m a little bit older and more experienced.”

Given his age, talent and rate of progression, few would bet against Can hitting the next appearance milestone of 200 games for the club.

And if he does achieve that, he knows what topics he’d like to be reflecting on: “That we’ve won some silverware. That would be perfect.”

Can’s immediate priority, however, is aiming to make sure Liverpool remain at the top of the Premier League come Monday morning – and, indeed, beyond.

More goals from the No.23 would certainly play a part in trying to help make that a reality.

The images of Can zig-zagging from side to side, arms outstretched as he raced towards fans in the Main Stand was rapidly ​shared across social media in the aftermath of Liverpool’s Watford win.

“I didn’t think about the celebration before the game to be honest, it was just my reaction after the goal,” he confesses. “I don’t know why I did it, but I am happy the fans enjoyed it.”

Celebration routines have become a staple of the Reds’ successful start to the season, with Firmino, Philippe Coutinho and Sadio Mane the main protagonists in conjuring up catchy​ ​choreography​.

So, are we likely to see Can involved in such performances next time he hits the back of the net?

Emre Can stars in episode 15 of #LFCWORLD, which is available now to LFCTV GO subscribers. The show also features former Red David Thompson, who looks back at his One Moment In Time, and there’s an excerpt from the final episode of LFCTV’s exclusive Added Time series, starring ex-Academy player Sean Highdale. Click here to watch now.