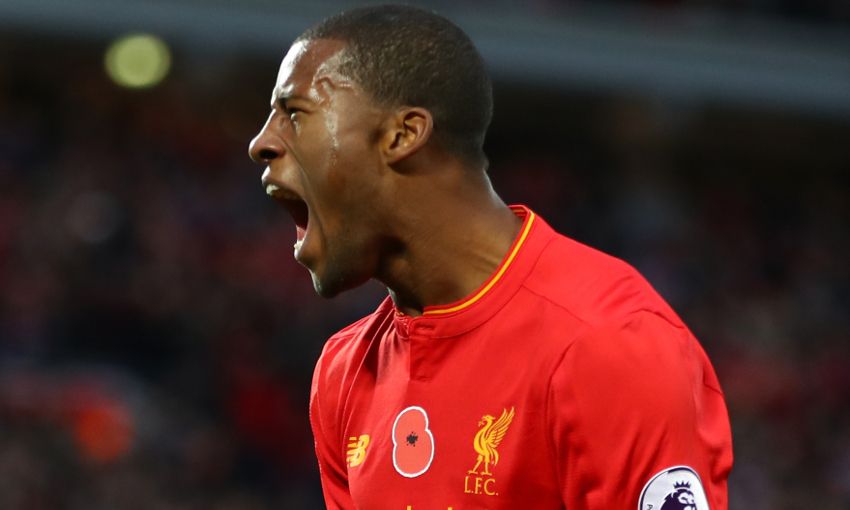 The delight at scoring his first Liverpool goal was etched across Georginio Wijnaldum's face last weekend – and the midfielder believes he can be celebrating more often in the future.

An impressive start to life at Anfield after his summer move from Newcastle United was only missing a goal, with the Netherlands international regularly mentioning his desire to end that wait as he reflected on his opening months.

But it came in the final minutes of the 6-1 rout against Watford as Wijnaldum capitalised on a rebound from Daniel Sturridge’s last-minute shot to tap home from close range.

Though the goal itself mattered little in the grand scheme of the game, the way in which the No.5 celebrated was evidence of exactly what it meant to him.

Wijnaldum had become accustomed to scoring during his time with Newcastle, notching 11 in the Premier League last season – including four in one match as the Magpies put six past Norwich City.

He had actually previously achieved the same feat while at Feyenoord, claiming a quartet of goals in an Eredivisie meeting with Groningen in February 2011.

And now his tally has started, the Dutchman is determined to add more for the Reds.

“I believe that is something I can do again,” said Wijnaldum.

“I did it at Feyenoord but unfortunately not at PSV, although I did score three goals in a game there. I believe I’m a player who can do that.

“Of course, I need help from my teammates – that’s why I will never say I did those things alone. I scored those goals against Norwich but I think I had two or three assists from Moussa Sissoko and you need your teammates to create chances.

Whether he is scoring or not, it is rare to see Wijnaldum without a broad smile on his face.

But the midfielder – who turns 26 on Friday – also has a strong leadership streak in his character, which he tries to express at the most opportune times.

“I say what I think but I will not force myself to say something when I don’t want to speak. Sometimes people force themselves to do things but I will do it only when I believe it feels right.”