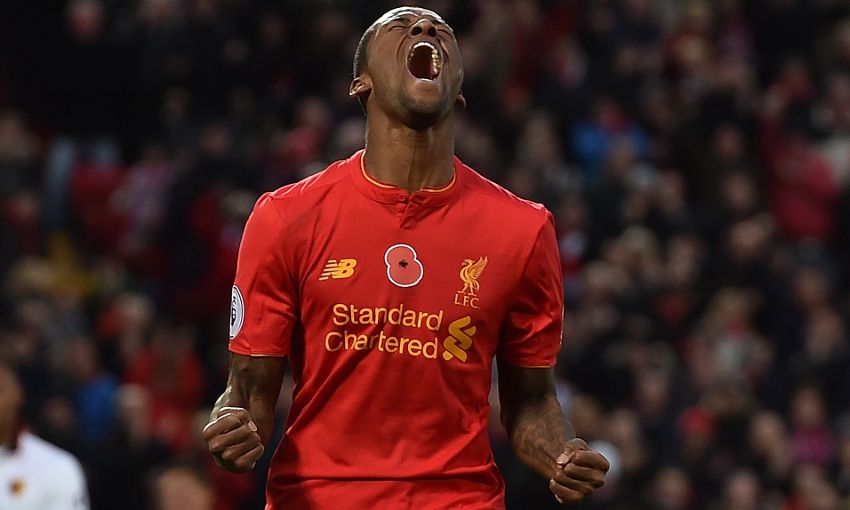 Liverpool’s players are enjoying their football so much at the moment that it is a ‘blessing’ to be a part of the club, Georginio Wijnaldum believes.

The Reds’ outstanding form continued in emphatic fashion on Sunday afternoon as a 6-1 drubbing of Watford at Anfield elevated them to the top of the Premier League table outright.

Jürgen Klopp’s side were simply irresistible as they picked the visitors apart – and Wijnaldum feels the satisfaction the squad are taking from the manner in which they are performing is being reflected on the pitch.

“We are scoring goals and playing good. Unfortunately we could not keep another clean sheet, but we won and scored a lot of goals – that’s the most important thing.

“You enjoy playing in a team like this because it’s going well and you’re playing with good players. We want to keep the ball and score goals, and we’re trying to defend well. They are happy moments here in Liverpool.”

It was Wijnaldum who had the final say on an afternoon to really savour in L4, coming off the bench to strike in his first goal for the club in injury-time.

“I’m really pleased, especially in a game like this when you see everyone scoring,” Wijnaldum reflected on his maiden Reds goal. “I was searching for the goal and I’m happy that I’ve got it.”

Liverpool now head into the international break a point ahead of second-placed Chelsea having tallied 26 from their opening 11 fixtures.

Nevertheless, Wijnaldum firmly subscribes to Klopp’s view that their position at the summit of the Premier League counts for little at the moment.

“The manager and the technical staff will do everything to keep it the same – we will work the same and play the same,” said the Holland midfielder.

“We as players must realise that it is not common to be at the top of the league, so you must work hard – that’s what we’ve done, worked hard to get there.

“We must be aware it can change quickly, so we need to keep the spirit in the team and fight for every point we can get.”