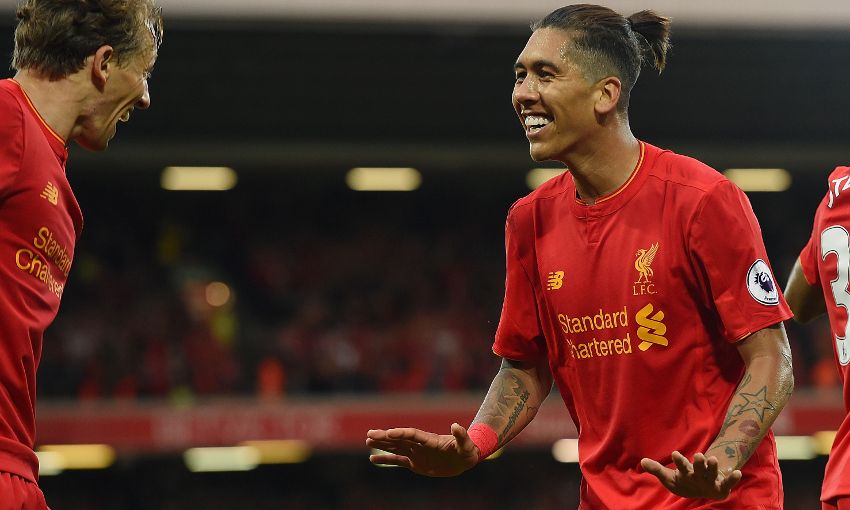 It has been one of the symbols of Liverpool's effervescent start to 2016-17.

The sight of Roberto Firmino closing down an opposing defender, putting in a block or a challenge to regain possession and then starting another attack for the Reds – usually while Jürgen Klopp responds in turn with a fist pump of delight on the sidelines.

It’s a talent that was originally honed back in his home city of Maceio in Brazil, where he actually began his footballing journey as a defender in his youth. ‘A natural skill that he enjoys,’ was how his manager succinctly described it recently.

More often than not this season, Firmino has been deployed in the most advanced position on the field for the Reds – a role that has both offensive and defensive responsibilities, winning the ball back deep inside the opponents’ half and immediately putting them on the back foot and under pressure.

“I train every day to be better in this position,” the 25-year-old states, with an air of humbleness, during a chat with Liverpoolfc.com at Melwood this week. “Any position in which I play, I will always do my best and strive to be better. I will always play with attacking intent in my position, but I am always looking to help my teammates in any way I can.

“I am an attacker; however, I don’t forget about defending. It’s always in my mind to help my teammates the best I can. I try to do both on the pitch – attacking and defending – never forgetting either responsibility.”

Nine appearances this season have already yielded four goals for Firmino. In contrast, it took until November 21 last season to open his Liverpool account, and it was January 13 when the second and third of the 11 strikes he plundered overall were registered.

A tell-tale sign of his progress and development over the past year, perhaps?

“I should be moving towards that direction otherwise there would be something wrong with the way I am training!” he responds, with that trademark grin etched across his face.

“The aim is always to be better. I am the type of player who is demanding of himself, so I try to improve in every aspect. You cannot stop. I will always keep trying to achieve my goals.”

Indeed, smiling and Firmino are synonymous. It’s rare to see the No.11 anything other than cheerful on the field, such is the unconcealed enjoyment he takes from playing football.

Not least when scoring – and already this season, the Brazil international has treated supporters to some unusual, but nevertheless entertaining, celebration routines, roping in Philippe Coutinho and Sadio Mane for their assistance.

“Whenever there is a new song out, we’ll sometimes try to rehearse a celebration so when one of us scores a goal we can celebrate it together,” laughs Firmino. “I find this a nice thing between teammates to show the friendship between us and I try to do this whenever I can.” 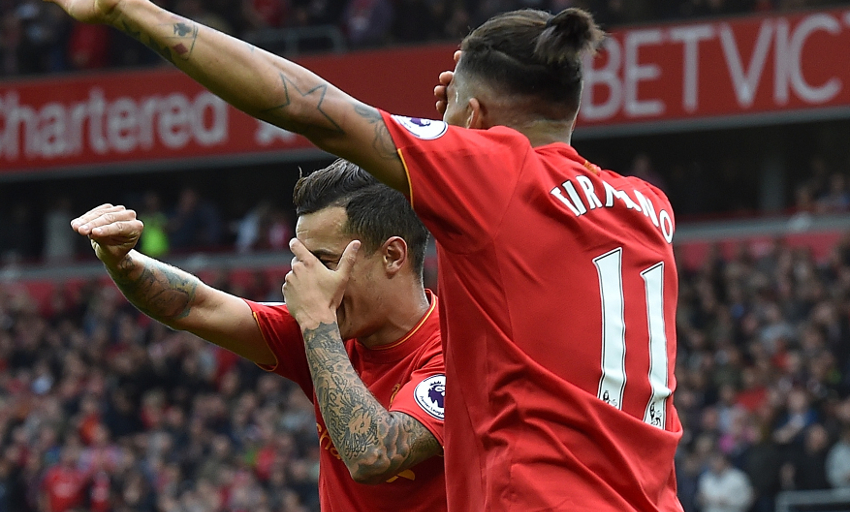 More serious matters for Firmino and Liverpool come in the shape of West Bromwich Albion’s visit to Anfield on Saturday for the latest round of Premier League action.

Though ultimately frustrated by a goalless draw with Manchester United on home soil on Monday night, the Reds’ stats make for impressive reading: unbeaten in eight matches across all competitions and two points off leaders Manchester City in the top-flight standings.

Still, Firmino and his teammates are well aware that any let-up in concentration and intensity could be fully taken advantage of by the Baggies.

“Before I came to the Premier League, I was aware of how challenging it is in comparison to other leagues worldwide – it comes first,” he reveals. “West Brom are a good team who are improving. They have got some good results against other top teams, so we’ll need to be really focused and concentrated if we’re to win this game.

“I have watched some of their matches and they play very seriously. They play with a typical English strategy: they attack, but they keep it tight. We have to respect their style; however, we should try to impose our own style and way of playing upon them in order to do our best. If we can do that, I think everything will be alright for us.

“We’ve been training every day in order to improve in the games. Thanks to the training, everything is working out well and we are achieving that. The team is tight and very focused in every game and we hope to keep going like this until the end of the season.”

Liverpool’s ambitions of collecting three points will be complemented by the presence of 54,000 fans inside Anfield, the majority of whom will be willing the hosts on.

A factor that can – and perhaps should – make a telling difference more often than not for the Reds, Firmino believes.

“Every time I play at Anfield, I like the atmosphere the supporters create,” he says. “I get goose bumps when they sing – it really is incredible to play there.

“We have to keep in mind that we are at home and everyone who plays there against us should feel the pressure, so we must be focused on doing on our best in order to win.”

Pressure is something West Brom’s defenders are likely to come under when in possession as Firmino assiduously and intelligently closes them down throughout the early-evening kick-off.

A further mark of his growing influence at Liverpool can be found in the fact both he and Coutinho are the joint-leading scorers of Klopp’s reign with 15 apiece.

It’s not just on the field Firmino is settled and content either – he’s also enjoying city life with his partner Larissa and recently-born baby daughter, Valentina.

He says: “Before I was in Germany and now I am here, at a bigger team. I enjoy my time here in the city – it’s a big city in comparison to the city I lived in before.

“I am feeling adapted here and I am happy. I am happy to play here and to live in this city.

“Sometimes, the weather doesn’t help – but that’s not important, I am here to play football and to do my job alongside the team!”

And if his efforts in doing his job on Saturday are rewarded with a goal, can we expect to see another celebration routine?