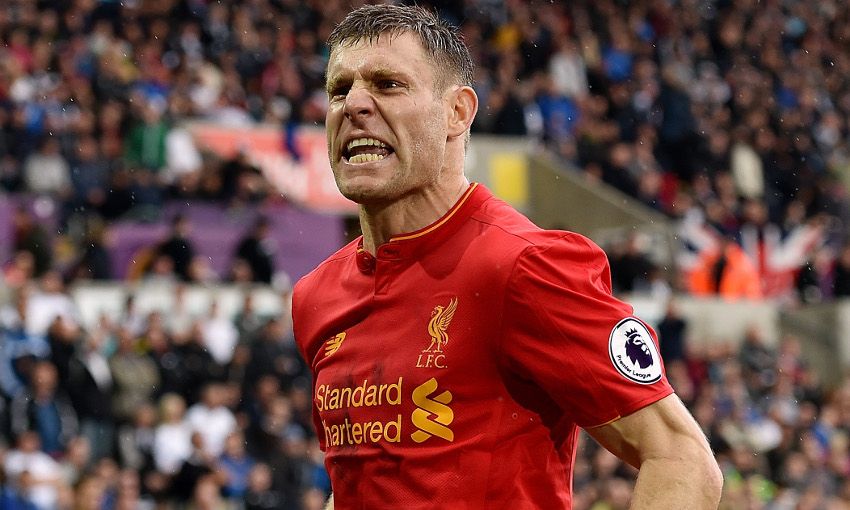 James Milner says he has never worked with a manager quite like Jürgen Klopp before but believes the German's unique approach to tactics and touchline etiquette is starting to reap rewards at Liverpool.

The No.7 netted his fourth goal of the season - all of which have been penalties - on Saturday as he and his teammates came back from a goal down to defeat Swansea City at the Liberty Stadium.

That win ensured the Reds ended the latest round of Premier League fixtures inside the top four and just two points short of league leaders Manchester City going into the international break.

Liverpool are five points and as many league places better off than they were at this time last term - a clear indication of their steady improvement under Klopp.

And Milner is not surprised that the former Borussia Dortmund coach's philosophy is beginning to bear fruit.

"Every manager is different, they have their strengths and weaknesses," he said.

"But Jürgen is a top manager. Definitely up there with one of the best I’ve worked with.

"His organisation, his passion. The sessions he does are different to anything else I’ve ever experienced.

"It can only be a good thing. You see his enthusiasm when he’s bouncing on the touchline.

"He’s a top manager and hopefully we can go on and become very successful with him."

Watch highlights of the Reds' win over Swansea with LFCTV GO

The foundations for Liverpool's strong start to the new season were laid during Klopp's first pre-season campaign at Anfield, according to Milner.

The 30-year-old expects things to keep getting better, too, thanks to the youthful nature of the squad at his manager's disposal.

"He’s brought in his own players and he’s improved players who were already here," he continued.

"He’s been able to work with us long enough to get his style across. Everyone knows their jobs.

"We can still improve. We know that and that’s the pleasing thing.

"Last year we showed spells where we played the way we wanted but then we would look a completely different-looking side.

"But this season you could only say it was the first half at Swansea where we haven’t looked like we want. That shows how everyone is coming on and it can only get better.

"Look at how young the squad is. I’m only 30 and I’m pretty much one of the oldest. That’s disappointing for me! But it’s pleasing when you look at the youth and the potential here.

"We have a great squad of players. Just look at the lads we had on the bench against Swansea and the other lads who didn’t even make the bench. That shows the quality we have at the club."

Reflecting on the win over Swansea specifically, Milner revealed that the players could sense their boss was unhappy with their first-half efforts.

But he credited a cool-headed half-time team talk for the Reds' second-half comeback in Wales.

"He can be emotional. At Swansea he wasn’t so much waving his arms on the touchline as much as trying to hold in his anger.

"Big credit to him. Even before the game he said the right things, we just didn’t perform. At half-time he was very angry with the performance.

"We knew he was holding it in. But he got the information across clearly and got us going again. It would have been easy for him to just fly off the handle. That wouldn’t have been very productive. We know how emotional he is.

"He did a great job, said the right things and we came out and performed how we should."