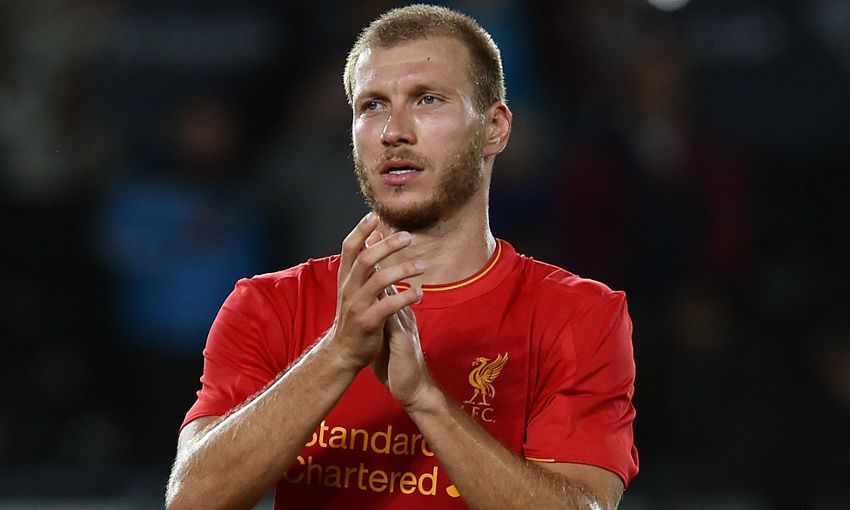 A first goal for the club and a debut appearance at Anfield – it's fair to say last week wasn't a bad one for Ragnar Klavan.

The centre-back registered a maiden strike for Liverpool following his move from Augsburg in the summer by sweeping home the opener in last Tuesday’s 3-0 EFL Cup victory at Derby County.

Four days later, he followed that up with a first start at Anfield as the Reds notched up a commanding 5-1 triumph over Hull City on Saturday.

“It was something special in my life again,” Klavan told Liverpoolfc.com during a chat at Melwood. “Scoring a goal is always nice because as a defender it does not happen so much. You could see it in my celebration, it wasn’t so brilliant!

“Then I moved on and had my first game at Anfield and that was something amazing because two weeks before, when I was on the bench during my first time at Anfield [against Leicester], I had goosebumps. So to then go onto the field and play for this amazing crowd made it a good week.”

Saturday’s emphatic triumph over Hull made it four wins on the bounce for Liverpool, enhancing the feel-good factor currently reverberating around Anfield.

Klavan believes he immediately sensed the potential within the squad when he arrived for pre-season training in the summer and is, therefore, hopeful about the Reds’ chances of success.

“When I first joined and went with the team to America when we had the training camp and pre-season there, you could already see what the coaches want and the motivation level of the players,” said the 30-year-old. “You just got the feeling we were building something good and strong.

“The new stand is something of beauty at Anfield. We’ve had two home games this season and they’ve been really, really good ones. The fans have been fantastic and I hope it continues the same way throughout the season.”

Next up for Klavan and Liverpool is a trip to the Liberty Stadium to tackle Swansea City on Saturday lunchtime.

The Swans currently sit 17th in the table having tallied four points from their opening six games, but the Reds defender doesn’t believe those stats tell the full story.

Klavan explained: “They only have four points but it doesn’t show the kind of quality they have there. They have a good team and they play good football.

“The results have been a little bit unlucky for them, but it doesn’t mean they’re a bad team. They are a really good team in my eyes.”