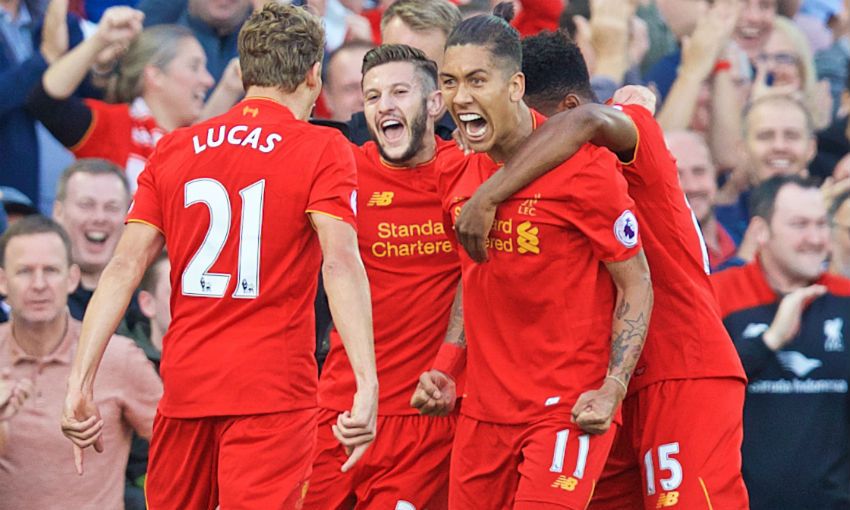 Liverpool marked the opening of their new Main Stand with a comprehensive 4-1 victory over Premier League title holders Leicester City at Anfield on Saturday evening.

In front of a crowd of 54,000, Roberto Firmino gave the Reds the ideal start when he found the target after just 13 minutes, collecting James Milner’s delivery into his run and finishing with aplomb.

Sadio Mane then put the finishing touches to an outstanding team move to enhance the hosts’ advantage when he lifted Daniel Sturridge’s clever back-heel over Kasper Schmeichel.

Jamie Vardy lifted Leicester hopes when he benefitted from a wayward pass across the face of goal from Lucas Leiva to convert into an empty net, but Adam Lallana restored Liverpool’s top-goal cushion in the early stages of the second half when he emphatically netted from Georginio Wijnaldum’s lay-off inside the box.

And Firmino made certain of victory when he steered into the net after Mane had beaten Schmeichel to a ball forward and squared for his fellow forward to slide in ensure life at the new-look Anfield began in the best possible fashion.

The teamsheet confirmed two changes for Liverpool from the draw at Tottenham last time out, with Lucas and Sturridge coming in for Dejan Lovren and Philippe Coutinho.

Coutinho was named on the bench, while Lovren missed out altogether after sustaining a bang on the head during training on Friday, though thankfully the defender did not suffer a concussion.

An historic day in Liverpool FC’s history began with Leicester looking to silence the early noise inside the redeveloped Anfield with an early spell of pressure; however, the hosts soon began to assert their grip on the contest.

And with 13 minutes on the scoreboard, the Reds took the lead with a goal of beautiful simplicity from Firmino.

Milner collected the ball on the left touchline as Sturridge dragged two defenders out wide with a run. Spotting a Firmino dart inwards, the vice-captain fed the ball into the Brazilian, who expertly side-stepped Robert Huth and beat Schmeichel with a low reverse finish.

Jürgen Klopp’s side were by now firmly in control and Leicester had their goalkeeper to thank for preventing a second on 26 minutes. A one-two inside the box between Lallana and Mane resulted in the latter squaring for Sturridge, but his instinctive effort was foiled by a reflex stop from Schmeichel.

But just after the half-hour, Liverpool did increase their advantage – and again, it was an effort of sublimity.

Lucas played the ball forward to Firmino, who instantly laid it off to Jordan Henderson. His first-time forward pass picked out Sturridge’s sprint into space. With Wes Morgan for company, the England forward back-heeled into the path of Mane’s supporting run, and he did the rest by gently lofting over Schmeichel.

But with Liverpool cruising, Leicester were inadvertently handed a way back into the game when Lucas’ misplaced pass across the face of his own goal evaded Simon Mignolet and rolled into Vardy, who slammed into the empty net.

And soon after, Huth was inches away from restoring parity when his looping header from Luis Hernandez’s long throw in clipped the top of the crossbar.

The teams emerged for the second half with Leicester holding a renewed sense of optimism towards taking something back to the Midlands with them this evening.

However, the Reds settled into their stride once more and grabbed a third goal 11 minutes after the re-start when Sturridge fed the ball into the direction of Wijnaldum’s burst into the area. The Dutchman held it up before nudging right it to Lallana, whose instant thump into the top corner was as emphatic as it was welcome.

Still, Claudio Ranieri’s men almost mustered an instant riposte, but Mignolet did superbly to deny Vardy’s low shot with his boot when faced one-on-one with the visitors’ No.9.

With the game edging towards its conclusion, the reigning champions threatened with a succession of set-pieces – and Klopp elected to introduce both Coutinho and Kevin Stewart for Sturridge and Wijnaldum.

At the other end, back came the home team and Henderson struck over the bar when Firmino’s pull-back rolled invitingly for him on the penalty spot before Schmeichel denied Mane a second with a sprawling stop.

Nevertheless, the Reds were not to be denied a fourth and it arrived with a minute of normal time remaining when Mane beat Schmeichel to a ball forward from Lallana and squared for Firmino to slide into an empty net, sealing the perfect opening to life at a bigger Anfield.