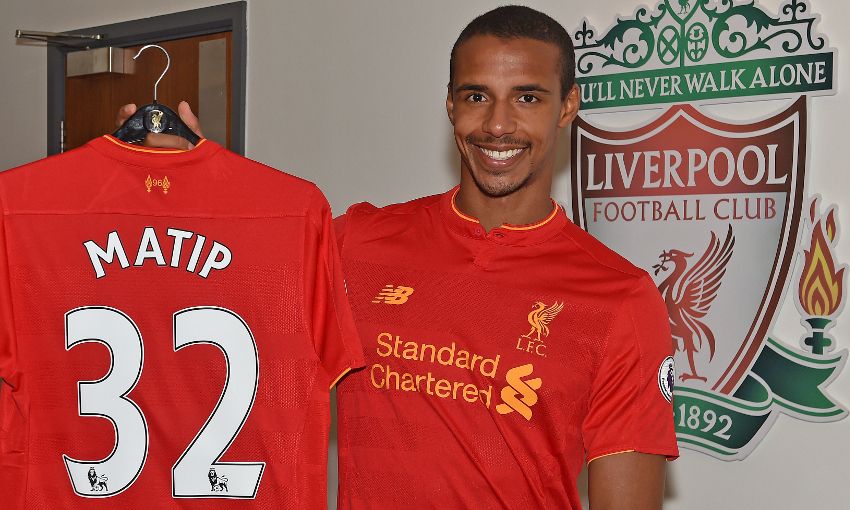 As Liverpool produced their stunning comeback against Borussia Dortmund last season, Joel Matip watched his television screen in a mixed state of awe and excitement – and now he can't wait for his own journey down Anfield Road.

The stunning 4-3 victory over the Bundesliga side was perhaps the highlight of the 2015-16 campaign for the Reds as Dejan Lovren’s last-gasp Kop end header sparked scenes of unbridled jubilation inside the stadium.

Knowing he was heading to Merseyside just a few months later following the expiry of his contract with FC Schalke, Matip couldn’t help but look forward to his own opportunity to play in front of the Kop.

“I saw it – it was fantastic,” the centre-back told Liverpoolfc.com on his first day at Melwood. “It spoke [volumes] for Liverpool. It was a specific example of Liverpool.

“I was happy [at the thought] that I could maybe be a part of this next season.

“I am very excited to play at Anfield. It will be a very special feeling. I can’t wait to go down Anfield Road and into the stadium – I can’t wait for it!”

Matip reported for his first day at Melwood on Saturday as Liverpool began pre-season training – and immediately sat down to give his first interview as a Red to the club’s official website.

If you’re an LFCTV GO subscriber, you can watch the five-minute chat in full now by clicking play on the video below. Not signed up? Click here to do so.

Alternatively, read on for the full transcript.

Joel, welcome to Liverpool. How does it finally feel to be here?

It’s a great pleasure and honour to be a part of this big club.

How have the last few months been for you, knowing that you’d be coming to Liverpool this summer but still with a job to do for Schalke?

How much of a factor was Jürgen Klopp in your decision to move to Liverpool?

There were many points: the coach, the club, the supporters… everything was good. It was a good and simple decision for me.

On Jürgen specifically, you obviously played for Borussia Dortmund’s great rivals Schalke, but what did you make of him from his time in Germany?

He is a great coach. His teams speak for themselves. I am happy I can now train and play with him.

What has the manager said to you about Liverpool?

He said I have to develop and work on myself, but when I do this I can play a good part in this team. 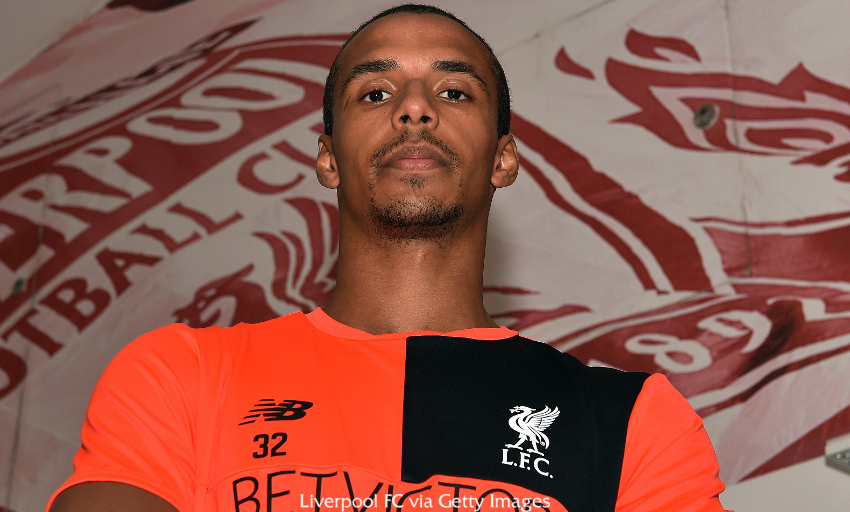 Did you need much convincing to decide Liverpool were the right club?

Were there mixed emotions at the end of the season – excited to move to Liverpool but sad to leave Schalke?

Yes, of course. I was a little bit sad about leaving Schalke but very happy and excited to join Liverpool at the same time.

So, what makes Liverpool the right club for you?

This is a big and famous club – famous for its supporters and its history. Everyone knows Liverpool.

How did it feel today driving into Melwood to begin your new career here?

It was a special feeling as it always is on the first day at the club. But [coming here] today at Melwood – it’s a special moment. 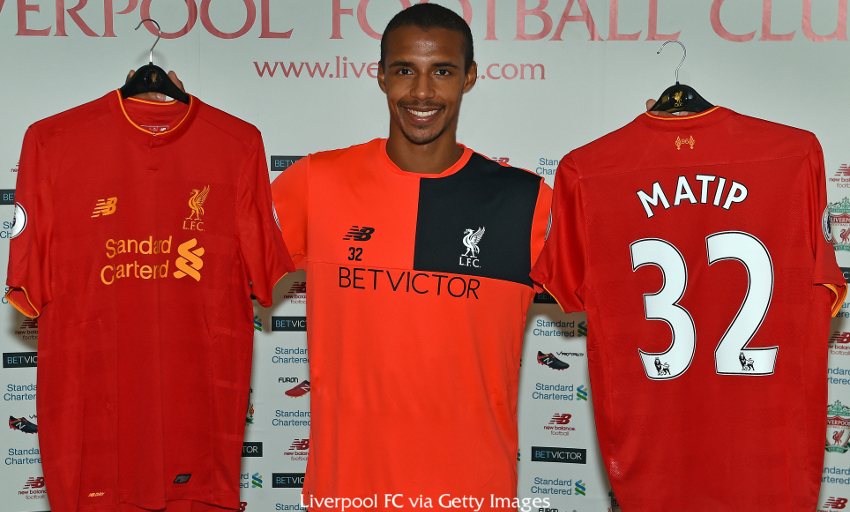 Are you the kind of player who enjoys pre-season training? It’s obviously very difficult for the lads as you build up your fitness…

It belongs to our job. It’s not the best part, but it is necessary to play well and be fit for the season, so I like to do it.

How would you describe your playing style for fans who maybe haven’t seen you play?

I am a defender and whether it’s in the air or the ground, I think I am a good defensive player. I am always looking in front and want to play in front. And I am always good for a few goals!

It’s often said the Premier League is the one of the most physical in the world – do you feel ready for the challenge ahead?

There are many similarities between the Premier League and Bundesliga – do you believe that will help you adapt quicker at Liverpool?

Of course, the Bundesliga is at a high level. Maybe it’s a different level, but it’s also a high level and I think I have got enough to play here.

Is the physical work something the coaching staff and Jürgen have asked of you, or is it something you’ve decided to do yourself?

I decided for myself, but I think they will help me reach this level and to be fit for the new season. 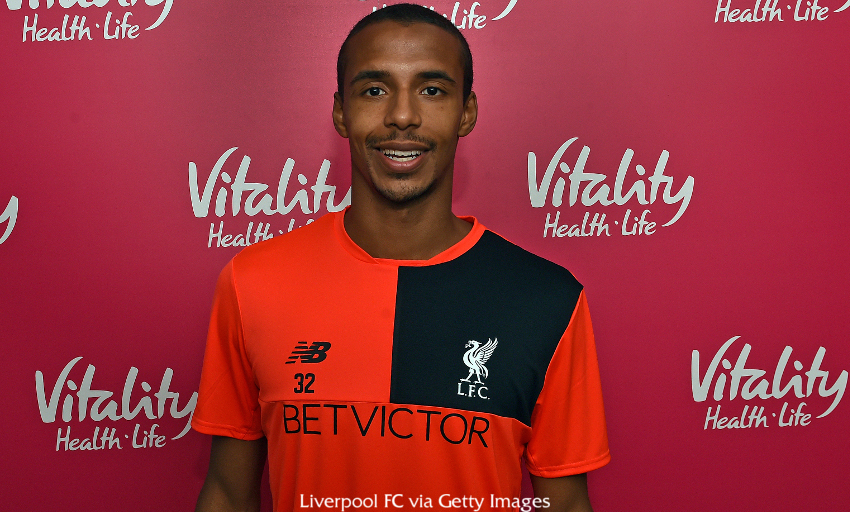 You’re still only 24, so still a young player. Is this the right club to help you develop and take you onto the next level in your career?

I hope so. I also thought of this and I think this is the right step, the right club and I am very happy to be here.

Did you watch Liverpool a little more closely over the last few months, knowing you were coming here this summer?

Yes. Before I watched a lot of Premier League, but after this [agreeing to join Liverpool] when there was a possibility to watch a game I always did.

Did you see the great games with Borussia Dortmund, for example?

Yes, I saw that. It was fantastic. It spoke [volumes] for Liverpool. It was a specific example of Liverpool.

Watching that game on your television and hearing the noise of the fans, how did that make you feel?

I was happy that I could maybe be a part of this next season. I am very excited to play at Anfield. It will be a very special feeling. I can’t wait to go down Anfield Road and into the stadium – I can’t wait for it!

Finally, for the Liverpool fans watching this, what would your message to them be?

That it is a pleasure and an honour to be a part of Liverpool and I will do anything for us to be successful.