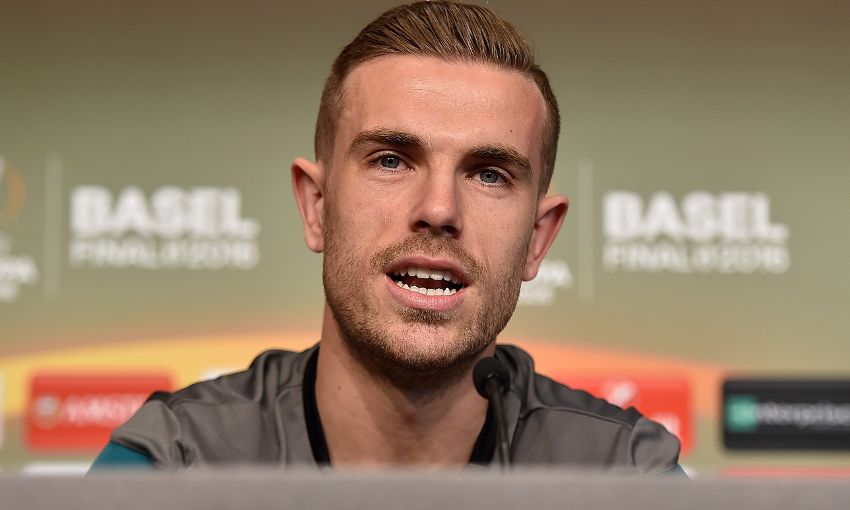 Jordan Henderson spoke to the media in Basel this afternoon to discuss his fitness for the Europa League final, why playing in such a game was a childhood dream and what it would mean to beat Sevilla.

Read on for a transcript of the captain’s chat with the press at St. Jakob-Park.

How is the injury and how ready are you to start this final?

The injury has been good. In the last few weeks I’ve progressed really well and I’ve trained a few times. I managed to play 25 to 30 minutes at the weekend. So I feel good and I’ll play as long as the boss wants me to.

What would winning a trophy do for Liverpool moving forward?

It’ll be huge for the team, for the fans, for the club, for everyone involved. We know it’s a big night but one we’re very excited by. It’s a great opportunity for us to win a trophy and I think we’re very capable of doing that. That’s all we’re focused on.

How do you feel this match is going to go, given that you and Sevilla are in the same position of needing this to have European football next season?

I don’t know exactly how it’s going to go but we’ll have a game plan and what we want to do. We’ll focus on that. I’m sure if we can do that and perform to the best of our ability, we’ll have a very good chance of winning the game. That’s all we’ll be focusing on.

Could you explain the importance of playing in a European final for Liverpool Football Club?

It’s everything you dream of as a footballer when you’re a young boy and playing in the street with your friends. You dream about playing in cup finals and European finals. This one is no different. It’s a huge night for everyone involved and every single player will want to play in it.

Do you know if you’re starting yet? When do you expect to find out?

We don’t know the team. It will probably be a few hours before the game, like always. I don’t expect to start. I know I’ve been out a long time. I’ve only played 25-30 minutes. When I’ve been injured the team have done very well, they have done very well to get to this point and played some big games. At the same time I feel good and hopefully I’ve been OK in training and OK in the game the other day. I’m ready to play as long or as little as the manager wants me to.

How would you sum up the progress that has been made over the course of the campaign?

From the start of the season when the manager came in, he has put a spirit, belief and mentality through not only the players but the fans and the whole club. That has built throughout the last six or seven months he has been here. We have gone up a level – the whole team. Every single player has gone up a level. We’re here, we’re in a European final on a big stage and hopefully we can perform like we have been in the last few months. If we do that I’m very confident we can win the game.