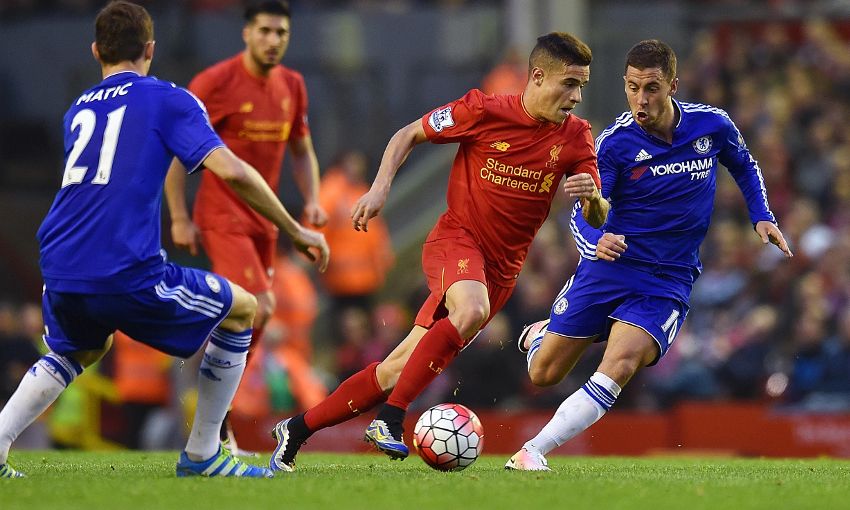 Liverpool's final home game of the season ended with a draw as Christian Benteke's stoppage-time goal rescued a 1-1 result against Chelsea at Anfield on Wednesday night.

Eden Hazard put the Londoners ahead in the Barclays Premier League contest, having quelled the hosts’ early dominance with a first-half strike all of his own making at the Kop end.

The Reds took to the task of finding a way past Guus Hiddink’s well-organised unit and finally did so in the closing minutes, Benteke converting when Asmir Begovic failed to deal with Sheyi Ojo’s cross.

The manager again named a much-changed side, reverting to the starting line-up that began last week’s Europa League second-leg victory over Villarreal.

There was a change in uniform for the Reds as they wore their new 2016-17 home kit for the first time, but the approach to the game was no different – intense pressing in the opposition half and an instant turn towards goal.

Daniel Sturridge dwelled a touch too long for his own chance so instead fed the supporting Alberto Moreno to square for Philippe Coutinho, whose strike was bound for the net until blocked by Baba Rahman.

An alert dive by Begovic was required to keep out Adam Lallana’s diagonal effort and Dejan Lovren flicked a header wide from a corner.

Pedro provided a reminder of the talent in Chelsea’s attack as he burst through the middle into a shooting position, only to find Kolo Toure standing firmly in his way.

With taunts from the visiting section acting merely as added motivation against his former club, fast footwork from Sturridge released Roberto Firmino to scamper forward – yet the Brazilian’s final touch ran astray.

And when the deadlock was broken in the 31st minute, it was at the other end.

There seemed little danger as Hazard held onto possession in the left channel, but the Belgian soon side-stepped a succession of challenges and placed a shot into the far corner from the left edge of the box.

Coutinho had a swerving hit pushed away by Begovic, though Bertrand Traore should really have doubled the Blues’ lead six minutes before the break rather than swiping over after running in behind and seeing Simon Mignolet hesitate.

After Liverpool had been on the front foot for much of the first 10 minutes after the restart, Hazard was close to a similar second as he again dribbled through.

This time, however, Mignolet was down quickly to get a hand on the ball and scoop it in before a Chelsea player could seize upon a rebound.

Sturridge’s eyes lit up on the hour mark as Lallana’s inviting reverse pass freed the England striker to pick his spot inside the area. But Begovic was equal to it and made an excellent save to preserve his team’s advantage.

As time elapsed and the Kop urged for more, Lallana was unable to convert Moreno’s dipping cross to the back post and Traore drew another diving stop from Mignolet.

Klopp sent on Joe Allen and Benteke in a double switch with 16 minutes remaining and the Reds continued to put pressure on the Blues.

And just as it seemed the cause was lost, Ojo sent in a cross from the left which Begovic could not take properly and Benteke pounced from yards out to secure a point as the team said farewell to Anfield for another season.