‘A genius moment’ was Jürgen Klopp’s summation of the Philippe Coutinho Old Trafford wonder goal that sent Liverpool into the Europa League quarter-finals at the expense of Manchester United on Thursday night, as he admitted it ultimately decided the outcome of the tie.

The Reds made the short journey to the home of their old rivals holding a 2-0 lead from last week’s initial meeting at Anfield.

That advantage was reduced when Anthony Martial fired home a penalty midway through the first half after he was tripped by Nathaniel Clyne inside the area.

Leading 1-0 on the night, United sensed a comeback, but their hopes were dashed by an outstanding solo effort from Coutinho in first-half stoppage-time.

And despite Liverpool threatening to score a second goal after the break on several occasions, there were to be no further impressions on the scoresheet – though that mattered little as Klopp and his men booked a place in the last eight with a 3-1 aggregate win.

“We knew they would show a reaction and it was much more intensive from Manchester United than in the first game,” the boss told his post-match press conference.

“We had a little problem in the first half with second balls – they won too many second balls. Usually it’s a 50/50 situation, but in the first half I think it was 70/30 for United. But when we got the ball and used the time we had – because we had a lot more time than we felt in these moments – when we played football and came through it, we had brilliant moments. We created wonderful chances, big chances, but De Gea had another good night in his successful career.

“They got the penalty – I think it was a penalty – then Phil had a genius moment. Wonderful. I loved these two minutes before half-time because twice we reacted quicker than the opponent. There was the discussion for the free-kick, Hendo played the ball, had a counter-attack but missed the last pass, like we did in the second half a little bit more often. We had to run back but were again quicker in mind.

“Then Phil used the situation – it was a brilliant moment and decided the game tonight.” 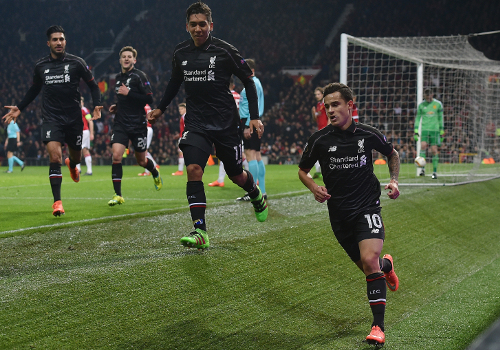 Coutinho’s goal was a real stroke of mastery from the man nicknamed ‘The Magician’ by fans and his teammates.

Collecting James Milner’s low ball down the left, he cut inside the area, bypassed Guillermo Varela in the blink of an eye before nonchalantly flicking the ball over David de Gea’s shoulder at the near post.

Asked by one journalist for a review of Coutinho’s performance, Klopp replied: “You’ve known him longer than I’ve known him so maybe you know everything about him.

“He had a lot of good moments in the first half – from a working side it was one of the best I’ve ever seen. It was really good, it was a little bit like at Man City. It was really brilliant.

“Then he had this moment when someone played a perfect pass – I’m not sure who played it – and his first touch was not too good. With his technique, usually it is a big chance, so you saw on his face it’s not too easy for him to handle this. He has to trust more in himself because it’s clear with his quality he will always get another one [chance].

“It was brilliant what he did. It was the most unexpected thing you could do in a situation like that – it was a perfect goal.”

At his pre-match media briefing on Wednesday, Klopp explained how he wanted to train at Old Trafford the night before the return leg to allow himself to imagine how events might unfold.

While Liverpool progressed into the quarter-finals, the German felt there was some room for improvement.

He smiled: “What can I say? In my dreams I win all my games! It was a draw but we are through. It was good. It was intensive. We deserved the next round, there’s no doubt about this and that feels really good. It was really hard work again.

“In the future, not against Man United maybe because that will always be intensive, but in the future we have to be a little bit more clear. You see all the counter-attacks in the second half, we had five players but played the last pass with no chance to get the ball and then we had to run back. I don’t know how many metres we collected tonight because of bad passes in the last moment.

“That’s not too smart – but the rest was really, really good. It was an intensive fight against a big opponent… Cool!”

Liverpool’s preparations for the clash with United suffered a blow when Alberto Moreno picked up a knock during training, meaning Milner deputised for the Spaniard at left-back.

Klopp continued: “I said before the game, we are not in the worst moment since I’ve been here. I said it and then in the next moment Alberto Moreno got a little injury. We are not sure, we did not go and risk. Maybe it is nothing. We will know more tomorrow.

“You see the movements with the team, the timings, a lot of things are better. The most important thing is we have players on the bench who are 100 per cent fit –100 per cent fit – and there are really difficult decisions to make, and that’s the best thing a manager can have.”

Another fitness concern for Liverpool was Jordan Henderson, who was withdrawn during the second half due to illness.

Klopp revealed: “It was something in the game and at half-time he vomited and then said he felt better. I think everyone knows this feeling – after vomiting you can feel better! Second half he tried, but it was clear [he needed to come off].

“Joe Allen is in a perfect situation, but Man United with a lot of headers, we had to think for as long as possible Hendo should be on the pitch. Now we have to see [how he is].”

Following a night to savour at Old Trafford, Liverpool will now take their place in Friday’s Europa League quarter-final draw alongside a host of strong teams – including Borussia Dortmund.

So how would Klopp fancy a meeting with his former club?

He smiled: “Dortmund? Of course not. Why should I want the strongest team in the tournament in the next round? I’m not so silly. But if we go there then we will try to win.

“I’m pretty sure there is no easy game anymore, so it’s not too important [who we draw]. We have to be prepared.”