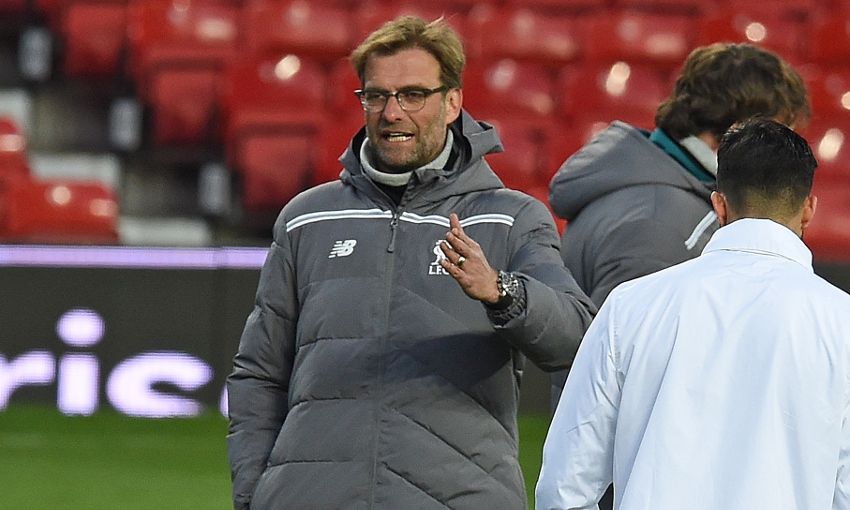 Jürgen Klopp has acknowledged that 'anything can happen' in the second leg of Liverpool's Europa League last-16 clash with Manchester United, but insists his team should relish the opportunity that awaits them at Old Trafford on Thursday evening.

The Reds hold a 2-0 aggregate lead going into the return fixture against Louis van Gaal's men after an outstanding Anfield performance last week put them in control of the tie.

Klopp was keen to emphasise that he is fully aware that first-leg advantage is not a decisive one, given the unpredictable nature of football.

But the boss also talked up the importance of his side appreciating the fact they are only a hard-fought 90 minutes away from reaching the quarter-finals and have the chance to shape the nature of the second leg in Manchester.

"It's football, the ball is round and everything can happen," he told reporters at a press conference to preview the clash.

"I’m not scared or something like this, I'm not afraid. We have the chance and we [did] the best thing we could do in the first game, we made our position a little bit better.

"It’s better now because it’s tomorrow, we don't have to wait another five days for the game. We want to take this chance for us, that’s all.

"At the end, you know, if you want something with all you have it doesn't mean you get it. We know this because a lot of times in our lives we didn’t get what we wanted but tomorrow we have a chance to work for it and that's what we try to do."

LFCTV GO subscribers can watch the press conference in full above

Klopp has now overseen two games between the Reds and their arch-rivals from down the East Lancs Road, losing 1-0 at Anfield in January before gaining revenge last time out in Europe.

And the German says his players should be encouraged by their performances in both those games, which suggest United won't turn the tie around too easily on Thursday.

“I’m absolutely optimistic and before a game I always have the best feeling, but the problem is I lost a few games after having a very good feeling!" he joked.

"That's not too important. It’s football and, since I’ve been here, tomorrow is the third time we have played against Manchester United.

"We were always in the game in all three games so that's an important sign for us - the world doesn't change overnight.

"It’s absolutely clear there’s a chance for Manchester United, that's football, anything can happen. But we know that we know how to play them, that's another truth.

"I don’t think too much about what will happen tomorrow night, we have a few hours to prepare ourselves."

The manager could also barely hide his excitement over the prospect of going head-to-head with Van Gaal's team once more in one of the most famous fixtures in world football.

"I am really looking forward to it. As I said before the first leg, in football it’s one of the best things you can do – to play against Manchester United, especially when you are the manager of Liverpool," he added.

"That’s great and we want to take the full package so we came here today, we will train at Old Trafford, tomorrow another session and then we want to play. That’s what we were preparing for the whole time.

"We look good in this moment, [but] we know about the job we have to do and it’s always difficult. The circumstances are different now, everyone thinks about what’s the problem with 2-0, what’s the situation, Manchester United will strike back.

"We would have come here if we’d lost 3-0 in Liverpool and then we would want to take the chance [to bounce back] if it was possible. Now we are 2-0 in the lead, that is only one thing and now we have to forget this and play again.

"In the end, it’s a football game and a really good one between two really good sides. I am really excited about the opportunity to play it."