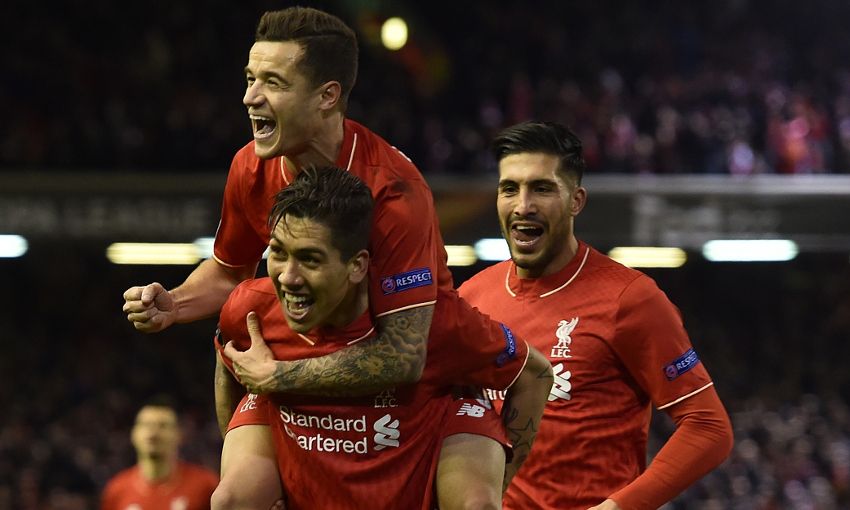 Liverpool produced a sensational performance to take a 2-0 lead in their Europa League tie with rivals Manchester United on a night to remember at Anfield.

A Daniel Sturridge penalty in the first half and Roberto Firmino’s latest goal in the closing stages were the key moments in a display that would have brought even more were it not for David de Gea in the opposition goal.

Jürgen Klopp made three changes to the side that had started against Crystal Palace in the Barclays Premier League on Sunday – with Nathaniel Clyne, Coutinho and Sturridge coming into the line-up.

With the sound of an extended and booming version of ‘You’ll Never Walk Alone’ ringing in their ears, the Reds kicked off the contest at a pace to match, attempting to pin back the away team in the same manner they had Manchester City last Wednesday.

And though they were made to wait 20 minutes, Klopp’s charges gained the lead their efforts deserved when Memphis Depay tripped Clyne as he ran onto Firmino’s pass and the referee pointed to the spot.

Sturridge immediately took responsibility for the kick and sent a side-footer into the left hand side of the net despite a touch from De Gea along the way. Anfield erupted.

But the Spaniard refused to be beaten three minutes later, somehow recovering to claw Coutinho’s close-range effort away from the goalline after Sturridge had rolled a cross-shot to the back post.

And De Gea was at it again shortly after the half-hour mark. Firmino found Sturridge with a diagonal pass from the right that Chris Smalling missed, only for the goalkeeper to rush out and block the No.15’s blast.

The next man to be thwarted by the United stopper was Lallana, who raced to the front post to redirect Firmino’s delivery into the box but was denied by a stunning reaction save.

Louis van Gaal introduced Michael Carrick at the beginning of the half as part of his plan to stem Liverpool’s momentum and the visitors did gain more of a foothold in the game in the early stages.

But De Gea was the difference once more in the 54th minute, leaping to get hands on a dipping half-volley that Coutinho had launched with force from the left corner of the United penalty area.

The tempo of the match reached a phenomenal level as the hour mark passed by and both sides were now fully committed to wave after wave of attacks, though without the perfect final touch.

Klopp then opted for his first change of the evening – Joe Allen was brought on for Sturridge and Firmino, impressive yet again with his energy and work-rate, moved even further forward.

Clyne whacked an angled drive from the right that was an easier stop for De Gea and Jordan Henderson placed a side-foot strike past the upright having been teed up by Lallana’s persistence.

Anfield sensed there was a second for the Reds and it duly arrived in the 73rd minute as Firmino continued his sensational form in front of goal.

A rapid counter-attack saw Henderson run clear along the right flank and his ball into the box allowed Lallana to set up the Brazilian to prod a finish beyond De Gea’s reach.

Watch Liverpool in style with some fantastic hospitality packages to suit your budget. Click here to find out more.