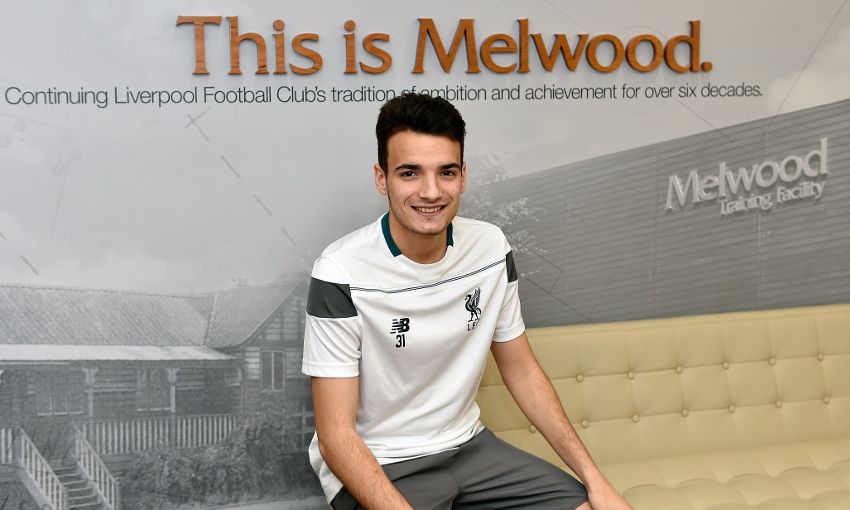 Pedro Chirivella is determined to make a new contract just a stepping stone in his Liverpool career and build on the development that brought a first-team debut this season.

The midfielder penned an extension to his Reds deal at Melwood this afternoon, exactly a month after making a maiden senior start at West Ham United in the FA Cup.

Once the formalities were complete, Chirivella sat down with Liverpoolfc.com to reflect on his journey to this point, the helpful advice he has been given by Lucas Leiva and others, and what he hopes to achieve in the future.

Read on for a full transcript of the interview.

Congratulations on the new contract – tell us how it feels…

It feels really good. I have worked really hard in the last year. I’m very proud to sign a new contract with one of the best teams in Europe.

Did it come as a surprise?

Yes, to be fair. I was just training hard and playing well; when they told me, it was a big surprise for me and I’m really pleased.

With each year that passes, is there more pressure to perform and earn a new deal?

The first couple of years were difficult for me as I tried to adapt to English weather and English football. But I have been here three years now and I feel really good, so everything is going well on and off the pitch.

What were the challenges when you came over from Valencia, coming to a new country and a new club?

When Liverpool wanted me to sign here, I had no doubt about it. But when I came here, I needed to perform really well because the club trusted me and I had to give them a reason why. With pressure and [being] away from family, there are a lot of things that make it difficult, but now I’m pleased to be doing really well here.

Can you quite believe what has happened to you since you got the call to go on the pre-season tour?

No, it has gone so quick. The first time I went on the tour in pre-season was an unbelievable experience. Now, seven or eight months later, I’m here signing a new contract, so it’s unbelievable and I’m really happy.

What developments do you think you made on that tour, with the new bits of guidance you were given?

It gave me a lot of experience, travelling a lot and training really hard. I improved the physical elements of my game and tried to play my best.

Your opportunities have intensified under Jürgen Klopp and you are clearly a player he really likes?

I just keep working hard and training well, and I try to impress him every day in training. He has told me to improve without the ball, that with the ball I am a really good player but I need to concentrate and focus without the ball. Hopefully I can do it.

Your family – dad and little sister – are here as well. When you sign a contract, does it feel like part of repaying the commitment for them to come with you?

Of course. I feel really happy after three years here. It was a big move for me and my family; my mum and little brother are back in Spain and this is also for them, I’m really happy for them as well.

What was your first phone call after you signed the contract then? How did your parents react?

My dad was here so he sat with me. I just phoned my mum to say thank-you to her because she has done a lot of things for me, so I’m really grateful.

Who has been the biggest influence on you from the youth set-up as a coach?

I have had a lot of good coaches and I talk a lot with them. In my first couple of years with Neil Critchley, he helped me a lot. I had a lot of problems with my ankle and he tried to keep my mind clear. I’m really grateful for all the advice he gave me. And of course, Michael Beale – he has made me an important part of the U21s this season. So I’m really happy.

He has been a really good help for a lot of the young players. And for me especially – he speaks Portuguese and I speak Spanish, they are quite similar and we understand each other. I have a lot of confidence in him, we talk a lot, and I’m really grateful.

The Europa League has been huge for opportunities and you came on against Bordeaux. What were those experiences like?

It was the best moment of my life to make my debut for Liverpool. I’m travelling as well, even if I’m not on the bench, just gaining experience travelling with the best players. It has been great.

Who have you got close to in the first team? Have players been giving you advice?

Yes, from the first day in pre-season. Everyone has tried to help me and give me advice. I would say Lucas has been the biggest help for me, he has been brilliant. Every day he has new advice for me.

The FA Cup gave you an opportunity at West Ham United. How do you look back on that game?

It’s something I will never forget, my first start for Liverpool, against a great team. We did well and didn’t deserve to lose the game. But we move on now and try to focus.

Do you set targets from here?

For me, to now keep working every day. I see everything as day-by-day; keep playing for the U21s, keep doing my best and when I get my chance for the first team, just try to impress. I think things will get better.

It has been a great couple of months for the Academy, with a lot of minutes for the first team. All of the U15s and U16s that look at us just need to keep working and if they work hard and good, their chance will come in a couple of years.