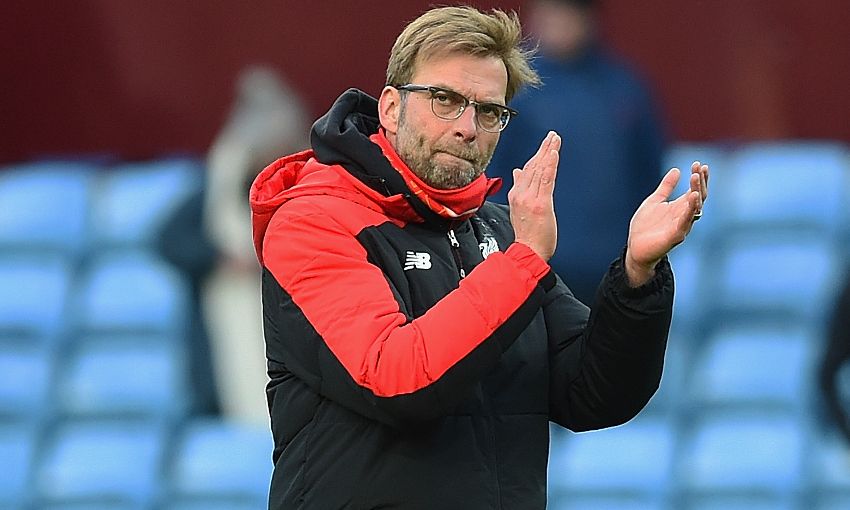 Jürgen Klopp felt there were plenty of elements of Liverpool’s performance to savour as they swept aside Aston Villa with a commanding 6-0 victory at Villa Park on Sunday afternoon.

The Reds were in simply irresistible form as efforts from Daniel Sturridge and James Milner handed them a two-goal advantage at the half-time break.

The final scoreline was given an emphatic feel as Emre Can, Divock Origi, Nathaniel Clyne and Kolo Toure found the net after the interval to help secure an imperious win in the Midlands.

Klopp told his post-match press conference: “We knew about the importance of the game in our situation and in the situation of Aston Villa too, with the results and number of games [left]. There are only 12 games left, so in Aston Villa’s situation you have to take points.

“We’ve saw them playing their last few games and they’ve played really good, they’ve played good football. We knew that it would not be too easy, but we played well, we defended well and scored the goals in the right moments.

“2-0 at half-time is a good result, even when you had a two-goal lead a week ago and gave it away! It is one of the best results in the world at half-time, but the only thing we have to do is carry on and make a few things better because there were a few moments where Aston Villa came through, they had crosses and while they weren’t real chances, it was more dangerous than it should have been.

“We came out and did well again, scored more goals and won 6-0. It [doesn’t happen] too often in a manager’s life, so we should keep it for bad times. It was a good game for us, a result for the soul, for the table, for our goal difference, so everything was good.”

He added: "It's perfect for the boys that it makes sense to work in this way and it was good, but it's not a day to sing songs or things like this, for us. That's partly respect for Aston Villa, a great club in a difficult situation. We came here and won the game so that's important for us. But on the other side, if one team wins 6-0 another team loses 6-0 and that's not too nice for them. So it's a good day for us and a hard day for Aston Villa."

The contribution of Sturridge on his first Barclays Premier League start under Klopp was cause for much encouragement.

The striker required just 16 minutes to head Liverpool in front from Philippe Coutinho’s unerringly accurate cross, and figured for over an hour before being replaced by Origi as he works his way back to full fitness.

“We need the goals of Daniel and he needs the goals, that's clear,” said Klopp. “It's not a surprise that he can score goals of course but it's a surprise how well tuned he is with the team when he starts. With his movements, he's a real striker, that's good to see.

“When he hides himself on the pitch [from the defenders] it's really difficult for the last line to defend if he's always somewhere and you don't know where his next move is. That's very important for us and changes a lot of things, of course, but we can only speak about this when he's available. When he's not then we cannot say, 'with Daniel it would have been different'.

“But today was brilliant and you saw he was not too happy when we took him off! Everything was okay but it was not like he gave a sign or something like this, but I think it made sense to take him out after 60 minutes. It was perfect for him and hopefully he's available for the next game too.”

The returns to action of Sturridge, Coutinho and Origi in the last week have significantly bolstered Liverpool’s attacking possibilities, but Klopp was eager to point out the Reds were still not at full strength.

“We know about our problems what we’ve had, but we believe in our work, we believe in the squad and in our way. Today we got the benefit, that’s how it is sometimes.”