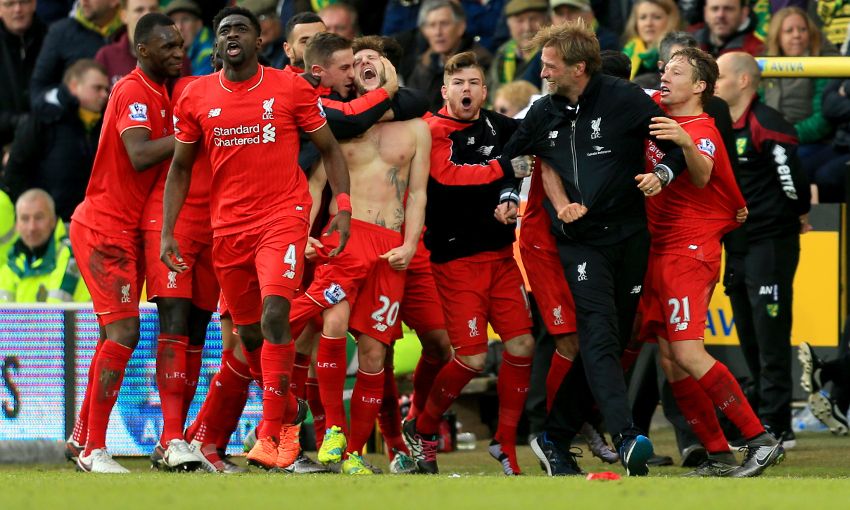 The England midfielder netted with virtually the last kick of the game to clinch three points for the Reds, just moments after Sebastien Bassong had levelled for the Canaries in injury-time.

Roberto Firmino had opened the scoring after 18 minutes, finishing neatly across goal from James Milner’s reverse pass inside the area.

Norwich were level just prior to the half-hour when Dieumerci Mbokani netted with a backheel inside the six-yard box after the Reds failed to clear their lines from a corner.

Hoolahan then furthered Norwich’s lead from the penalty spot in the early stages of the second half after Alberto Moreno had tripped Naismith inside the box.

Nevertheless, Jordan Henderson immediately reduced the arrears when he hooked in Nathaniel Clyne’s centre and Firmino made it 3-3 when he applied the finishing touch to a sweeping counter.

Milner then put Liverpool back in front, latching on to Robbie Brady’s under-hit back pass and finishing coolly.

But with the game in stoppage-time, Norwich thought they’d rescued a point when Bassong struck low into the back of the net from the edge of the area; however, with one final throw of the dice from the visitors, the ball fell for Lallana, who crashed a half-volley into the turf and over Declan Rudd to send the travelling supporters into ecstasy.

Liverpool elected to make just one change to the starting line-up to the team deployed in their last Barclays Premier League outing against Manchester United last weekend, with Jordon Ibe coming into the team and Lallana dropping down to the bench.

The Reds went into the lunchtime kick-off aiming to try and make up some ground on the teams above them in the race for a top-four finish following that Anfield defeat to United six days ago.

With Carrow Road bathed in January sunshine, the contest began slowly with the hosts looking more threatening in the opening exchanges.

However, it was Liverpool who eventually took the lead with their first attack of note. A well-worked move involving Ibe and Milner culminated in the latter slipping a reverse pass into the path of Firmino inside the box. The Brazil forward slid the ball across goal beyond Rudd to find the net via the post.

The Merseysiders’ advantage should have been doubled soon after when Milner capatilised on a gap in the Norwich defence to race through on goal; however, he was thwarted by a challenge from Graham Dorrans as he delayed his effort.

Moreno then flashed a driven free-kick inches wide of the post, with the Reds now in the ascendancy and control.

But, Norwich drew level on 29 minutes. A corner into the area resulted in a succession of headers before the ball fell for Mbokani. Facing away from goal, the striker held off the attentions of Mamadou Sakho before beating Mignolet with an improvised backheel from close range.

Then, with half-time looming, they went ahead as Hoolahan’s ball sent Naismith into space inside the area, who emphatically drove an effort into the far corner from a tight angle.

Norwich then extended their advantage with eight minutes of the second half played. Moreno tripped Naismith in the area, enabling Hoolahan to convert from the spot.

However, within seconds, Liverpool reduced the deficit when Henderson clinically hooked Clyne’s right-wing delivery beyond Rudd from 12 yards, leaving it all to play for with more than half an hour to go.

Jürgen Klopp elected to replace Ibe with Lallana in the aftermath – and the substitute’s impact was instant as the Reds made it 3-3.

Collecting Milner’s knock-on down the left, the England midfielder scampered into space before delivering to Firmino in the centre. The No.11 did the rest as he retained his composure to dink the ball over Rudd and claim his second of the afternoon.

And it appeared Liverpool’s comeback was completed when Brady’s attempted back pass only succeeded in finding Milner, who raced through and side-stepped Rudd to net.

Norwich applied late pressure as they attempted to take a share of the spoils – and they thought their endeavours had been rewarded when Bassong arrowed a shot beyond Mignolet from the edge of the box after a free-kick had fallen invitingly for him.

But, there was to be one final, dramatic twist as Lallana pounced in the 95th minute to spark scenes of incredible celebration inside Carrow Road from everyone connected with Liverpool.