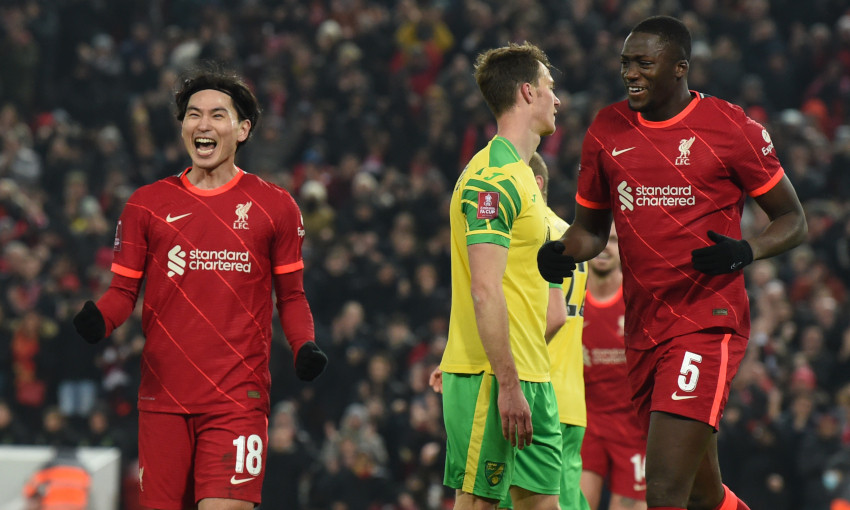 Three days after lifting the Carabao Cup at Wembley, the Reds maintained their pursuit in the FA Cup courtesy of the Japan international’s clinical first-half brace at Anfield, with Lukas Rupp’s 76th-minute response not enough for the Canaries.

Jürgen Klopp’s side will discover their next opponents in the competition when the draw for the last eight takes place on Thursday evening.

The manager made 10 changes to his starting line-up as only Jordan Henderson retained his place in the XI that started the Carabao Cup final at Wembley.

There was a brisk tempo to the early sparring and, nine minutes in, Curtis Jones was a whisker away from opening the scoring with a replica of his Merseyside derby goal in this competition in 2020.

He created space for a shot at the left edge of the Norwich area and sent a curler towards the opposite top corner that kissed the top of the crossbar as it just failed to dip sufficiently.

Teemu Pukki soon had a sight of goal, albeit from a difficult narrow angle, when a James Milner challenge knocked the ball into his path on the right-hand side, but he dragged the effort well wide of the far post.

Liverpool were making more of the running, however, and they turned their ascendancy into an advantage with 27 minutes on the clock.

Play was moved patiently from right to left for Kostas Tsimikas to deliver a cross into the area, where Divock Origi controlled and, with the Canaries perhaps expecting a shot, unselfishly set up Minamino for a touch and emphatic blast past Tim Krul.

And the Japan international produced a similar, but even more impressive, finish to double his and Liverpool’s tally six minutes before half-time.

Tsimikas was involved again, his corner kick from the left nudged along its path by a Norwich head and arriving to Minamino, who dispatched a rising strike into the top of the net.

The Reds introduced Harvey Elliott for Jones at the outset of the second half, but it was a Canaries substitute with the first threat after the restart.

Pukki’s arcing pass in behind invited Josh Sargent to bear down on goal, though his rolled attempt on the diagonal drifted wide, with Alisson Becker well placed in any case.

Alex Oxlade-Chamberlain clipped the outside of the post from the edge of the area and Henderson saw a sweeping strike headed away from goal, either side of a strong penalty claim.

It came after Diogo Jota had danced through several Norwich challenges into a position to blast at goal; the ball clattered the arm of Ben Gibson, with the referee uninterested in the hosts’ spot-kick appeals.

The Liverpool forward was next frustrated with himself. Minamino and Elliott combined on the right flank for the latter to stand up a superb cross to the far post, where Jota couldn’t get over the ball with his header and was off target.

And just as it appeared the contest might drift to full-time, the visitors halved their deficit. Sargent tucked a pass into Rupp’s run through the middle of the field and he moved forward before thumping a finish to the left of Alisson to give his side hope.

Alisson had to push over a firm swipe at goal by Jonathan Rowe, while Luis Diaz was inches away with a subsequent curler, but the Reds had done enough to reach the FA Cup quarters.