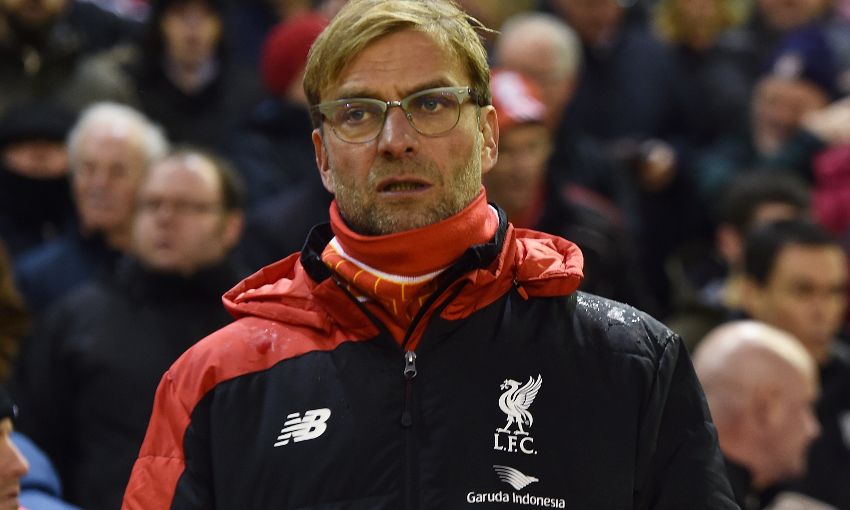 Jürgen Klopp sent a special thank-you to Liverpool fans after what he termed the 'best atmosphere' at Anfield since his arrival helped salvage a 2-2 draw against West Bromwich Albion on Sunday.

The Barclays Premier League clash started slowly on a bitterly cold afternoon on Merseyside but quickly developed into one of the most action-packed games of the season so far.

Jordan Henderson swept home at the end of a pleasing team move to put the Reds in front, though their lead was soon wiped out when Craig Dawson took advantage of a fumble from a corner to level.

The Baggies thought they had struck again before the break only for a delayed offside decision to cancel their celebrations – but their joy was restored when Jonas Olsson flicked in a near-post header on 73 minutes.

Klopp’s charges were relentless in their push for a response and it arrived in the sixth minute of eight added on, Divock Origi lashing a shot from long range that took a deflection and bounced into the bottom corner.

The boss roared his approval to whip up even more noise from the Anfield crowd and while a dramatic winner was not found in the final moments, he took a number of positives from what unfolded.

“It was such a hard game. On Thursday we played on ice, today against a wall. We played well, we created chances and we made everything.

“They got two set-plays. I don’t know what percentage of the goals we have conceded have been set-plays but it feels like 98 per cent or something.

“We defended well and everything was good. Creating chances is not easy against a team like this, especially when you played on Thursday. You play against an opponent and they play long balls all the time, they only want set-plays. So it was really, really hard.

“Maybe the crowd was disappointed but they didn’t let us feel it. That’s the thing. We were all in the game, we were all concentrated and we all wanted to get one point at the end. It felt like three. I know it is only one but if felt like three.

“This moment was an explosion and it was the best atmosphere since I’ve been here. I really enjoyed it. I don’t know if it’s normal in England but I want to say thank-you. Together with the team, it was great.

“Sometimes a point deserved in the right way is more important. I know you all want the three points, it’s important for the table. But for our development so many different things are important – the style of play against a team like this.

“Everybody tells us we can’t play against a team like this. Yes we can. We could do everything; we were in the box, had chances and made a brilliant goal. Everything… and then they got two set-plays.

“Then to stay in the game, only a few seconds from disappointment, and to come back is a big moment in football. I really enjoyed it. This one point is a big difference – nothing or one. I enjoyed this game and enjoyed the atmosphere with my whole body.”

The German was asked by one reporter for a further assessment of the goals conceded by his team and the role played in them by Simon Mignolet.

He responded: “I said to Simon at half-time: ‘If somebody says it was your fault, you can say it’s not true, it’s my fault’ – because I want a ‘keeper who helps, a ‘keeper who comes out and tries everything.

“In this there were 20 players around him. He tried and didn’t get the ball for the first goal. I don’t know who has responsibility for the disallowed goal but it was not a goal, it was offside.

“The next one I have to see again. It was at the near post, which is usually not the goalkeeper’s responsibility, we have people there who have to make a header and defend this.

“They had six or seven players 6ft4 and taller, so it’s really difficult for us to defend. We tried it, we didn’t do well, we have to do better and we will work on it.

“But there’s nothing negative to say about Simon. For the first goal he tried and that, for me, is important. I want the goalkeeper to come out because he can help. Sometimes you try something and make a fault – it’s not the biggest problem, you go on.”