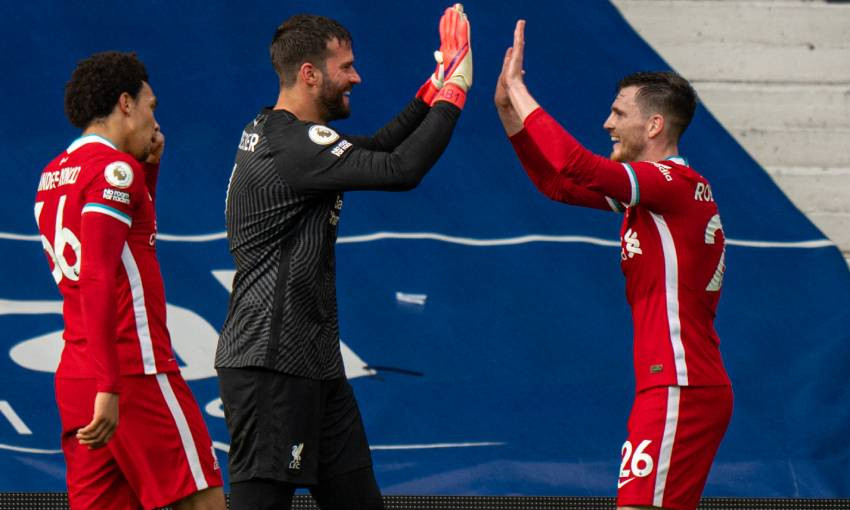 Andy Robertson was glad to be proven wrong when he saw Alisson Becker going up for a corner in the final seconds at West Bromwich Albion on Sunday.

The Liverpool left-back initially had reservations as his goalkeeper decided to join in with the last-gasp efforts to find a winner at The Hawthorns.

But Alisson, of course, brilliantly headed in Trent Alexander-Arnold's delivery to give his team a crucial 2-1 victory in their quest for Champions League qualification.

"I've given up now trying to describe it," Robertson told Liverpoolfc.com post-match. "This team, I've said it time and time again – of course it was maybe when we were going for titles and things like that – but we just don't know when to give up.

"We keep fighting, we keep going, we keep probing. We had some really good chances [in the] last 10 minutes and we just couldn't find the chance.

"Then you get a corner and I see Ali sprinting by me and I'm thinking, 'I'm not sure about this.' I go back to the halfway line and any striker in the world I think is happy with that header – it's unbelievable.

"For him, for his family, what he's been through, everyone's been through a rubbish time but him particularly. Not being able to go back to Brazil after losing his dad and everything like that, the amount of emotions that man has probably felt throughout this whole year, welcoming a baby boy into the family, it's incredible.

"We are one big family. When one of us hurts, we all hurt and we all felt the impact of when his father sadly passed away.

"It's an incredible, emotional moment for him and I'm sure there won't be a dry eye back in Brazil for him. Clearly his dad is looking over him."

Alisson's heroics completed a comeback from the Reds, who fell behind after 15 minutes following the opener from Hal Robson-Kanu.

Mohamed Salah equalised with his 31st goal of the season before the unforgettable winner in the 95th minute.

The result sees Jürgen Klopp's men move to within one point of fourth-placed Chelsea in the Premier League table as two fixtures remain.

On the team's character, Robertson said: "Look, we showed it a lot more in the last two seasons than we have this season.

"Sometimes we've been on the wrong end of losing late winners but it's always nice to be on the other end of it in the most incredible way possible.

"Usually I've got quite a lot of words for you and I can explain it, but just now I'm a bit blown away by it because I just didn't expect Ali to pop up with a winner.

"It's important now that our full focus is on Burnley."

Looking ahead to Wednesday night's trip to Turf Moor, the No.26 continued: "We'll let Ali maybe enjoy his moment just now [for] maybe five, 10 minutes and then we'll ask [for] a clean sheet from him on Wednesday because we're still in the hunt, we're still in it.

"But it's going to be incredibly difficult and we now go to Turf Moor where there'll be fans.

"We still need six points to be in the Champions League and then we can maybe sit back with a bit of satisfaction."