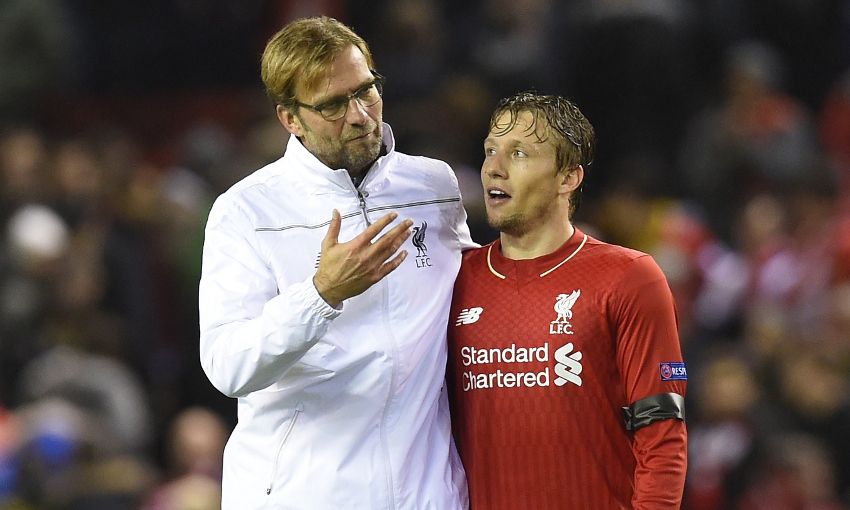 Jürgen Klopp admits he is hoping Liverpool do not miss Lucas Leiva too much during Sunday's clash with Swansea City, with the midfielder forced to sit the game out due to suspension.

A fifth yellow card of the league season picked up against Manchester City last weekend has ensured the Brazilian can play no part in the meeting with Garry Monk's side.

It will be the first time Lucas has missed out on a place in Klopp's starting XI in the Barclays Premier League since his appointment in October.

And the manager was full of praise for the 28-year-old's efforts under his watch.

“I hope he’s not a big miss! It’s good for both of us that I’m here - I like players like this, he likes playing like this," Klopp told reporters.

"He can be much more dominant in the game, that's what we are always talking about. But he has a really good personality and in a position like his position it’s very important that you have a good personality."

When asked if Lucas' role meant he could, on occasion, go unappreciated by observers, the boss replied: "I'm not sure he's unappreciated because it's one of the most important [positions], for sure.

"I heard here in England it's 'holding midfielder' - we should change this name because [that's] not all of his job.

"He has to organise, he has to read the game in every situation. I'm not sure how many passes he has to play in this position but it's a lot because usually we have to switch the game.

"It’s an important position in football, in the middle of the pitch it's the heart of the game. And we all know without a heart, nothing works."

Swansea have won just one of their last 10 outings in all competitions ahead of their trip to Anfield, but Klopp remains wary of taking their impressive forward line for granted.

The German also insisted his players must focus on avoiding the sluggish start that cost them dearly when they faced Crystal Palace at home prior to the international break.

“It’s of course not the most easy situation for Swansea. But a draw after 2-0 [down against Bournemouth in their last game] is for sure a good result," he added.

"I think at the beginning of the game they thought about another result, in their situation that's clear.

"This morning what we did first thing was we analysed Swansea’s last games.

"There's no easy games. We saw their strengths with [Andre] Ayew, [Jefferson] Montero and [Bafetimbi] Gomis and the other guys.

"We have to defend very well, that's for sure, and if we move more than enough, if we play football, then we can find spaces.

"If we can find spaces, we can be dangerous for them and we can make goals - that is the most important thing.

"We have to be in the game from the first second on, it's a big challenge as we saw against Crystal Palace.

"But if we take Crystal Palace as the last warning, then it was important for us.

"If everybody is prepared for a big fight, it will be a good game."

However, the former Borussia Dortmund coach is reluctant to pay too much attention to the standings this early on.

"It’s only important to be concentrated on your own situation and how you can make your own progress.

"That's what we think about and if it would help to think about the end of the season, I would do it, but I know it does nothing.

"It’s always important how far you are away from the position you dream of - it's better eight than 20 but two would be better than eight!

"We have to try to close this gap if it's possible and that is what we try."