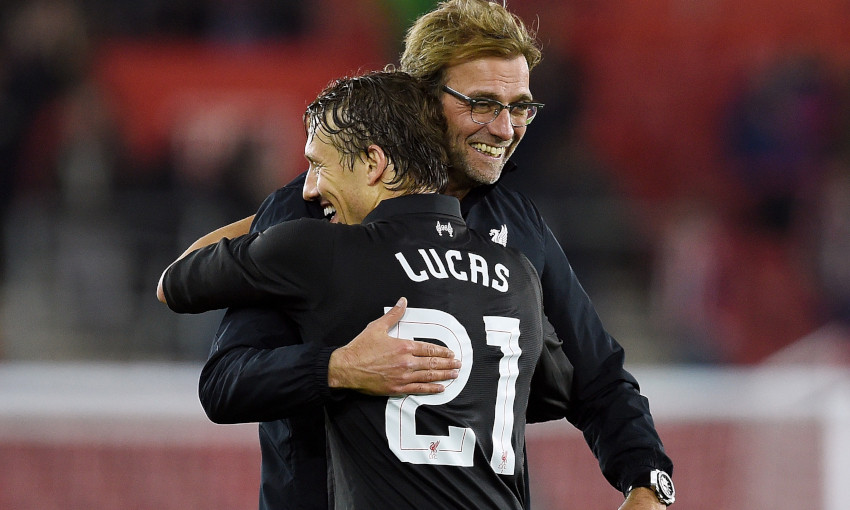 Lucas Leiva left Liverpool in 2017 convinced the club was on course for success under Jürgen Klopp.

Brazil midfielder Lucas had been with the Reds for more than eight years when – on October 8, 2015 – Klopp was officially announced as the new manager.

The pair subsequently worked together for almost two seasons as the boss initially guided the team to two major cup finals and then Champions League qualification.

Lucas set off on a fresh personal challenge with Lazio as Klopp’s revolution gathered pace, but he departed with absolute faith silverware would follow.

He has, of course, been proven correct with Liverpool lifting the Premier League, Champions League, FIFA Club World Cup and UEFA Super Cup in the previous two campaigns.

“When I left the club I was 100 per cent sure a great moment was coming. You could feel [it],” says Lucas on Thursday night’s episode of LFCTV’s Extra Time to mark the fifth anniversary of Klopp’s arrival.

“I could feel that things were changing. I was sure it would come but you never know when, because you’re playing against so many good teams. It’s not easy to predict.

“But I could feel that Liverpool were going to come back, winning important things. Of course, the Premier League was always the first target, let’s say, every season. I could feel that, yes.

“When he arrived, for me it was a new start. That’s how I felt. Slowly, I started to understand more the way he wanted us to play. Of course, I played in different positions.

“He was a great manager for me, I learned a lot. I played for him for two years, two seasons, but it was enough to learn a lot and also understand that the way he wanted to play, maybe for me was going to be more difficult.

“That’s why we have this great relationship until today – because he always treated me with so much respect and I tried to do the same.”

Klopp’s first season at Anfield ended with a heartbreaking near-miss as Liverpool were beaten by Sevilla in the Europa League final in Basel.

But that experience, and the lessons it gave the squad, were fundamental to the Reds’ resurgence in the years that followed, according to Lucas.

“The win against Man City, 4-1, is one of the games that I remember well. That game started to show a little bit how the team would play,” he said of the standout matches in 2015-16.

“Of course, there are so many others. The Dortmund game was incredible. Also the final of the Europa League – we lost but it was special.

“If you look back now, it was not great to lose but it helped, I think, to make the mentality better and go on for another title, which happened after two years in the Champions League. These two games I remember most.”

Watch the full interview with Lucas Leiva on Extra Time, 9pm BST on LFCTV this evening.