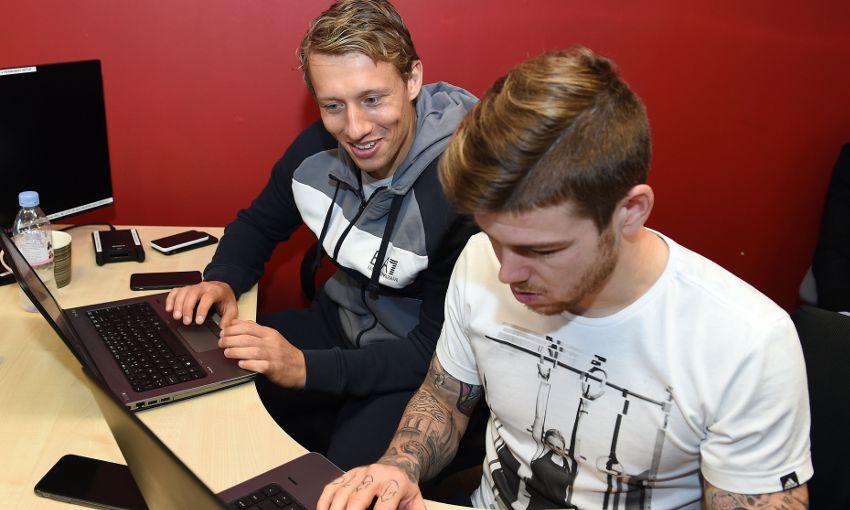 I know both Alberto and Lucas have played with some incredible players during their careers and so I wondered who they would pick if they had to choose a 5-a-side team from those they have shared a dressing room with.

As you might expect, Alberto packed his side with World Cup winners from Spain while Lucas mixed former colleagues with a sprinkling of samba magic from his home country.

Neither picked themselves, though!

Take a look at who they did choose – and why – below, and cast a vote on which team you think would beat the other by visiting the @LFC Twitter page now.

Sergio Ramos – He is a leader and a captain that everyone respects and would like to have.

Xavi Hernandez – He can see everything around him, he has eyes in the back of his head.

Philippe Coutinho – He is a different player, a very technical player and he is a magician.

Steven Gerrard – A legend and a great captain, an incredible player and person that can do everything on the pitch. Everyone would like to play with him.

Xabi Alonso – He is probably the best passer that I have ever played with. He is someone I really learnt from and I really enjoyed playing with him. He controlled the tempo of games.

Steven Gerrard – I’m picking Stevie for all the same reasons as Xabi. He has a similar passing quality, but plus the attacking-mindedness and gets forward. They’re a very good partnership.

Ronaldinho – I’m playing a 2-1-2 formation, so Ronaldinho is my No.10. There are a few others I could have picked, including Philippe, but I’ve picked Ronaldinho because he was twice voted the best player in the world. He’s magic. He was incredible at Barcelona and with the national team.

Luis Suarez – He is incredible. He scores goals, he fights and doesn’t give defenders a second on the ball.

Neymar – My final pick is Luis’ partner now, Neymar. He is in fantastic shape and I am sure he will probably be the best player in the world soon.

I think it’s a good team. I am very lucky to have played with a lot of top-class players – the likes of Torres, Philippe, Mascherano…  and with the national team in Thiago Silva, Gilberto Silva, Kaka, Adriano. With this shape for a five-a-side team, I think I have everything I need to beat Alberto’s team!