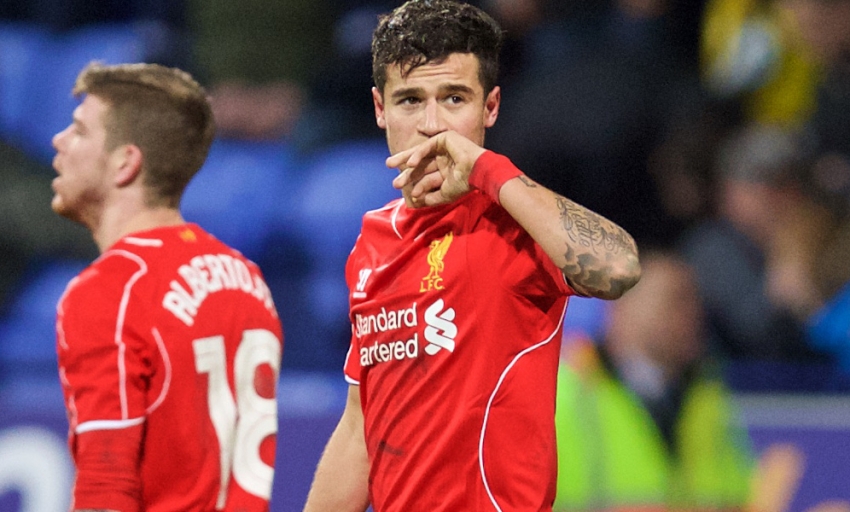 Lambert: Why I chose to stay at Liverpool

Philippe Coutinho is predicting a tie to savour when Liverpool tackle Besiktas in the last 32 of the Europa League this week, though he has stressed the importance of maintaining the momentum built up over the past two months.

The Reds welcome the Turkish side to Anfield on Thursday for the first leg of the knockout-phase double-header before the return meeting at the Ataturk Stadium in another seven days' time.

Brendan Rodgers' side are currently on a run of just one defeat in 16 matches since mid-December, and with a top-four berth and the FA Cup also still to play for this campaign, Coutinho admits it's crucial Liverpool retain the impetus they've acquired recently.

He told Liverpoolfc.com: "It's important to maintain the momentum. The team has been doing what the coach has been requesting and everybody is trying their best on the field.

"Everybody defends when we do not have the ball and I think that has been important in helping to allow the team to play well, so we have to continue like this.

"We know at the beginning of the season it was not like this with our form, but we have to continue as we have been and aspire to achieve good things like trophies.

"We have good chances [in the competitions]. The team has been playing well, a few good players have returned from injury and the team is united.

"It will be a great game against Besiktas and everybody is looking forward to it. The Europa League is a big competition and I know they are a good team, so they'll be two great matches.

"But we have to keep on doing the work we have been doing until now and continue to be consistent. We have been playing well and we will have to do everything we can to go through to the next round."

Should Liverpool go all the way in the Europa League, it will provide them with an instant return to the Champions League in 2015-16 - an alternative route into the competition to the traditional top-four domestic entrance.

"I think the most important thing is the cup - we have to think about the cup," said Coutinho. "Of course, there are other benefits of winning the title, like the qualification for the Champions League.

"But we also have the chance to finish in the Premier League top four, and the most important thing is to always be fighting for trophies.

"The Europa League is an important cup and Liverpool are a big club that have won many trophies.

"We as players are aware that we will have to do everything to win more trophies for Liverpool because they are important - they stand out. We are all looking forward to the challenges and we will do our best to win a trophy."

Domestically, Liverpool discovered on Monday evening that Blackburn Rovers stand between them and a place in the semi-finals of the FA Cup, with an Anfield tie due to be played next month.

Though the Reds have automatically been declared as favourites to progress against their Championship opponents, Coutinho doesn't necessarily see it that way.

He said: "In the cup, all games are tough. It will be a difficult game for sure, like all the others.

"We have a good chance, we have been playing well and everyone is making an effort. That's what we want because our objective is to win trophies. That is what everyone wants at the club."