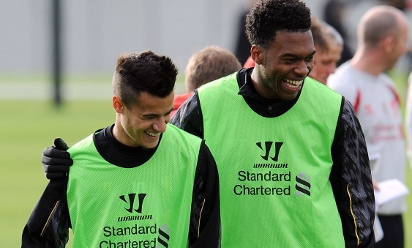 Philippe Coutinho admits the task of supplying the ammunition for the Barclays Premier League's deadliest strike force is one he's savouring – though he's not too sure why he's earned the nickname 'David Blaine'.

The Brazilian has been likened to the American magician by Daniel Sturridge due to his ability to conjure up opportunities for his teammates on the pitch.

So what does he think of his new moniker?

"To tell the truth, I hadn't heard about that!" he laughed when in conversation with Liverpoolfc.com.

"If I'm not mistaken he's a magician? David Blaine?

"I don't know, I guess it's cool for him to say that, but to tell the truth I hadn't heard about it."

Coutinho and Sturridge have struck up a close friendship since both arriving at Anfield in January.

The 21-year-old believes such bonds bode well for Liverpool on the pitch.

"He's an excellent person," smiled Coutinho. "He's always playing around with me and the other players, and he's fun to be around and a great player.

"Everybody on the team gets along very well when they're off the field and I think that creates a greater union between us and makes us stronger on the field."

Coutinho made his first start since September as Liverpool ran out 4-0 winners over Fulham at Anfield on Saturday.

Luis Suarez and Sturridge excelled in tandem once more as the former helped himself to two strikes, and the duo both now sit at the top of the league's goalscoring charts with eight, along with Manchester City's Sergio Aguero.

"It's incredible," said Coutinho. "As I've said before they're great players.

"They're always on the move and scoring goals and I'm very happy to play with them.

"They make our work moving forward easier because they're always looking for space, and it's easier to pass them the ball.

"But it's not just them in the team, there are other great players and I'm very happy to be part of the group. It's an excellent team."