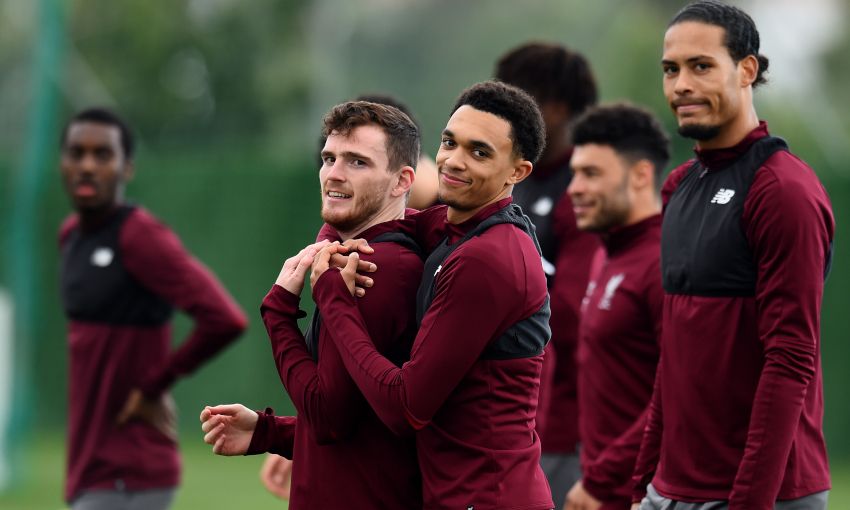 Back and forth like pistons, tracking and tackling, delivering crosses and corners game after game, Trent Alexander-Arnold and Andy Robertson are redefining the art of full-back play.

The pair’s technical qualities are frequently commented on, and rightly so because they are amongst the leading full-backs in world football now. Alexander-Arnold’s quick-thinking corner for Divock Origi to score the winner against Barcelona has been widely acclaimed. Robertson’s assists from the left, including one magnificent cross that picked up Roberto Firmino’s run between Spurs centre-backs on March 31, have similarly earned extensive praise.

Different pathways led them to this stellar level. Still only 20, Alexander-Arnold rose through the more traditional hot-house academy route, captaining Liverpool U16s and U18s, his talent acknowledged by his country with England age-group caps. The 25-year-old Robertson’s journey has been less swift and smooth via rejection at Celtic, playing for Queen’s Park in the fourth tier of Scottish football in front of hundreds, before accelerating his development at Dundee United and Hull City, and then proving an inspired, ludicrously cheap signing by Liverpool.

As well as ability, what the pair share is a formidable work ethic. All aspiring players watching Alexander-Arnold and Robertson in Madrid will see the total determination underpinning their rise, an unquenchable desire to achieve more and more. The best never rest. They keep chasing more.

It is the intensity, the pressing, racing back and defending, constantly meeting the demands of a prodigiously demanding job with the wide players, Mo Salah and Sadio Mane, frequently moving inside, that set Liverpool’s full-backs apart. They are a mix of silk, steel and stamina.

Much of Liverpool’s width, the sustained stretching of opposing defences, is provided by Alexander-Arnold and Robertson. In terms of testing a body’s physical limits, and a mind’s concentration levels, there are few more testing roles, yet Liverpool’s full-backs thrive on the challenge.

These are selfless individuals, utterly devoid of ego, giving everything for the team, a reality reflected in their behaviour off the field. Alexander-Arnold’s commitment to the local community is well-known through his work with An Hour For Others. He raises funds through signing shirts that then get auctioned for charity. He raises spirits of the disadvantaged simply by talking to them, listening to their problems, offering words of encouragement. He’s genuine. He gave up part of his Christmas to head in to the wonderful TIA Hotel near Anfield to help host a lunch for those who would have been without company, even a meal, on Christmas Day.

Robertson has long been helping foodbanks, and requested guests at his 21st birthday at Parklands Country Club, near Glasgow, to make donations which were sent to the Thornliebank foodbank in his native Glasgow. They raised £500. Since moving to Liverpool, Robertson has got involved in the foodbank stationed on Anfield Road on matchday, visiting their HQ and carrying crates into distribution points at local churches.

When he chatted to organisers, Robertson’s genuine concern could be heard in his questions to them, mainly revolving around whether the problem was getting worse. It is. Which means Robertson’s assistance, along with all members of Jürgen Klopp’s team, and chief executive Peter Moore, is even more important. Some initiatives change lives; foodbanks save them.

Alexander-Arnold and Robertson don’t just represent Liverpool brilliantly well on the field, but off it too. Good players, good people too.