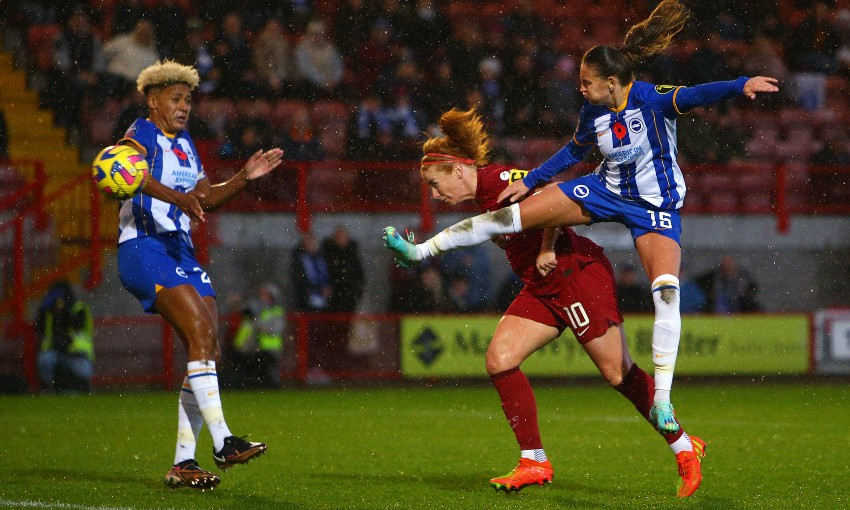 Missy Bo Kearns put the Reds ahead in Sunday’s Barclays Women’s Super League contest at Broadfield Stadium, but Brighton responded strongly and led 3-1 at the break.

Half-time substitute Shanice van de Sanden pulled one back for Matt Beard’s side and, as the clock ticked past 90 minutes, Taylor Hinds hit the crossbar from distance before Van de Sanden turned provider for Furness.

The Dutch forward surged down the right and sent in an excellent cross, which a stooping Furness planted home firmly to snatch an important point for the visitors.

Having absorbed an early spell of Brighton pressure, it was Liverpool who went in front thanks to Kearns.

Melissa Lawley’s direct, incisive run down the left took her to the byline and Kearns had broken forward from midfield to convert the No.11’s delivery with a first-time finish.

That advantage was quickly overturned, though, with the hosts striking twice in the space of four minutes.

And, soon after the half-hour mark, Brighton got a third as Robinson’s attempted ball in from the right drifted over Cumings and into the net.

Van de Sanden’s introduction at the break provided some additional attacking impetus and the Netherlands international’s first goal since her summer return to the club was just reward for the Reds’ best period of the match.

Former Brighton defender Emma Koivisto had just forced Megan Walsh into an excellent, full-stretch stop and, a couple of minutes later, she hooked in a cross that Van de Sanden nodded in at the back post.

Liverpool had a quarter of an hour plus stoppage time to find an equaliser and there was to be late, late drama, as first Hinds went agonisingly close before Furness snapped a five-game losing streak in the WSL in the 92nd minute.