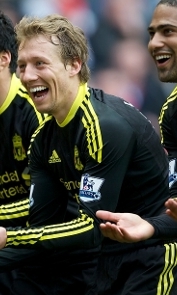 When it comes to picking an all-time five-a-side team, how would your selection compare to Pepe Reina's or Lucas Leiva's, for example?

LFC Weekly recently asked several members of the Liverpool first-team squad to pick their dream teams for the small court, consisting of players they've played alongside during their careers so far.

It's a question many of them didn't find as easy as it may sound. Here's how they chose...

"That is difficult! My goalkeeper would be Pepe Reina. My defender would be Jose Bosingwa. The midfielders would be Lucho Gonzalez and Stevie Gerrard - and in attack Lisandro Lopez.

"Wow, a difficult one. I'll say Casillas in goal. I'll say one defender Carlos Puyol. Then Xavi from Barca, probably Stevie then David Villa as the striker. That's not a bad team, eh?"

"There are a lot to choose from, such as Branislav Ivanovic at Chelsea and Aleksandar Kolarov at Man City. But if I was picking a team I would go for Steven Gerrard, Fernando Torres, Nemanja Vidic and Milos Krasic who is at Juventus. Goalkeeper is easy, Pepe Reina.

I'd like to qualify this by not including any Liverpool players as I don't think that would be fair. Okay, I'll select big Pete (Cech) in goal, JT (John Terry) at the back, in midfield I'd have Michael Carrick and Frank Lampard and Paolo Di Canio up front. That team should be alright!

Jamie Carragher (selecting players he watched as a youngster)

"It would have to be a Liverpool-Everton line-up because they were the best teams. So Neville Southall in goal. Kevin Ratcliffe for his pace at the back to stop us getting counter-attacked. Graeme Souness in midfield. Kevin Sheedy as a left-footer. And it would have to be Kenny up front wouldn't it?"

"Pepe in goal. Elmander from Bolton. I had two years with him at Brondby. Then Bendtner because he's my friend. Simon Kjaer, my partner at the back for Denmark. And Stevie of course."

"Without picking friends, I would have to pick Gianluigi Buffon in goal, who I was with at Juventus. Then Dani Alves for his energy. I'd pick myself and Steven Gerrard in midfield and Ebbe Sand as a striker because he works very hard for the team."

"Oh dear, that's a tough one. There's so many I will have to leave out. I'll say Ronaldinho, Stevie, Fernando Torres, Kaka and myself. I would have to be in the team and I would be the captain! But I think I'd need to do a lot of defensive running to allow the other four to attack. I think that would be a pretty good five-a-side team."

"Gerrard, Torres, Steve Davis from Rangers and I've got to pick myself. In goal it would probably be Pepe. It's close between Pepe and Allan McGregor because Allan McGregor is a good goalkeeper but I think Pepe edges it."