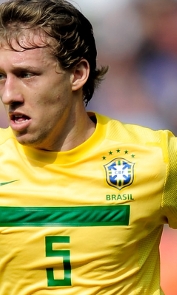 Lucas Leiva today looked ahead to the forthcoming Copa America tournament and revealed his ambitions of helping Brazil to make history.

The Liverpool midfielder has been included in his country's squad for the competition, which gets underway in Argentina on July 1.

Having lifted the crown in 2004 and 2007, Brazil are aiming for an unprecedented third Copa America in a row - and Lucas is ready for the challenge.

"It's my first official competition with Brazil and I can't wait for it," he said. "It means a lot - to play for Brazil is the highest target you can have.

"I know how difficult it is to get into this squad when you are competing against so many good players. It's reward for what I've done for Liverpool and now I want to help Brazil do well.

"When you are playing in the country of your biggest rivals that makes it more difficult. I'm sure we will have more fans against us than for us.

"We know the people in Brazil love football so much and the expectation level is always really high. There will be a lot of pressure but I'm used to that from playing for Liverpool.

"It's our first competition under the new manager. We have a very young team and are building for 2014. That's the big target but when you go into any tournament like this you have to go into it focused purely on winning it.

"Brazil must always be one of the favourites to win and I want to help make history."

It's an exciting new era for the Brazilians under coach Mano Menezes - a manager Lucas worked with at former club Gremio prior to moving to Anfield.

Menezes has handed Lucas the No.5 jersey during his spell at the helm, a shirt once donned by the likes of Dunga and Mauro Silva.

"A lot of big players have worn that shirt," said Lucas. "It is really important. In Brazil they think everything starts with the No 5.

"For me it's just a pleasure to wear that shirt and have the opportunity to play for Brazil.

"The manager has known me since I was 18. He knows me well but there are no favours.

"Everyone in the squad deserves to be there because of the form they have produced for their clubs.

"I try to prove myself in every game and show that I'm capable of being in the national team. It will be great if I can achieve good things with Brazil."

Menezes has been keen to blood exciting young talent since taking over the reins from Dunga last summer.

One such player is 19-year-old livewire forward Neymar, who has allegedly attracted interest from a series of Europe's top clubs.

"He's a fantastic player and one of the biggest talents we have at the moment in Brazil," Lucas reflected.

"Neymar's been doing really well in Brazil and I'm really looking forward to watching him over the next few years.

"In time I know he will come to Europe and play for a big team."

Brazil kick-off their quest for the Copa America in Group B against Venezuela on July 3. They'll then take on Paraguay (July 9) and Ecuador (July 13).

Should they successfully navigate a passage out of the group stage, the Canarinhos could ultimately face Luis Suarez's Uruguay in the latter stages, or hosts Argentina and Lionel Messi in the Buenos Aires final on July 24.

Lucas, therefore, is well aware of the task awaiting Brazil.

He said: "Messi is the greatest player I've ever come up against.

"I played against him in the semis of the Olympics in China in 2008 and then when we played Argentina in a friendly last year he scored in the last minute. We know he's in a very good moment and it's hard to stop him.

"Argentina have the best player in the world and they are always really strong but Uruguay will also be tough. They did very well in the World Cup and have very good players like Luis.

"Luis and I have been talking about maybe facing each other in the quarter-final or semi-final. That would be a great occasion but hopefully Brazil will do better.

"If Brazil play against Argentina in the final then the world will stop to watch. The rivalry is massive.

"It will be a very good competition to watch and to play in. I can't wait for it to start."