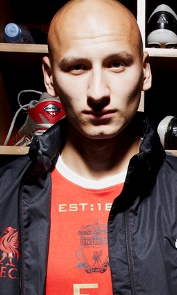 Jonjo Shelvey has likened playing in front of the Anfield crowd to 'taking a load of Pro Plus'.

The 19-year-old spoke in awed terms about how he feels when the Kop sings You'll Never Walk Alone during an interview with FourFourTwo.

"The atmosphere is unreal. I mean European nights are something special," said Shelvey.

"When they're singing You'll Never Walk Alone it makes the hair stand up on the back of your neck - not that I've got much hair. It's just something I can't describe.

"You feel like you've taken a load of Pro Plus, it's a joke. It is something you dream about as a little kid in the playground with your mates. To actually do it is just a dream come true."

Shelvey has made 14 appearances this season after signing from Charlton last summer.

And he has high hopes for next term.

"Parts of my game have improved since I left Charlton, that was obviously going to happen and I've bulked up from being in the gym," he said. "When I come back for pre-season I want to cement a first-team place.

"I want to be seen as an important first-team player. I think I can do that, the club thinks I can do that otherwise they wouldn't have bought me. If given the chances, I will."