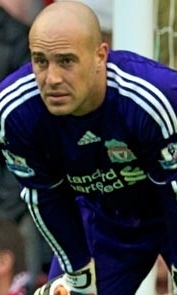 Liverpool's hopes of Europa League qualification have been dealt a blow after Tottenham Hotspur claimed a 2-0 win at Anfield on Sunday afternoon.

Rafael van der Vaart put Spurs into the lead inside 10 minutes, seeing his volley take a slight deflection and sail into the top corner to cap an impressive opening by the visitors.

Luka Modric made it 2-0 from the penalty spot early in the second half after John Flanagan was harshly adjudged to have fouled Steven Pienaar with a shoulder barge just inside the box - though TV replays proved initial contact occurred outside of the area.

The result means the Reds must now better Tottenham's result against Birmingham at White Hart Lane next Sunday when they travel to Aston Villa if they're to finish fifth in the Barclays Premier League and qualify for Europe. 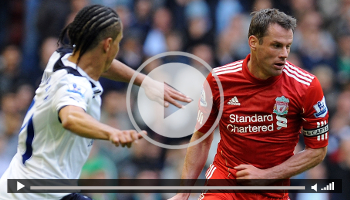 Despite a heavy pre-match downpour, a carnival atmosphere greeted kick-off inside Anfield following Thursday's news Kenny Dalglish had signed a three-year contract to remain as the club's manager on a permanent basis.

The legendary Scot has helped mastermind a complete turnaround of Liverpool's fortunes since returning to the helm in January and headed into the contest knowing victory over the Londoners would assure his side of a fifth-place finish in the Barclays Premier League and entry into the Europa League next season.

Dalglish made just one change to the side that had dismantled Fulham on Monday with Andy Carroll replacing the injured Raul Meireles.

However, it was the visitors who made the more promising start as they looked to revive their own hopes of securing a Europa berth.

And their early pressure told when Van der Vaart fired them into a ninth-minute lead. Collecting a half-cleared Spurs corner on the edge of the box, the Dutchman controlled on his chest before dispatching a sublime volley beyond Pepe Reina via the aid of a nick off Glen Johnson.

Liverpool were struggling to get out of first gear and it took until the 23rd minute for them to conjure up an attack of note, but Carroll mis-kicked on the edge of the box when attempting to connect with Maxi's lay off.

Soon after, only a spectacular diving header from Michael Dawson deep inside his own box prevented a Reds chance from Dirk Kuyt's dangerous centre.

The hosts were finally starting to threaten and the half-hour mark brought appeals for a penalty after Daniel Rose hauled down Kuyt inside the box, but referee Howard Webb instantly dismissed the claims.

Click on the play button to watch Kenny's post-match verdict 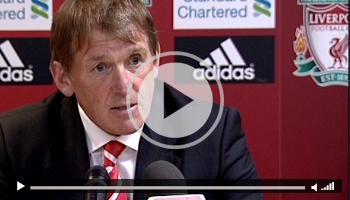 Five minutes later, Liverpool fashioned their best move of the afternoon so far resulting in Maxi squaring inside the box for Spearing, whose stabbed effort rolled well wide of the upright.

Carroll then went somewhat closer, heading over Skrtel's hooked cross from the byline when well positioned at the back post prior to Peter Crouch nodding a corner wide at the other end.

In first-half stoppage time, Luis Suarez's free-kick had Carlo Cudicini beaten but arched narrowly wide of the post to ensure Tottenham went into the break maintaining their advantage.

The half-time break did little to dampen the keenly-fought nature of the contest and Van der Vaart again tried his luck with a chip from the edge of the box that failed to test Reina.

10 minutes after the re-start, Tottenham were presented with a golden chance to double their lead when they were awarded a dubious penalty.

Flanagan's shoulder challenge on Pienaar sent both players falling to the ground, and TV replays proved initial contact had taken place outside the box. Nonetheless, Webb pointed to the spot and Modric drilled beyond Reina.

Liverpool re-grouped and Flanagan's low cross was steered over the crossbar by Suarez on the turn before Jay Spearing made way for Jonjo Shelvey - and the substitute almost made an immediate impact, striking millimetres off target from distance.

With 15 minutes remaining, Dawson almost diverted a corner into his own goal from inside the six-yard box but the ball bounced onto the roof of the net.

Liverpool forced a succession of set pieces as the game edged towards it's conclusion, but Cudicini remained largely untested - a late Carroll thump aside - and Spurs were able to hold out to claim their first league win at Anfield since 1993 and ensure the race of Europe will continue until the final day of the season. 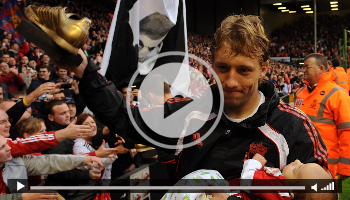