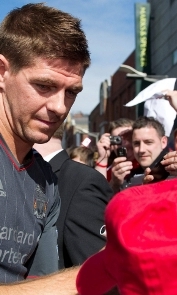 Thousands of Dubliners make the pilgrimage to Anfield every season - and this week those fans were rewarded for their loyal support as Anfield was brought to them.

Luis Suarez, Steven Gerrard and Dirk Kuyt boarded a private jet to the Irish capital for the launch of our new 2011-12 away kit - and we were with the boys every step of the way.

What greeted them was pandemonium: trailed by paparazzi, escorted by police and welcomed by hundreds of screaming fans who'd queued since 7am for a glimpse of their heroes.

Dozens of competition winners also got the chance to chat to the players and get their new kits signed - including the lucky finder a Golden Ticket which was hidden at a secret location in Dublin earlier in the day.

Click here to watch our video of the day>> 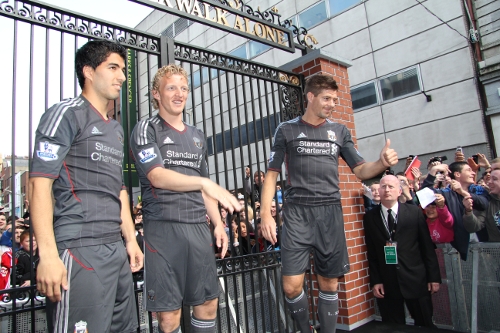 The event was dubbed Home Away From Home by adidas, who recreated the Shankly Gates and This is Anfield sign at the Dublin branch of Lifestyle Sports.

Our kit makers could have taken their pick of cities around the world but the club has always had an affinity with its Irish support.

The players, all of whom wear adidas boots, were more than happy to oblige, boarding a nine-seater jet after training on Thursday.

Conversation centred on the breaking news that Kenny Dalglish had signed a three-year deal - which ensured the trio were buzzing.

Video: Kuyt on the King's new deal and meeting fans>> 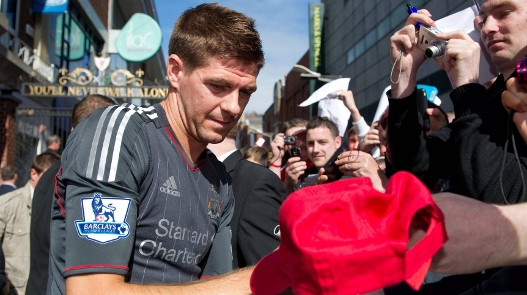 How else do footballers pass the time at 6000ft? They talk about football, obviously: which teams are after which players this summer, for instance, or whether Stevie will be fit in time to face Dirk and Holland in an international friendly scheduled for August. There answer is yes, by the way.

Gerrard played the joker, complaining that Dirk's new contract meant there was no money left for Liverpool to sign anyone in the close season.

After a turbulent descent past the Dublin Arena (a cue for much head shaking from Gerrard and co, with it being the venue for this year's Europa League final) and into Weston Airport, the players were sped to the city centre and the waiting mob.

"This is something a bit different," Gerrard told us. "adidas are my sponsor and I wear their boots but it's fantastic to come to a place like Dublin. Liverpool Football Club have got unbelievable support out here and we'll be mixing with the supporters, which is always nice. 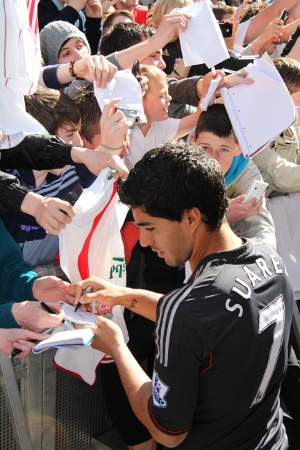 "It'll be interesting to see Luis Suarez's reaction because it's the first time he'll have left Liverpool and seen the support we've got. It's an eye opener."

Suarez's response was one of awe as the crowd chorused his song. It took Gerrard a good minute to quieten everyone down in order to address them with a few words on the microphone before all three players held up a freshly-printed DALGLISH away shirt. The hoards went berserk once again.

Video: Gerrard on Kenny and Dublin>> 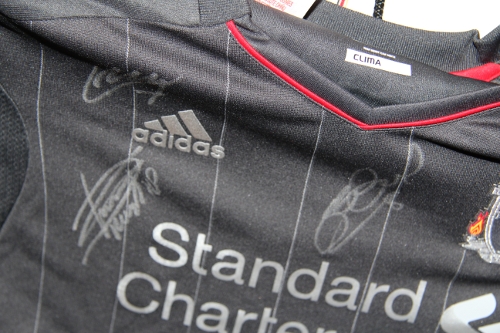 Afterwards Kuyt reflected: "I've been here a couple of times and it's nice for the fans who come from Dublin to Liverpool every week to see us here promoting the new away kit.

"It's always important to have a connection with the fans. We have a lot of fans in Liverpool but also around the world - especially Dublin. There is a connection between the two cities.

"We've seen ourselves today that we have a lot of fans here."