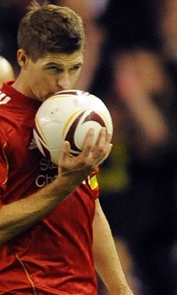 Dirk Kuyt believes Steven Gerrard will reclaim his standing as Liverpool's penalty king when he returns from injury next season.

The Dutch star has assumed the role in the absence of the skipper and once again showed nerves of steel when he netted with the last kick of the match at Arsenal recently.

It means the No.18 has now scored with all eight of his spot kicks since joining the Reds - but he insists that Gerrard's record in high pressure situations will keep him first in the pecking order.

Kuyt told Liverpoolfc.tv: "I think Stevie is a great penalty taker as well. Since I arrived here I have only seen him miss one and he has taken lots. He has scored a lot at very important moments. A special one I remember well was in the Champions League against Arsenal.

"The most important thing for the team is that we score our penalties."