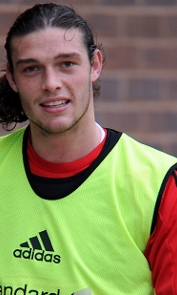 'I'm not surprised about Jay'

Kenny Dalglish has confirmed he will check on the fitness of Andy Carroll and Jamie Carragher at Melwood before deciding whether the pair are fit to face Birmingham City on Saturday.

The duo picked up knocks during Sunday's 1-1 draw with Arsenal, with Carroll jarring his knee and Carragher left unconscious following an accidental collision with John Flanagan.

Dalglish told a pre-match press conference at Melwood: "We'll have to wait and see on Carra and Andy before the weekend, but it's only Thursday morning before we've even trained, so we've not got anything conclusive about either."

The boss also dismissed suggestions Daniel Agger had recently undergone an operation on the knee injury that has ruled him out of action for the rest of 2010-11.

Carroll and Carragher will hope to be in contention as Liverpool look to maintain their push for European qualification when Birmingham visit Anfield this weekend.

However, Alex McLeish's League Cup winners will journey to L4 buoyed by a recen run which has eased the threat of relegation, despite a 3-1 defeat at Chelsea on Wednesday.

"It was a fantastic success in the Carling Cup, which maybe affected them a little bit in the league, but I think they'll be safe," said Dalglish.

"Alex will be looking for a few more points to guarantee their safety, but there are going to be an awful lot of points dropped or won at the bottom and I think they'll be good enough to get through it.

"If they've won the Carling Cup and survive in the Premier League, they'll have had a fantastic season."

Liverpool's injury problems have meant the likes of Academy starlets Flanagan and Jack Robinson have been given senior action in recent weeks.

The pair were the subject of several questions put to Dalglish by reporters at Melwood - but the manager once again remained eager to stress the importance of protecting the club's youngsters.

He said: "We're delighted with what they've done and the fact it's been against Man City and Arsenal speaks volumes for them and the way they've been brought up.

"We've got to be conscious of the fact they are only kids and we've got to know, and look for, any wee signs maybe it's a proper time to give them a rest if they need it. We've got to look after them and be consistent.

"But they are very level headed and the boys that come through the Academy do so with the same principals that are relevant to being a decent footballer - and that's that the team comes first."

With Liverpool U18s moving to the top of their league courtesy of a 2-0 success over West Bromwich Albion on Wednesday, Dalglish was asked whether the Academy was as strong as it's ever been.

He replied: "I don't know if it's as strong as it's ever been, but we're certainly delighted with the progress that's been made over the last 18 months.

"The fact they're top of their group isn't as important to us as it is having Jack Robbo and Flanno come in and do brilliantly for us. The progression of the players is more important than results.

"We're more interested in development than results and trophies for the kids, but if they can get both then that's great for them and us."

Dalglish continued: "It's important we have a successful academy. The success of the Academy is judged by the players who come through, not by the trophies they win or the results they get.

"For us it's really important as a football club to have a strong academy. We're starting to develop that.

"By choice you wouldn't have put the lads who've come in against Man City and Arsenal but then you want to put them in when we're doing well, so we've got one bit of it right.

"It's to their credit that they came in, competed fantastically well and never looked out of place.

"It's important we pick and choose when's right and wrong for them to come in but at this moment in time we haven't been afforded the comfort of doing that.

"Now they've got another problem: how they respond to the credit and the inches they're getting in the newspapers. But I don't think it'll faze them."

A willingness to hand senior action to youngsters has been a key feature of Dalglish's second reign at Anfield - and Flanagan and Robinson aren't the only Academy graduates to have figured recently, with Jay Spearing and Martin Kelly, prior to his hamstring injury, enjoying an extended spell in the first team.

"I don't think there has ever been a problem if they're good enough," said the gaffer. "Wee Jay is in the team and has been given a chance. Martin Kelly was given a chance before him.

Dalglish believes the fact Spearing, Kelly, Flanagan and Robinson are all Merseyside boys is cause for extra delight amongst supporters.

"It is an added bonus to supporters if they're local lads because they'll (the fans) know their auntie, their uncle, their cousin and will have gone to school with them," he said.

"It's great and is what football clubs should all be about - people being able to relate to them (the players).

"Sometimes first-team players aren't allowed to be normal, and that's not their fault. Sometimes that's the community's fault they're not allowed to be natural and normal and do the things that you or I can.

"But for us, it's important they are good people and good footballers."

The club's youngsters have all given assured performances in the first-team, and Dalglish believes that is testament to the tutoring they have received at the Academy.

He said: "It's all to do with the education they're getting at the Academy. They've been taught well and the lads themselves are strong characters, which has helped.

"It's of paramount importance they're taught properly. Both in footballing terms, but also life. If they come here and don't make it as a footballer, we'd like to think they'll go away as a better person.

"It's the same philosophy as when I was a youngster and started off at Celtic. I think it worked quite well for them and has throughout my life and time in football, so I don't see any need to change it.

"If we have the same philosophy at the Academy, I don't think we'll go too far wrong."

Elsewhere, Dalglish was asked about the impact first-team coach Steve Clarke has made since being drafted in to the club's backroom team in January.

"We've both came in at the same time, although obviously Steve missed the Manchester United (FA Cup) game as he came in on the Monday morning after that," he responded.

"He's been really influential in what's gone on. It's not a one-man band - everybody chips in and Steve's made a huge contribution to the results and what has happened since coming in."

Meanwhile, one journalist asked Dalglish for his thoughts on the recently-formed LFC Supporters Committee.

"The fans have a huge part to play in this football club - they always have done and always will do," he said.

"During my times here, it's never been separate - it's always been one item for everybody.

"The same principals apply, whether you're supporting, playing or working here, it doesn't matter - you support Liverpool Football Club and everybody can help each other."