HILLSBOROUGH: Dead - because they didn't count

In an exclusive chat with Liverpoolfc.tv, Danish icon Michael Laudrup talks all things LFC, from the limitless potential of Daniel Agger through to his thoughts on where Fernando Torres and Steven Gerrard rank amongst the best footballers on the planet.

The Barcelona and Real Madrid legend is regarded as one of the finest playmakers of his generation and could well have found himself amongst the top five players to have shook the Kop - had things turned out differently.

Here he explains why Agger is the key to Denmark's World Cup hopes, which Liverpool player he idolised as a youngster and whether the Reds can end the season on a high and secure that top four finish.

First of all, Michael, thank you for taking the time to talk to Liverpoolfc.tv.

No problem, it's a pleasure.

I suppose the best place to start would be with Daniel Agger, a player you know well...

Well I coached him at Brondby when I was manager a few years ago. He came directly from the youth team and you could see right from the beginning that he had great potential. He is very calm, very good with the ball and direct in the way he defends. We knew he would not be in the Danish league for too long, such was his undoubted quality. With that in mind, I wasn't surprised when he went to Liverpool and I think he did very well at first. I remember he scored the winner in the Champions League semi-final with Chelsea back in 2007. In the last year and a half he has been really unlucky with injuries and I think that is the only reason why he has not made an even greater impact in England.

You won the title with Brondby back in 2004-05. How big was Daniel's contribution?

Well, it was massive. Even though he was only very young, he played with great maturity. There was no doubt he had a big influence on our side. What surprised us was that he would tell his teammates where to go and help them through games. That was quite special at such a young age.

Just how good do you think he can become? Is he one of the best defenders in the world already?

If he can stay fit then I think he can definitely be one of the best central defenders in the game.

He's obviously a key player for Denmark. How important is it that he plays for your country in South Africa this summer?

He's hugely important, there's no question about that. He will be a key man that's for sure. The main players are people like Thomas Sorensen, Agger and Christian Poulsen. If they are fit then Denmark will have a good chance of progressing to the latter stages.

When Agger first arrived at Anfield, many supporters were quick to make comparisons with Alan Hansen. Do you think he has similar qualities?

I don't think it's worth me making comparisons. You are probably better placed than me to talk about that. What I do know is that Liverpool have had many great defenders in the past. Daniel is a very good player and if he can put his injury problems behind him and play at a high level in the next few years, then maybe you will be talking about him in the same breath. At the moment you are blessed with some very good central defenders. I think Carragher and Skrtel are very strong, so you have three very competitive players fighting for the two places.

Agger is closing in on his 100th appearance for Liverpool. It's a special landmark, but one that he maybe feels he could have reached sooner. Would you agree?

Yes, I think to play 100 times for a top club like Liverpool is something to be proud of. But I do agree, he will be frustrated that the injuries have restricted his appearances. Like I said before, it's important that he now goes on to enjoy a spell free from injury. He's only 25 and there is still much more to come from him. Ask any player in the world, even the greats - you can't hit top form if you have niggling injuries.

Do you still keep in touch with Daniel?

No, not really. I do see him from time to time and it's always nice to have a chat. He's a nice kid and the kind of person I like because he always keeps his feet on the ground. No matter what he achieves, he will always be the same.

So if he invited you to his pub in Denmark would you go along?

Ha, ha. Well, I've yet to receive the invitation! But seriously, it would be difficult because I live in Madrid now. Having said that, I'm coming to Liverpool in April for a legends tournament, so maybe he can invite me for a beer then!

Another Dane with Liverpool connections is of course Jan Molby. How good was he in his pomp?

Jan was a great player. He had fantastic technical ability and was very strong, with a good eye for a pass. He was a very important player but I think he would like to have played even more during his time at Liverpool. I saw him recently in Denmark and it is always great to see him because we grew up at the same time. We played together in the '84 European Championships and in the World Cup in Mexico two years later. We share some great memories.

Your careers were very different at club level, but you actually came close to signing for Liverpool at first, didn't you?

Yes, in 1983 I had the opportunity to sign for Liverpool. We actually agreed a deal and I came over with my father to talk to Liverpool's representatives. We agreed a three-year contract and went away thinking it was all done. But two weeks later they came back saying they wanted to offer me the same package, but for four years because I was still young and needed time to develop. I was disappointed because although nothing had been signed, we had an agreement. I decided not to join them and people thought I was crazy. This 19-year-old was turning down the great Liverpool. It wasn't really like that though. I just felt an agreement is an agreement and people should stick to what they decide. After that, I had other offers and went on to join Juventus. That's football for you. 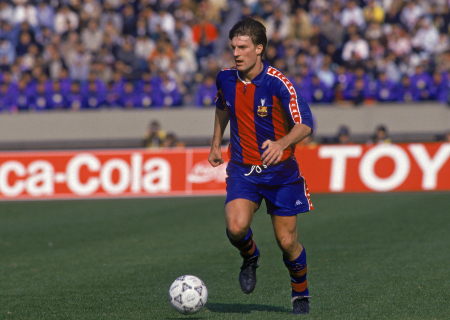 You went on to play for the likes of Real Madrid and Barcelona, but never got to play at Anfield. Was that disappointing given the reputation it has for its famous atmosphere?

You know, it is really strange that I had such a long career and played in so many stadiums around the world - but never Anfield. I have been there though. I was there for the Champions League match against Barcelona about three years ago. You won 2-1 in the Camp Nou and then lost 1-0 at home. It was such an amazing atmosphere that night. I think the word special can be used too often to describe things, but there's no doubt, that is the only word I can think of for Anfield.

It's a shame that the incredible Barcelona side that you played in during the late 80s-early 90s didn't go head-to-head with Kenny Dalglish's team of the same era. Who do you think would have won?

Ha ha, I've never thought about it. It was a great team with fantastic players though. The likes of John Barnes and Peter Beardsley were at their peak back then. But that was how I always remember Liverpool. You have had so many great teams over the years. Growing up in Denmark as a kid, they were the games we saw on TV. Some of my favourites were Ray Kennedy, John Toshack and Kevin Keegan; but do you know who I really liked watching?

No, he was a great player too - but I always enjoyed seeing Steve Heighway in action. He was very effective down the wing.

We have had some great players down the years and there are a few in the current team too. How highly do you rate Fernando Torres? Is he THE best striker in the world?

Well he's right up there. I think there are a lot of great strikers in Europe. In the Premier League you have Wayne Rooney and Didier Drogba as well. Then you have the likes of David Villa, Zlatan Ibrahimovic and Sameul Eto'o. I don't know if you can identify one player as the best but he's definitely in that bracket with those guys. He's had some injuries recently but when he's on form he can be unplayable. Hopefully he will return soon and hit form for you at just the right time. He would then be ready for the World Cup too, which is the biggest stage of all.

Nando recently became the fastest player in LFC history to score 50 league goals. When you consider some of the great forwards we have had, how big an achievement is that?

It's a great record. Like you say, Liverpool have had some fantastic strikers in the past and so to be the quickest to that total is very impressive and shows what a great player he is.

And what about the skipper, Steven Gerrard? Do you like him as a player?

Of course. He has been the symbol of Liverpool for many years now. I don't think people can imagine a Liverpool team without Gerrard. It is like Raul at Real Madrid and Puyol at Barcelona. They are a rare breed, these types of players. He had the possibility to leave and couldn't - the club is in his blood.

We can't let you go without asking you about our current situation and the race for a top four finish. Do you expect the Reds to claim that final Champions League berth?

Up until Christmas it was a very difficult season for Liverpool. It was quite a big blow for you to go out of the Champions League so early. Fiorentina are a good team but not of the level of Liverpool. In the last few weeks results have been better. Okay, you lost at Arsenal in a close match but I think it is still possible for you to get fourth. For a club the size of Liverpool that is probably the minimum target and I think you will hope for better next year. With Torres coming back from injury I think you have a good chance.

Free video: A tribute to the best fans in the world>>