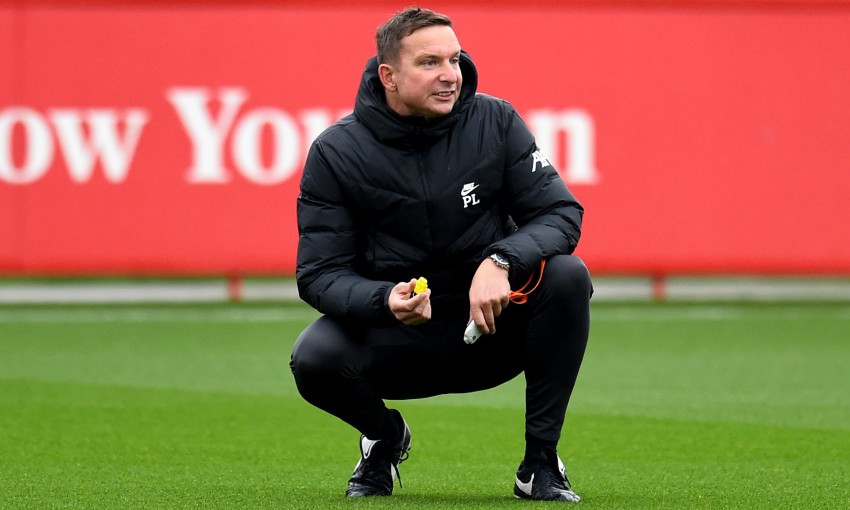 Pepijn Lijnders has provided the latest news on Liverpool's squad ahead of Wednesday night's Carabao Cup quarter-final against Leicester City.

The Reds’ assistant manager spoke to Liverpoolfc.com on Tuesday morning, offering updates on the suspected positive COVID-19 tests in the team, fitness latest, and the likelihood of rotation for the tie at Anfield.

Read the chat with Lijnders below…

Leicester on Wednesday in the Carabao Cup – given the schedule, are we likely to see changes to the line-up?

Yeah, we know we are in an intense period, so what we always do is create a line-up, we make a small plan and we prepare well. And then we want to attack matchday. We will focus on ourselves; we know in these intense periods we need the whole squad. We know that’s something we want – we want to be in these intense periods, we want to play these games and we really look forward to it. What we want is to give our fans a cup night full of desire. That’s what we did before and that’s what we want to do now. If it’s Leicester at home or AC Milan away, that’s how it works.

On Sunday we had four players out with suspected positive COVID-19 tests. How are they and have there been any further positive tests?

The boys are OK. This virus is really unpredictable, so we have to look at it case by case and player by player. Health comes first so we have to make sure we don’t rush it, that they come back whenever they are ready. People underestimate when it’s 10 days’ quarantine, they think they can play immediately on day 11, but football doesn’t work like this. You need training. Because it’s a team sport you need to again get the feeling of the game. What’s most important is that they are healthy, that they stay safe and that we give them time. That we just follow the guidelines and protocols of the doctors, of our scientists. That’s the most important thing.

Sunday was a really intense game down at Tottenham. Has there been any other injury concerns since that game?

No, we were lucky with a few challenges. I want to use this opportunity to give a compliment to the team because if you lose your spine – Virgil, Fabinho and Thiago – in the days leading up to a game like this, away at Spurs – a fresh Spurs – we know it’s not going to get easier. But losing your captain on the gameday makes it really tough. Something I like in football, that we like in football, is that there’s one moment where we go into the last meeting before the game – when Jürgen does the meeting – and we leave everything behind. That’s the moment we agree the mindset and we don’t look back. A big compliment for the team how they dealt with all these changes. You saw in the first half with having 70 per cent possession and creating chance after chance, I think we had like 12 chances and they had five in the first half, we attacked the game in the right way and we created this mindset. That deserves a compliment for the team.

On Sunday, Naby and Millie played 90 minutes after being out. Is Wednesday an opportunity to get some more minutes of the legs of the boys coming back – such as Joe Gomez, as well as Naby and James?

Yes, we have to make sure we are doing the right things by everyone, so for all the players. The past proved we can make changes, we can still play our way. It’s the only way: to play our way. Even when we have a team B, it’s always plan A. So, that’s important. We will come together this afternoon, we will speak about the players, how they feel, what will be good looking to the coming fixtures as well. But the only thing that’s in our mind is tomorrow at this moment in time.