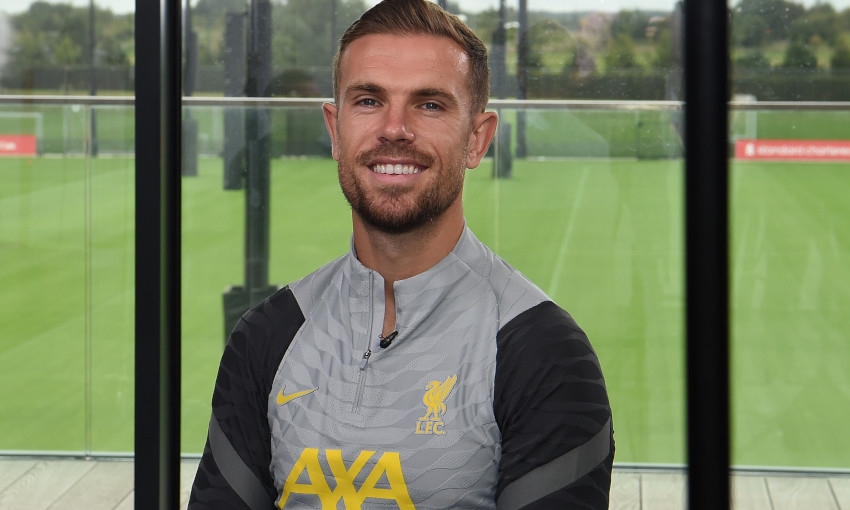 Jordan Henderson detailed his delight at committing his long-term future to Liverpool again – and you can read our full interview with the captain now.

The Reds midfielder put pen to paper on a new contract at the AXA Training Centre today to further extend a 10-year spell at Anfield that has included 394 games, 30 goals and five major trophies so far.

With the deal signed and sealed, Henderson sat down with Liverpoolfc.com to discuss the news, his decade with the club and what he believes can be achieved in the seasons to come.

Read the chat in full below or watch via LFCTV GO…

Jordan, congratulations first of all – how does it feel to recommit to this club?

Amazing, I’m obviously very honoured and proud to continue the journey I’ve already been on here. Amazing to finally get it done and just concentrate on looking forward and what the future may hold.

Does it bring back memories of the first time you signed a contract, the moment you walked in to Melwood and to Anfield for the first time as a Liverpool player?

A little bit. Obviously it’s different now because we’re not at Melwood, it’s a new training ground and stuff. But yeah, it doesn’t seem too long ago when I was first walking in. But at the same time it feels like a lifetime ago as well. Plenty of ups and downs but I wouldn’t change any of it for the world really. I’m just delighted that I can contribute even more going forward and hopefully more success to come.

There’s a huge responsibility that comes with being a Liverpool player, so you’ll have had the feelings when you walked in that day of, ‘What is this going to be like?’ That responsibility is completely different now that you’re the leader of this group of players…

Yeah, I’m in a different place of course, as a player and as a person, from when I first walked in. I’ve learned and grown a lot over my time here, and I’ve got to thank a lot of people for that. I’ve loved every minute of it, even when I look back at the tough times, I was still enjoying being a part of this football club. The longer I can do that, the better for me really. I want to be here as long as possible, I’ve always said that. To continue this journey is incredible for me and my family, and I hope the fans and the club feel the same way.

You hint at it there, it looks like a contract that is close to taking you towards the tail end of your career. It’s very hard to predict what happens next in football but is that the way you would have wanted it to be, that this is the club now for the rest of your career?

In an ideal world; nobody ever quite knows what’s going to happen, of course, in football and things change very quickly. But I’ve always said I would like to play here as long as possible. But to do that I need to make sure I’m playing well, I’m improving, I’m contributing to the team. And then if the club want me to continue on that journey of course, I think it makes sense for us to do that. But the minute one of those things isn’t happening then obviously, the size of this football club and the players here, then things have got to change. But, for me, it’s just about: keep going. I still feel young, I still feel fresh, I feel as though I’m in probably my prime at this moment in time in terms of how I feel physically and experience mixed in. So I still feel as though I’ve got a lot to give and a lot more to come. I know people may look at it and go, ‘Maybe this takes him to he’s 34, 35.’ But I want to be playing football for as long as I can, so who knows what age I’ll go to.

An incredible journey continues… Thank you to all the fans for your support 🤝 @LFC https://t.co/5ge8DPxrgU

You look at one of your best mates in football with that example – Millie is still going strong, still leading all the runs in pre-season. Is he somebody you look at still and learn from?

Definitely, Millie is an example to everyone in the dressing room and a big example to the younger generation as well. He’s a little bit of a throwback to the old school and I quite like that from Millie. He’s very dedicated and professional, as we all know. He’s great to have around the training ground. But he’s a top player as well and I think people forget that, even though he might be the age he’s at now, he could continue to play for another two, three, four years really in terms of his physical shape. So it’s down to him what he wants to do. But every time he played last season – I know he’s recovering from a little injury now – but even pre-season, last season when he played in the games, he was at the top level. You don’t really see it drop off. And hopefully he can continue on that path for the next few years, definitely.

How does it feel as the skipper to see so many of the senior players, top players recommitting, aside from you? You have this huge familiarity with each other now. That excitement of what you can go on to achieve from here must be tangible for you?

Yeah, I’m very proud of all the lads. Every time I see someone get a new deal, it makes me feel happy for some reason, other than they’re doing well and they’ve deserved everything they’ve got really in terms of the lads that have been renewed. I’m delighted for all of them and hopefully there’s more to come in the near future. They deserve everything they’ve got and do get going forward because I know how hard they work, I know every day what they give to this football club. They deserve to be here for as long as possible. I hope the togetherness of this group can take us even further the longer we’re together.

The group has been together, the majority of them, for around three years now. How has the noise and the atmosphere changed between you inside the dressing room before games or here at the training ground?

I think it has changed, I’d definitely say it has changed a bit because over that period of time a lot of people have grown – as players, of course, but as people, as leaders within the dressing room. So I do hear a lot more leadership, I would say, before games maybe in and around the dressing room, people taking ownership of certain things. I definitely do see that, which is good. I like to see people grow, I think that’s important in football. You always look to improve and grow as a person, which I do see a lot within our dressing room. That’s important. Again, we’re on a really good path and we need to continue working hard every single day to get better and go for everything. 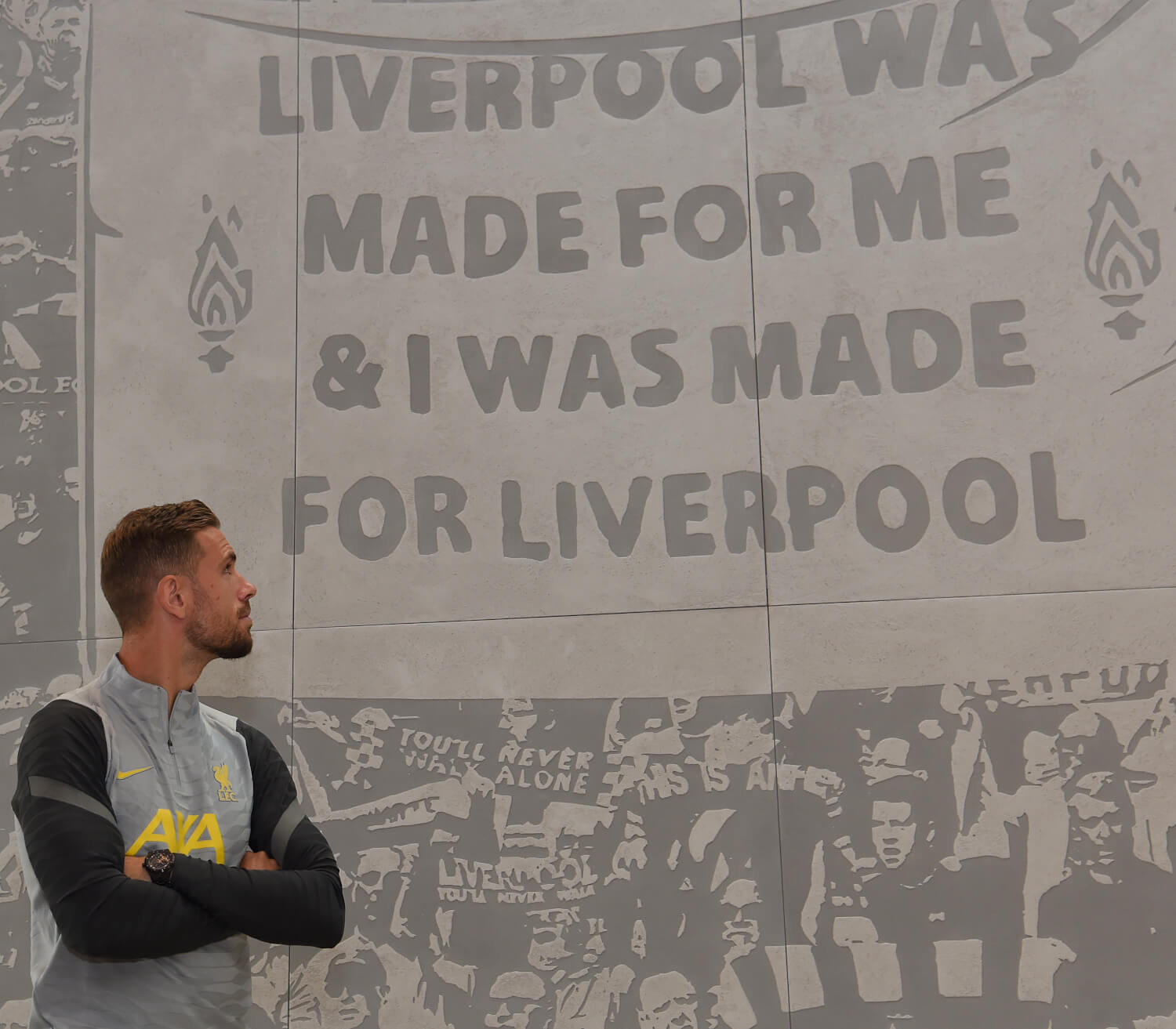 Yeah, probably, but I think that’s part and parcel of football and life in general. You’ve got to adapt and change and learn from your experiences to become better. That’s all I ever try to do. I look back when I first signed here, every single season I’ve tried to be better, I’ve tried to improve, I’ve given absolutely everything for this football club and my teammates – and that will never change, I’ll always do that. But things that do change is little mistakes you make, things that you experience that you can be better at and you learn from. I certainly try to do that as well. There’s parts of me definitely that have changed but there are other parts that will never change also.

And what about the influence of the manager, the influence he has had on you as a man and obviously you’re his leader on the pitch. What kind of guy is he to work for and how much are you looking forward to that going forward also?

I’ve spoken a lot of times about the manager, how special he is and how all of this success we’ve had over the past few years, a lot of it is down to him. He’s an incredible manager to work for, both on and off the field. So for me to continue on that and learn from him hopefully over the next few years is huge again for me. He’s been amazing for me, not only as a footballer but as a human being and trying to learn in certain areas that I need to improve, as we’ve just spoken about. He’s a very good judge of that and where I can improve and help the team and help me personally within this environment and also when I go home. Yeah, he’s a very important person for me to look up to and I’m sure a lot of the lads feel the same.

Just finally, does this feel like the biggest season of your life again?

Every year is the same, every year is the biggest challenge, the biggest season ahead. I feel as hungry as ever. I feel as hungry as I did when I first walked in 10 years ago, to prove to people that I deserve to be at this football club and give absolutely everything every single day for the badge, for the fans and for each other in this building. If we do that, I feel as though we’ve got a good chance of being successful.