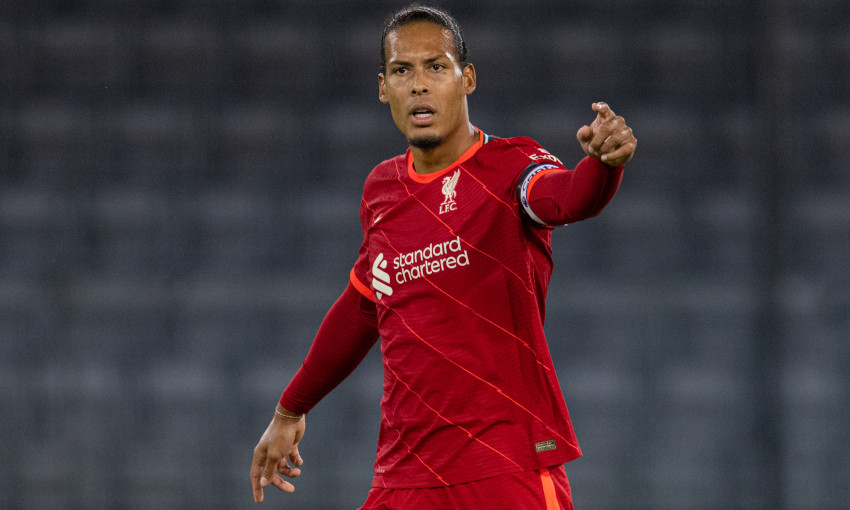 ‘I’m ready to crack on and push on again,’ is the emphatic message from Virgil van Dijk following his return against Hertha BSC last week after nine months out.

Along with Joe Gomez, the centre-back entered the pitch in Tirol for the final 20 minutes of action to mark a first appearance for Liverpool since sustaining a knee injury and subsequently undergoing surgery last October.

With that milestone achieved, Van Dijk is now targeting more minutes in the forthcoming friendly matches as he continues to build towards a return to full fitness ahead of 2021-22, with the No.4 in line for a longer runout against Bologna on Thursday.

Speaking for the first time since making his comeback, the Netherlands captain sat down with Liverpoolfc.com at the team’s hotel in Evian to reflect on his appearance against Hertha, discuss life at the Reds’ training camp and look ahead to the new campaign.

Read on for our exclusive chat with Van Dijk, or watch in the video below. App users can tap here to watch.

Virgil, it’s the first time we’ve spoken to you since you returned – firstly I guess, the question is how are you?

I’m doing well, I’m doing well. It’s obviously been a tough pre-season, coming back from such a long time to be playing and training with the boys again is a big thing. It’s been tough at times, but we try to manage everything with Andreas Schlumberger, who is in close contact with me and Joe [Gomez]. We’re still getting managed, but we’re doing very well.

You’ve reached a couple of big milestones out in the training camp, returning to team training and getting some minutes against Hertha BSC. What has that meant to you?

A lot. It’s something I’ve worked for [for] so long. It might be a small thing, but the start of team training was such a big day for me; normally I don’t really get nervous but those kind of small things make me, not nervous, but a bit excited and stuff. The same goes for the game – you’ve been visualising so many times yourself playing a game again and just to be out there again. There are obviously plenty of things to improve still and to get back to full fitness, but to get out there again gave me so much confidence. I am just ready to crack on, to push on again. That’s what I want to do, so I just keep going and the next one is on Thursday.

What was that day like against Hertha? I think at the start of the week the manager had said it was possible you could figure and then as the week went on, we knew it was very likely. What was going through your head that day?

I think from day one of pre-season, day two when we started to have team training, it was always going to be a case of how things would go because no-one really has an idea of how me and Joe were, in that case, [but] also how it reacts because that’s the most important thing. You can do team training again, but if your knee reacts to it or your knee can’t handle it then obviously you have to slow down a little bit. Surprisingly for some, things have been going very well, no reaction, the feeling is good, the confidence is there and it’s just about getting back to fitness. In the beginning, we didn’t have double sessions and as the time went on, we started to do that well, progressed, so I felt like I was ready to get some minutes. That’s what I said to the manager and to Pep [Lijnders], then we had the discussion with Andreas Schlumberger. That’s how the ball started rolling and then we started to build up to the game. Your family knows about it, that you’re going to get your minutes and then it comes [out] in the media, so everybody is already on the edge of their seats and looking forward to it – probably me the most out of everyone. We trained in the morning, it was just an easy session, and then in the evening we had the game. After the game, I was empty, drained – I’d played 20 minutes, but it wasn’t because of the game, it was because of everything that had happened the whole week and the whole day. That’s something that sums it up because it was not only the game that was so intense, it was everything around it as well. The whole preparation, your whole mind had been going into a mode [in] that you’re overthinking everything. You think about what you’re going to do on your first touch, what you’re going to do with this and that. So, as I said, I was just happy that this was done, we did it, and now it’s just to crack on again. Thursday is the next one.

After months of hard work together, back on the pitch together 🙌 A fitting moment ❤️ https://t.co/l6WleegrRQ

Well, you did do it and you did it with Joe. I think one of the most shared videos we’ve made out here was the hug on the touchline. What was that like?

What is the plan now that the game – the first game – is out of the way? Is it a case of building up those minutes in matches and working on your fitness in training?

Yeah, definitely. Obviously Andreas Schlumberger is in close contact with the coaching staff, with Pep and with the manager. That’s how we make sure we are making – and taking – the right decisions. We are in close contact with Andreas making sure we are giving the right feedback, we have to be honest with ourselves, and that’s how we are where we are at the moment. The same goes now for Thursday; I’ve heard we’ll play at least 30 minutes, but it could be maybe longer, and then we just build it up. We have another friendly which I am looking forward to at Anfield, of course, at the weekend or on Monday, one of the two, so I will get more minutes then if things go well. Then the league will start. At the end of the day, it’s all about what the manager wants and we will see how it progresses.

It’s coming at you fast now though, isn’t it? All these games and milestones…

Yeah, but it’s something we need. I said to Pep two days after the Hertha Berlin game that even though I was drained after the game, I felt like I wanted to play again tomorrow. It is just that feeling of being out there again, progressing again, getting yourself more rhythm. It’s crazy to think that you are going to be top again when you didn’t play a professional game or a high-level game for nine months, so you just want to have repetition, you want to continue, keep repeating things. I know for a fact that training on your own can’t replicate training with the group, but training with the group can’t replicate what is going on in a game. So, you need those games. I am taking it all in, it’s tough and there will be difficult moments, but that’s something I take in.

Generally speaking, how high has the level been in pre-season training among the group?

Very good. I think very good. It’s looking sharp, it has been very tough. I see a lot of the boys doing the 1,000-metre runs and I am trying to skip that… I like it for Millie, Mo, Sadio and those kind of runners! The standard is very high, we train hard, we try to get the right tactics in again and hopefully get ready for a very, very good season altogether. It is going to be a tough one with teams that are improving all around us, trying to compete to become champions of the Premier League. So are we – we want to be up there again, go for it all and we set the base at the moment.

On that note, it was a difficult season for a lot of reasons, but we finished third. What is the feeling among the group going into this new season?

Just to be positive. I think positivity is a very important thing, we have the quality – that is obvious. We were just very, very unlucky with injuries last year, especially in the centre-back position. In the end, Rhys, Nat and Ozan did a fantastic job to make sure we have at least Champions League [qualification] and we come third. But we have been unlucky in some positions that made it very difficult for us as a team to play the same way and have the same intensity we normally have, so we’ve worked a lot on this. We hope – and we try – to stay fit, all of us. That’s something we shouldn’t take for granted, if that happens.

How are you finding training camp life? Four weeks away is a long time…

Yeah, especially when you are nine months at home… or not at home, but with the family. I really, really enjoyed that. Then to go to the training camp, you think it might be a good thing but four weeks is quite long! So, I am looking forward to being back home, a change of scenery; being with my family and my kids will be massive, but it is part of it. Everyone is working hard, you’re getting fit and that’s the most important thing in this environment. Hopefully we will be ready for a good season.

There are a lot of things going on in the downtime when there is some. How important is that?

Very important. It is massive to keep doing those things. We are a very tight group together, but to keep these things up is just great to do and to get everyone involved. The chefs, the people behind the scenes… it is just important because we’re all here with the same goal and we want everyone to make sure we are creating positive results. That’s where we need everyone, so it’s good that we do these things outside of training to get everyone in a different setting. I just really enjoy it.

Has anyone’s personality really come out over the last three weeks that maybe you didn’t expect?

I think everybody is just being themselves. There are a couple of new faces around and the young boys. It’s always nice to see the young boys being lifted and coming out of their shells and stuff. Kaide Gordon, who is 16 years old, is coming out of his shell, he is training well and is a great talent. It is fun to see and we need everyone, whether you are a chef or the new kitman, we need everyone to perform. I appreciate all of them.

You mentioned earlier about going into the new season and the squad’s aims and targets. When you look around and see everyone pulling together, is that one of the things that gives you the confidence it can be a successful season?

I think that should be a standard in a team. You should be able to have a good team spirit, otherwise you wouldn’t succeed anyway. So, that should be the base layer of success, to have that right team spirit. Then it’s all about what happens on the pitch in that 95 minutes. Anything can happen in that case, but if we are doing it all together, pressing together, defending together, as we always want to do it, we always have a good chance to get a good result. So, that’s the focus we should have and I am confident that will happen.

Yeah… me too! Hopefully it will go well again and then I can’t wait to see everyone at Anfield.