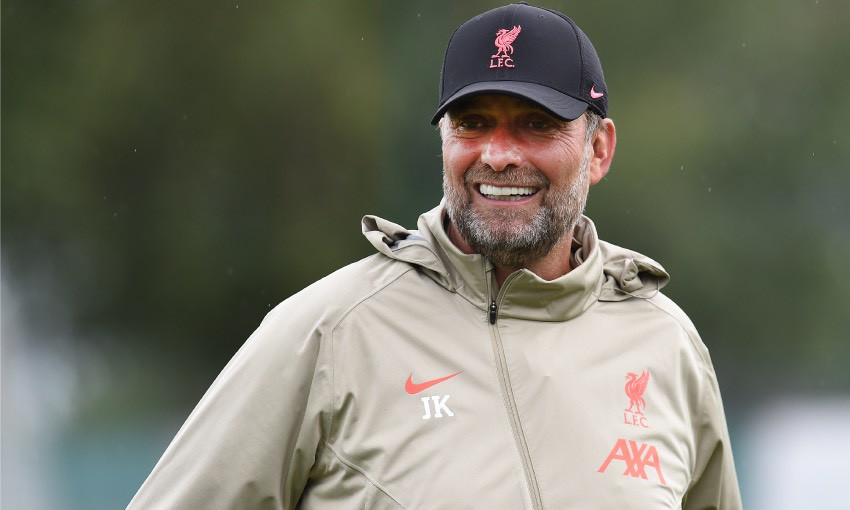 Jürgen Klopp sat down with Liverpoolfc.com in Evian on Sunday to provide fresh insight on Liverpool's pre-season training camp and preview the upcoming friendlies with Bologna.

The Reds have been boosted in France by Alisson Becker, Roberto Firmino and Fabinho after they returned from their summer breaks following the Copa America.

The boss revealed the Brazilian trio could feature when his squad contest Serie A opposition in two 60-minute matches on Thursday, while also explaining the reasoning behind the hour-long games.

Read on for the full transcript of the wide-ranging interview...

You're away for a long time as a group – is one of the benefits of switching to Evian a chance for a change of scenery and to freshen things up for everyone?

Oh yeah, we had to. I never did it before. I said it before, never a four-week camp; never a three-week camp actually. And after two weeks we changed scenery, then after the next week again. That's important. But we were not for one second abroad for changing scenery constantly, we could have done that in England obviously as well. I think everybody knows we had to do it, from our point of view, to be in the bubble and that we can welcome all the players in the bubble from wherever they came and they don't have to quarantine and all these kind of things. They arrive here, get tested, all these kinds of things – and then we can focus on training. We didn't see any other chance for us to do it in that way, that's why we are now a little bit on tour, LFC on tour. Now we are in Evian and all good.

How challenging is it to keep a group happy for so long, especially when you've got so much work to do?

So, in Germany you say: I don't want to praise the day before the night. So, we are three weeks here and it was perfect so far, but there is still a week to go and maybe now they turn nuts or whatever! I don't know! But so far it was not too challenging, to be honest. We thought a lot about what we can do, what we have to do. We did some things – we had quiz nights, we had some other silly stuff which we did together. And still the big ping-pong tournament, everybody is waiting for – probably they train the whole day! So that will come up. We have other stuff organised, interesting things where the boys will get some entertainment and information and hopefully some interesting stuff which will help us for the future. That's what you do. We train a lot, then the boys sleep hopefully at least a lot and get proper food. And so far the pre-season was really OK.

Who would you put your money on for the ping-pong tournament?

I forget these things [but] 100 per cent not on me. I think Mo wins quite regularly, if I'm 100 per cent right together with Ox last year. You must be lucky with the draw, that's how it is unfortunately – if you are a very good player together with one of the staff then no chance! The boys are pretty much all pretty good. But the good feeling about that tournament is you have to carry your partner through the tournament as well.

That was like a proper football answer, the same kind of answer I would have got after a Champions League draw…

I would say in the ping-pong tournament you need to be even more lucky. Really. If you get the wrong partner... you know with table tennis: it's you shoot, he shoots, you shoot. It's a 50 per cent chance the ball flies through the room. That happens quite often.

You're having players come back bit by bit. The Brazilian guys are back now – how do you work to integrate them into the group now?

It's a challenge for us, you can imagine. Last week, I think Shaq, Diogo, Robbo, Thiago – not the same day but in the same week at least – came back. Now the Brazilians. I saw them this morning already but I spoke only a few words because they had still holidays, they had to do the lactate test yesterday because they had to run anyway. That's how it is. They will start tomorrow with training properly with us. That's then pretty much we are nearly complete. Hendo will not be here probably until the end, he will get included in England. But that's all planned like this. It's a challenge every year. Every year. We work on so many things and then the new boys come, then the next boys come in and you think, 'OK, by the way, so far we did and so on.' In a specific point we have them all together and prepare for the season. But it's always the same and so, normal business.

The season is under two weeks away now. Is it difficult to try to plan to have these guys involved at that point? Or will they have enough time?

No, they never have enough time. The players who play international football never have enough time, that was always like this. This year was the best year, though, but they never have enough time. You never have enough time to train and stuff like this – a week, two weeks before the season. So the Brazilians now, two weeks. I think last year it was 10 days, if I'm 100 per cent right, for the first game. But nobody listens about that, nobody is interested in that – we just carry on like this and everybody expects in the end kind of perfect-tuned football teams. There will be a moment in the season when that happens but in the beginning it's pretty much for all teams the same, so it's a fair competition. It just means we are all in the same place. We have to make sure we can win football games, we don't have to play the best football in the world, we just have to win football games. Then step by step, finding our way again and that will happen for sure.

But in the beginning especially, for the boys it's not easy but that's how it is. The good thing is in three weeks' holiday you don't lose a lot. They don't have three weeks' no training – I say that every year as well. But after 10 days, they start already with training again, just not football with us. So, they are fit, they don't lose a lot and we can use them pretty quickly in the games. That's why we planned it like this. Maybe on Thursday in our two 60-minute games against Bologna we can involve them already, I don't know yet – maybe 15, 20, 30 minutes. We have to see how they look exactly. Then we come home and obviously we still plan football games, so we have the two games at Anfield. There's one team who plays that game and it's maybe more likely, I don't know yet, for the weekend later and the other team who came a little bit later then they will play the second game – so everybody has 90 minutes in their legs. Then we play the first game against Norwich, then we probably have again a pre-season training game on Sunday at Kirkby or wherever, just to try to give them all a chance to get some rhythm. That's how it is.

How do you approach the two games on Thursday against Bologna – two different teams?

Yeah, that's the plan. For sure now we have enough players who have to play 60 minutes, that's clear. But we have some, they are maybe not allowed or should not play a full 60, so some will play 30, this kind of stuff. It was just like this: we have for sure a team who could now play 90 minutes but it doesn't make massive sense to do it already, to push through. What we did this year was slightly different from other years. I think everybody knows we train what we have to do and then you play the games on top of that, but usually the next day when you play 45 early or 60 minutes early in the pre-season then you have to calm down a little bit in training and we didn't do that this year. We just could go through intensity-wise, which helped, I think, a lot. So, now we have the double 60 – I really like that, Bologna was fine with it as well. So, all good and then on the weekend – Sunday, Monday – two big games at Anfield.

The good attacking play in the last game against Hertha BSC – is that what you want to see again and just be a little tighter at the back?

We have to improve in all departments, of course. We played some really good stuff, that's true, but if we didn't score from it, who cares? That's football. For not losing football games you have to make sure that you don't concede goals. The goals [against] were easy to explain, why they got it, and probably to explain as well why the players involved in the goal were not where they maybe should have been. I absolutely prefer to make these kind of mistakes in pre-season because you can talk about it, it's easy; yes, we criticise it, but not in the manner where we say on top of that we lost three very important points. It is just a pre-season game, make the analysis and carry on.

It is clear we have to improve; we have to improve offensively as well. But from a formation point of view – how compact the formation is and so on – we have some space [to improve], but that's always the same. When I look back at the years, it was always learning defending again, like pressing again, is as much to do with timing. Timing has to do with a clear brain and fresh legs, but you never have [them] – fresh legs especially – in the pre-season. It is pretty much not possible, but you still want it. In training it looks good and when we don't do it for 45 minutes, just like two or three or four minutes, and really adjust in the right way then it looks good and so I am happy with it, we have to just make sure we get the right mindset for the first game because that's the biggest difference – it's not a pre-season friendly anymore, we have to go with all we have. We only do all of these things because we want to win football games – we want to win many football games – and win something special.

Virgil and Joe, are they ready to play again, and maybe play more minutes?

Hopefully, yes. That's how it looks in the moment. I want to make it really clear, we push nothing. We just don't. We wait a little bit, the players come, we have now with Dr Andreas Schlumberger a real specialist who is in constant talks and always observing everything. We know exactly how they feel – how they really feel and not what they tell us because they obviously are desperate to play again. It looks good, this morning [it was a] normal training session. Sometimes in moments we swap Virgil and Joe a little bit so maybe the intensity doesn't get too high, but in general it looks really good. How many minutes on Thursday, I don't know but there will be some minutes for sure.