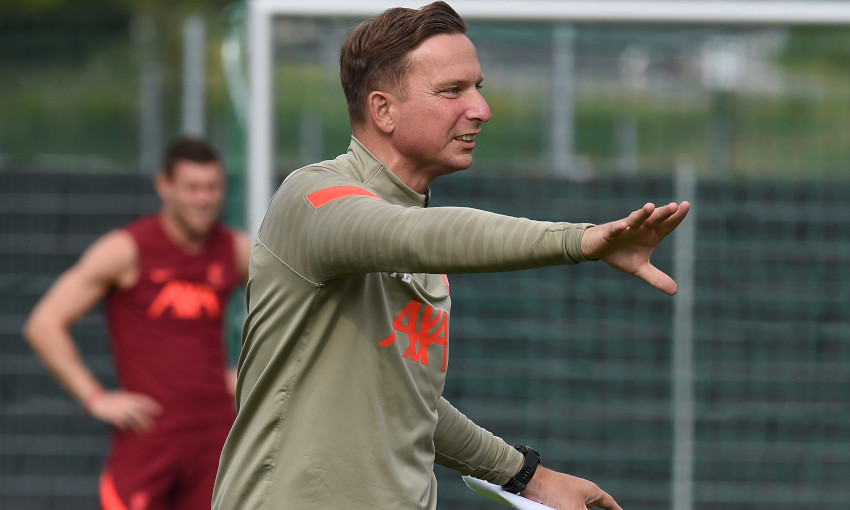 Pepijn Lijnders has filed his latest entry in his Austria training camp diary series, detailing the latest training ground drills – including the forfeit rondos – and lifting the lid on the table tennis competition in the players' games room.

Since my last diary entry, we’ve had two days of positive training in the wonderful setting of Tirol.

Tuesday was a ‘bridging’ session. We used it to recover the mind and activate the body with a 4v4 tournament, but firstly we did rondos where the boys needed to react on my whistle.

One whistle, move to the left; two times, move to the right. The last two arriving in the ‘new’ square had to start in the middle.

We let the group of Virgil’s run the longest way every time. Jürgen said constantly in my ear, ‘Do it again, Pep – let Virgil run!’ It was only the moment when Jürgen and I were laughing so hard that they realised they were the only team who had to constantly sprint 40 metres instead of 10!

On the signal ‘Go!’, they needed to keep the ball in the air and manoeuvre through a few obstacles, with the only rule that they all needed to be involved.

The winning team, after appeals from Jürgen and Millie, had ‘forgotten’ Kostas. The rules were everyone had to touch the ball before finishing the drill.

Nowadays, we have VAR in football and so we checked with our analyst later and at the end of the session, Jürgen confronted the ‘winning’ team with this news. Virgil already started the push-ups while the boss was talking, haha! Players know exactly when it’s right or wrong, especially the big guns, and this time they didn’t get away with it. Sadio made sure of that.

Naby didn’t get away with it as well because he was standing behind the coaches and trying to avoid the forfeit.

Afterwards, we played the 4v4 games; short space and short time, with two groups of 12 making three teams of four. Yellow was 3-1 behind after eight games but in the ninth and final game they turned everything around to 4-3. These turnarounds only happen when it’s ‘finals’. The ones on the outside, the other eight players not involved, were screaming and helping the ones who were playing. This environment is what we were searching for – top, top, top. Nat also wanted me to mention this comeback in this entry!

After this, we knew they would be ready for everything in Wednesday’s sessions; ready to take information, to focus on organisation and the right distances. It’s a tactical day, a real MD-1 day – we prepare them for battle, haha! A tactical overview with the highest intensity.

In the season we do strategical revision as well but now we focus only on ourselves. Mark, one of our analysts, created three/four short videos showing our offensive principles, for example.

We split this MD-1 day over two sessions – one early in the morning and the other late in the afternoon. That’s the real advantage in pre-season. The two teams were really equal, that was always the case in our good phases. The amount of times after the MD-1 session we said to each other, ‘So happy we don’t play the yellow team tomorrow.’ That’s top sport at its best – all of the squad fighting for a position, dealing well with the emotion of not playing.

On Tuesday night, Ray and Mona organised a team dinner within walking distance from the hotel; it was in a hut with long tables overlooking the mountains. The group is growing together, at night time there is a great ambience in the games room and in the medical room.

In terms of table tennis, Mo, Leighton, Virgil and Joe are the best players, I think. Curtis on his day, too – his games against Trent are always interesting and very funny. Curt won the last game between them; Rhys says Trent should wear a GPS when he plays because Curtis had him running like crazy!

The boys have also been playing chess online against each other. It’s such a great game, it creates anticipation and consequences. Music plays hard, young players competing with darts or table tennis, the seniors getting treatment and joking with staff and each other. Robbo, Virg, Millie and Kostas are definitely the loudest in there! It’s a place really only for the players and I love the atmosphere players and staff create together in there.

We have huge respect for our medical staff, who are with the boys during the whole day to give them everything they need. For example, Paul Small, our masseuse, has been 20 years inside our club. That deserves a medal anyway but we underestimate many times the hard work top-sport massages take.

And respect for all the staff who stay with us during the whole four weeks. Together, strong. So far so good, but we all miss our families after almost three weeks away from home. However, we have to keep the spirit and energy high.

Philip Holliday, our travel manager, is someone who is in constant control about the travel changes due to the pandemic. It’s always great to have him around, it means we are at the big occasions, haha! The more we see him, the better our season is!

Together with Ray, he organised so that all players could come from their holiday destination directly into Austria. That was our plan – to create a bubble for the whole time we are away. It’s easier said than done with all the COVID regulations.

He carefully selects the hotels we are going to; we’ve learned that we prefer to be with a hotel that really wants us instead of maybe a hotel with more quality. Because with good people you get the best treatment, so we really can’t complain about all the conditions they create for us. These people make our life much easier. There is a great saying that being true to yourself, you are going to be true to everyone else. That’s the family environment we try to create, everybody can just be themselves. Honesty and humbleness throughout.

LFCTV GO: The latest edition of Inside Training from Austria

We had a good, hard session on Wednesday morning. The highlight was the pressing of the yellow team. Leighton also played a brilliant through ball to Diogo, sending him one-on-one. Vitor also took a small group for some extra work and Jake Cain scored seven goals, including some worldies.

Mateusz is back training with us tomorrow. He had some problems with his knee but it’s great he will be back with us on the pitch. These boys just want one thing – to play and play. That’s the one characteristic they should never lose: passion for the ball, the game and our club.

Tomorrow is our next game against Hertha BSC and we expect another good test and workout for the boys. I hope you guys will watch us on LFCTV GO.