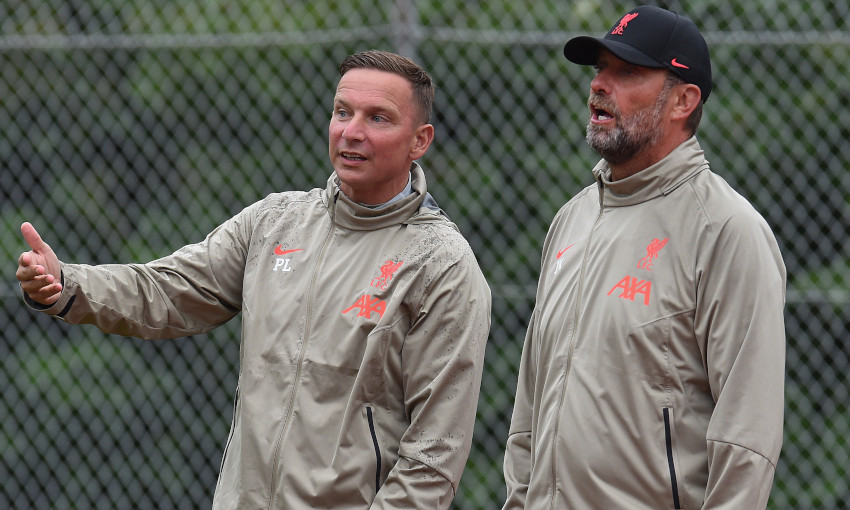 Match Centre: Reds draw twice in Austria - how it happened

In his latest update for his training camp diary, Pepijn Lijnders offers an update on Liverpool's training schedule, reveals some of the highlights of Saturday's team quiz and 'pressing the red button'.

Sometimes the best sessions are the ones on a pitch fully covered in water, where the players have to be cleverer and more spontaneous in order to keep the ball; lift it up to outplay a slide tackle or a hit a lifted pass to make sure it arrives in good condition to your teammate.

At the last minute, we’ve had to move pitches two times and adapt quickly to the weather here in Austria. The grounds staff were running to put the lines on it, but that is obviously nothing compared to the problems that have been happening in Europe with the rainfall.

It was a few years ago that we decided to take Warren [Scott] from the grounds staff with us on our training camps in order to have the pitches at maximum quality. He knows what we want and how we like it to be prepared, so it’s a big plus to have him with us in pre-season.

On Saturday, we gave the players a session called ‘11 v 11 impulse’ on three quarters of a pitch. It had everything an 11 v 11 needs to have: tactics, collective and a proper winning mentality. I believe after technique, this is the most important aspect of our game. Only then we can trust our attitude in the big games; the oldest football rules are the best ones, in my opinion.

Jürgen always says that everything starts with ‘What we do, we do together and we do with 100 per cent’ and so far this is absolutely the case inside our camp. This is such a strong message while working with so much talent in your group because there is no collective without good players, but there is no success without a collective.

Inside this atmosphere of pressing and counter-pressing, there were two or three unbelievable team moments, finished off by James and Sadio. Millie thought it was time to strike, and how... from far away into the top corner, hitting the crossbar on its way in.

It happened after the yellow team had twice created big problems by applying pressure everywhere. It proved that with ‘help’ every situation can be a counter-press situation.

We are preparing for 95 minutes of being able to play with full energy, we are increasing step by step the volume of this intensity, so we played five blocks of five minutes trying to make it a chasing party.

Johan Cruijff said the quality of the first touch dictates the rhythm of the game. This is so true. When we do tactical rondos, we give our midfielders the chance to work on their link-up play stimulating a perfect first touch. Everyone else plays with one touch, only our midfielders with two.

We begin a new week here in Austria with the first of our pre-season friendlies coming up tomorrow, when we face Wacker Innsbruck and Stuttgart in two 30-minute games.

Games are moments where we can show our concentration and a moment where we can develop the team. It gives us feedback about the players and about the team. The first whistle should be like pushing the red button, even in pre-season.

Sunday was a day off for the players and staff. We decided to do this as a chance to clear the head for everyone, give some proper rest to the body and get some extra treatment. We had six top days with nine sessions before this, so the boys really deserved a rest.

I went on a mountain bike tour with Vitor to take in some of the incredible scenery we are very privileged to be able to see here in Salzburg – and then in the evening, we arranged for players and staff to go for a team meal in a reserved area at a local restaurant to make sure we remained within our bubble.

Of course, I am sure by now you have perhaps seen the footage online or read Jürgen’s comments about the team quiz we held on Saturday evening in our hotel.

I have to say, it was a superb moment for all the players and staff. We had eight teams of 10, with everyone mixed and the members of each side drawn completely at random. In these moments you feel that the mentality of the group changes and we come together.

As well as question rounds, we also had some activity rounds – and I have to say, the highlight was Naby doing about 50 keepy-ups with a tennis ball… in his flip-flops. That was just crazy! Our bus driver, Mike, had problems with one of the challenges… if he drives as nervously as he played the game, we won’t reach many stadiums this season!

In the group I was in, we had a proper mix of talent. We had Kaide Gordon, who knew all of the songs, as well as the English experience of Ox and Joe. Myself and Vitor were representing the coaches and then some of the staff from the different departments here with us in Austria.

When I was preparing to write this column, I asked Ox and Joe what our strong points were as a team… we didn’t find many in terms of getting answers correct, except in the music round and dingbats, but we had a strong positive energy among us.

But, unfortunately, we were the team who finished in final position and so had to do the dancing forfeit for the group’s enjoyment. It was real fun, to be honest – and me saying that says everything about how it was! It was good for us all to be together, with everyone from all the different departments and roles playing their part.

We did feel there were a couple of questionable decisions from the officials, but we’ll leave that there! 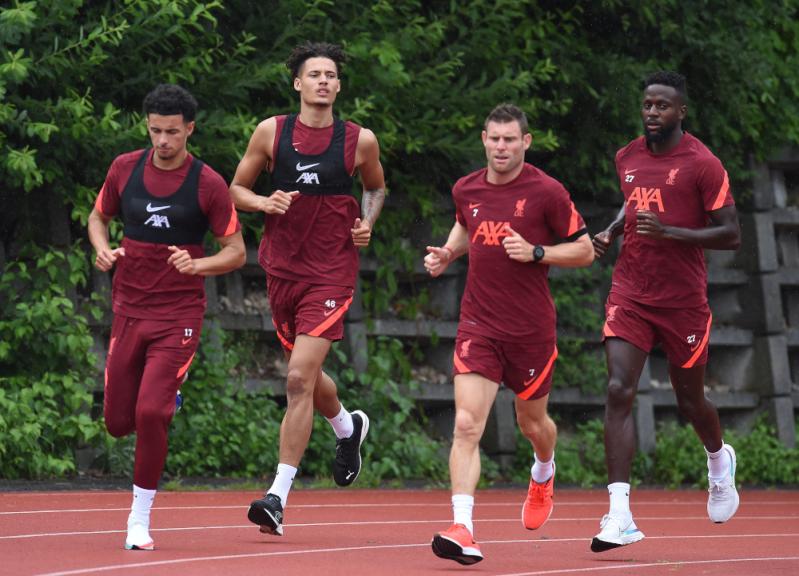 On Sunday, Neco Williams and Harry Wilson joined the group after playing for Wales at Euro 2020 and will start today – and it is back to the training pitch for the rest of the group for two sessions in preparation for our friendly matches.

In this morning’s training, we did a counter-press rondo and an attacking rondo to start. The names of them explain the whole idea. In the attacking rondo they had to create give and goes, one v ones and third-man runs to gain points.

After this we played our identity game; three teams of eight earning the right to attack more – and we did this over the whole pitch! With the team breaking the halfway line having a short time to finish the counter-attack.

Virgil and Joe completed the whole session, too, which is great news.

We’re all looking forward to taking the next steps in our pre-season – it will be a good test for the boys.