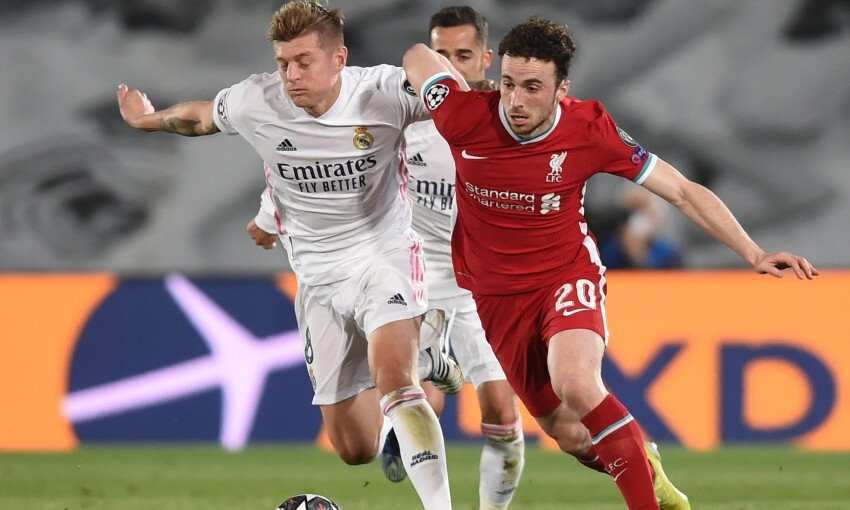 Liverpool suffered a 3-1 defeat by Real Madrid in the first leg of the Champions League quarter-final in Spain on Tuesday evening.

The Spanish side took the lead on 27 minutes at Estadio Alfredo Di Stefano when Toni Kroos’ pass over the top sent Vinicius Junior through before he struck home.

Marco Asensio added a second, profiting from Trent Alexander-Arnold’s misplaced headed clearance before the break, but Mohamed Salah reduced the arrears shortly after the restart by hammering in from close range.

However, Vinicius Junior increased Real’s tally on 65 minutes, leaving the Reds with work to do in next week’s second leg at Anfield if they’re to progress into the semi-finals.

Jürgen Klopp made three changes from the weekend victory at Arsenal, with Diogo Jota, Georginio Wijnaldum and Naby Keita coming into the XI to replace Roberto Firmino, James Milner and Thiago Alcantara. 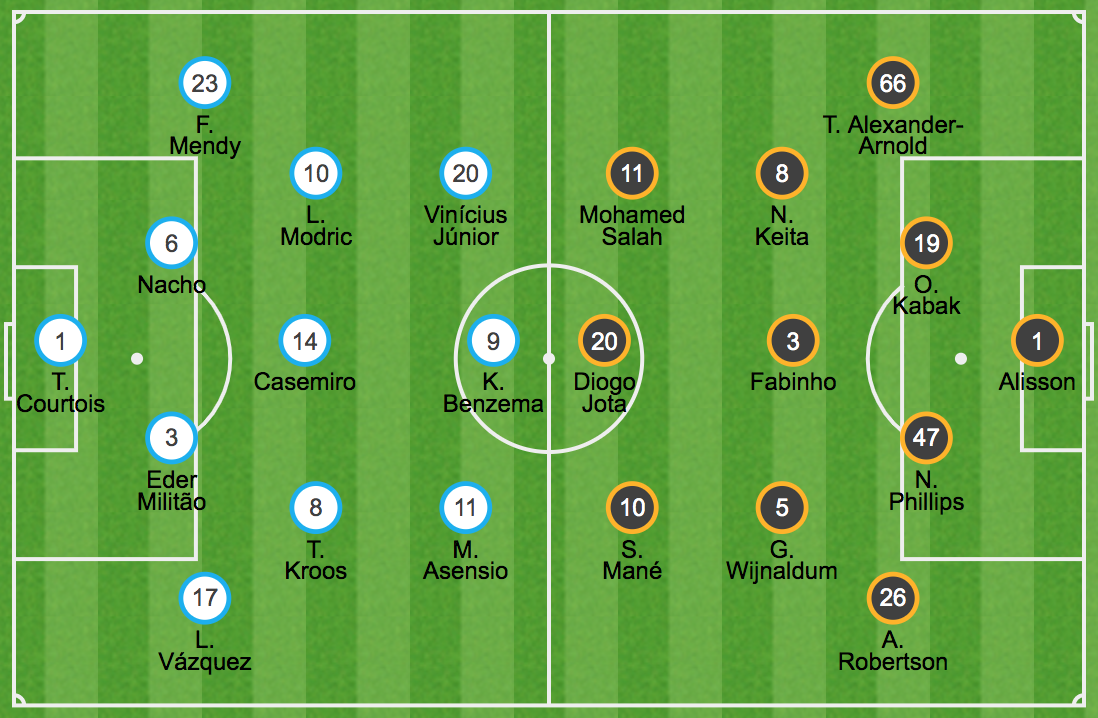 Just a little shy of three years since meeting in the 2018 Champions League final in Kiev, the teams went head-to-head once more to contest for a berth in the last four of the tournament.

Due to extensive renovation work, the setting wasn’t the hosts’ iconic Santiago Bernabeu, but the Estadio Alfredo Di Stefano on the grounds of the club’s training complex.

As bright sunshine turned to darkness in the Spanish capital, it was Real who made the more assertive opening to the evening with an early sighter from Karim Benzema dealt with routinely by Alisson Becker.

Soon after, Ferland Mendy’s raid down the left resulted in him picking out the head of Vinicius Junior, who nodded a few inches wide of the base of the far post.

In the 25th minute, Liverpool required outstanding recovery work from Ozan Kabak to thwart Benzema after the striker looked to have gone clear on goal, with the defender making up the yards to block the eventual shot.

But two minutes later, Real went in front. A long pass from deep from Kroos found Vinicius Junior’s dart infield. He controlled on his chest to move away from Nathaniel Phillips before drilling beyond Alisson.

The same man caused concern again soon after as Real looked to strengthen their grip on the occasion, but this time Phillips was able to divert his strike behind with a block.

However, a second goal did arrive with 36 minutes on the clock as Alexander-Arnold inadvertently diverted a ball from Kroos into the path of Asensio, who scooped over the advancing Alisson before nudging in.

Liverpool introduced Thiago into the action before the interval, with the Spaniard replacing Keita, but Asensio almost added a third when he latched onto Kabak’s miscue and struck goalwards; however, Alisson was able to deny him with his leg.

Liverpool began the second period purposefully – posing more questions of their opponents’ defence than they had in the opening 45.

And that intent was rewarded in the 51st minute when Salah slammed in off the bar from close range after Jota’s shot had deflected into his path following a storming run from deep from Wijnaldum to create the opportunity.

Shortly after the hour, a speedy counter-attack needed the intervention of Mendy to prevent Sadio Mane from converting Andy Robertson’s cross.

Real hit the Reds with a rapid break of their own from the resulting corner, but Alexander-Arnold did outstandingly well to thwart Asensio’s attempted square ball for the unmarked Benzema.

However, the home team added a third goal to their tally on 65 minutes when Vinicius Junior swept in from Luka Modric’s pass inside the box.

Alisson then denied Benzema at his near post while Thiago hooked over the bar from the edge of the box at the other end.

With 10 minutes remaining, Xherdan Shaqiri and Firmino were introduced, taking the places of Kabak and Jota, and Liverpool applied heavy pressure to the Real defence, but were unable to grab a second strike of the evening, meaning they’ll be required to try to overturn a two-goal deficit at Anfield next week.