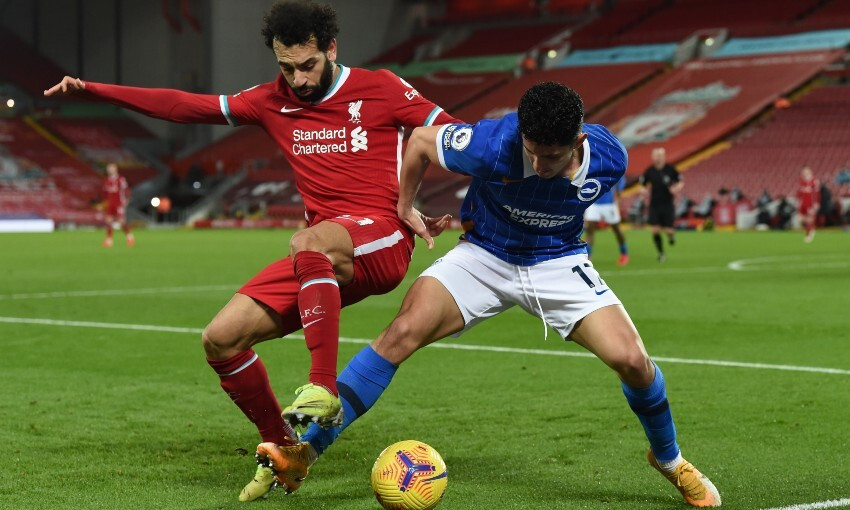 Liverpool suffered a second Anfield defeat in succession as they were beaten 1-0 by Brighton & Hove Albion on Wednesday evening.

Steven Alzate clinched the game's only goal for the visitors in the 56th minute when he nudged in from close range following Dan Burn's header back into the danger zone.

The Reds pressed in search of a leveller in the closing stages, but were unable to break down their opponents, who held out for victory.

The teamsheet confirmed two changes for Liverpool from the weekend win at West Ham United.

With Alisson Becker ruled out due to illness, Caoimhin Kelleher started in goal, while Roberto Firmino replaced Divock Origi in attack. New signing Ben Davies was on the bench. 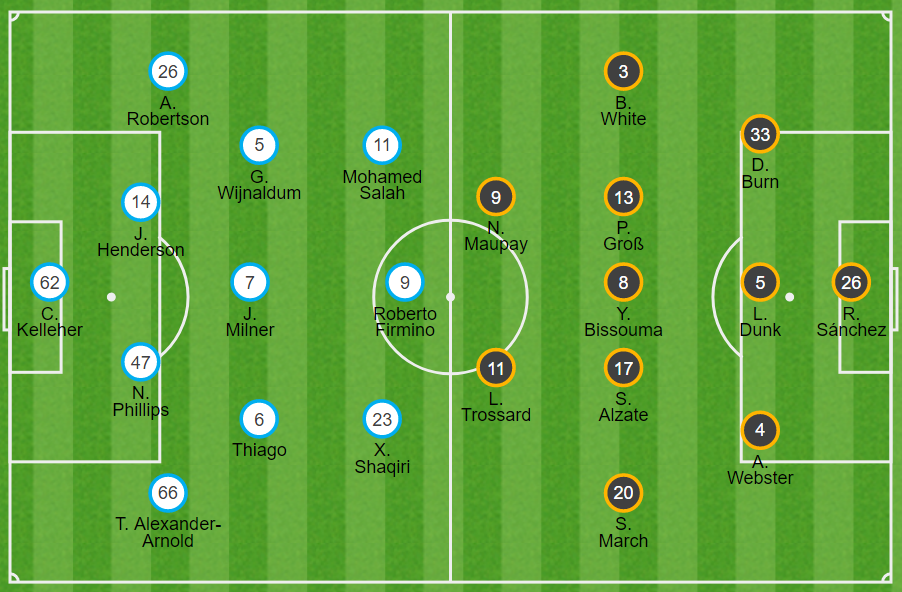 After back-to-back victories on the road at Tottenham Hotspur and West Ham had returned them to winning ways in the Premier League, Liverpool kicked off at Anfield aiming to continue that sequence on home soil.

They almost made the perfect start, too. Jordan Henderson's raking ball forward picked out Mohamed Salah's dart into the area. The forward brought it under control before scooping over Robert Sanchez's crossbar.

The hosts were dominating possession in the opening exchanges; however, Brighton fashioned a chance with 24 on the clock when Neal Maupay scampered into the area and had a shot blocked by Andy Robertson. The ball spun into the path of Burn, who skewed off target.

Solly March then lashed an effort over the bar as the Seagulls grew in confidence as the half wore on, but ultimately ended without an indent on the scoresheet.

The champions began the second period with intent – and Firmino's powerful strike inside the area was thwarted by a block by Lewis Dunk inside the initial minutes.

The Brazilian had an effort deflected wide soon after, but Brighton took the lead 10 minutes after the restart.

A ball towards the back post was met by Burn, who headed it back into the middle. Nathaniel Phillips' touch ricocheted off Maupay before touching against Alzate and finding the net.

Liverpool's response saw Alex Oxlade-Chamberlain and Origi sent on for Georginio Wijnaldum and Xherdan Shaqiri shortly after the hour.

The Reds then fashioned their best chance of the evening with some incisive play that opened up their hosts; however, Salah diverted inches wide from Trent Alexander-Arnold's low pull-back.

The hosts did have Kelleher to thank for denying Brighton a second when he pushed away Pascal Gross' low curler from the edge of the area.

At the other end, Salah crashed a powerful effort against Yves Bissouma inside the box and Firmino flashed a dipping strike wide of the post.

The pressure was mounting on the Seagulls' goal, though Kelleher was needed to deny Leandro Trossard's drive as the visitors clinched victory.