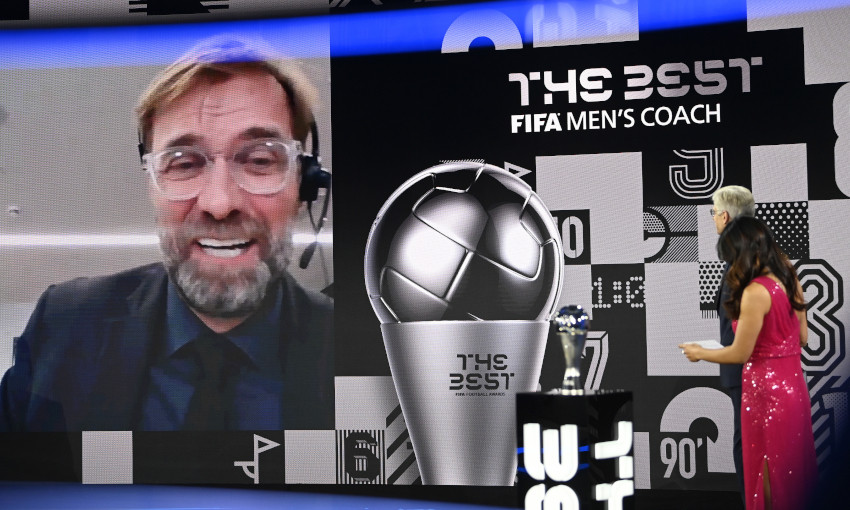 Jürgen Klopp expressed his pride at being named Best FIFA Men's Coach for the second year in a row and insisted it is a prize won collectively by his staff and players.

The Liverpool boss edged out Marcelo Bielsa and Hansi Flick to retain the annual accolade, which was announced during The Best FIFA Football Awards ceremony in Zurich on Thursday evening.

It came as recognition of a period that saw Klopp lead the Reds to three trophies as the UEFA Super Cup and FIFA Club World Cup were followed by the Premier League title in the summer.

Shortly after his win was announced, Klopp spoke to Liverpoolfc.com via video call – revealing his shock at the result, delight for his staff and wish for the club’s current ‘good moment’ to continue for as long as possible.

Read the interview in full below…

I was, I was. I didn’t expect it. And Virg told me later he was as surprised as I was! Obviously not prepared for that but of course I have to say thank you and I do that – especially on behalf of all my coaching staff. We have a [message] group obviously and ‘we won it again’ was the message pretty much. That’s clear – without them I would not be here and we wouldn’t have the success we had and all that stuff. Without the boys, the players, it would not have been possible. Arsene Wenger said it exactly right when he asked: what do you have to be, to be a good coach? He said it at the end but I think it helps in the beginning as well. A world-class team helps! And I have that, thank God. I work in a sensational club, get all the support you need, have only great people around me. So we come here, even in difficult times, every day with a smile on our face. It all makes it easier and makes it possible. I said a couple of times I’m not the biggest believer in these kind of individual awards for coaches but meanwhile I learned we just take it for all of us. We can obviously not change the world – one face gets the prize but it’s for all of us and I’m really proud of that.

You tend to talk about these awards as bonuses and they’re obviously not the ultimate goal, but it must be nice to get this recognition on a global scale?

At the end of a very successful season – now we’re already in the middle of the next season but it’s for the last season – that was an exceptional year for us, nobody has to give us anything for that because we won the trophy already, the trophy we all wanted and all the the rest is really like an extra bonus. As I said, we take that because it just shows that not only we were quite happy with the things we did, obviously some other people were happy with that as well. And I have to thank them as well because somebody needed to vote for it and obviously they thought it makes sense to give it to us again. Really nice. 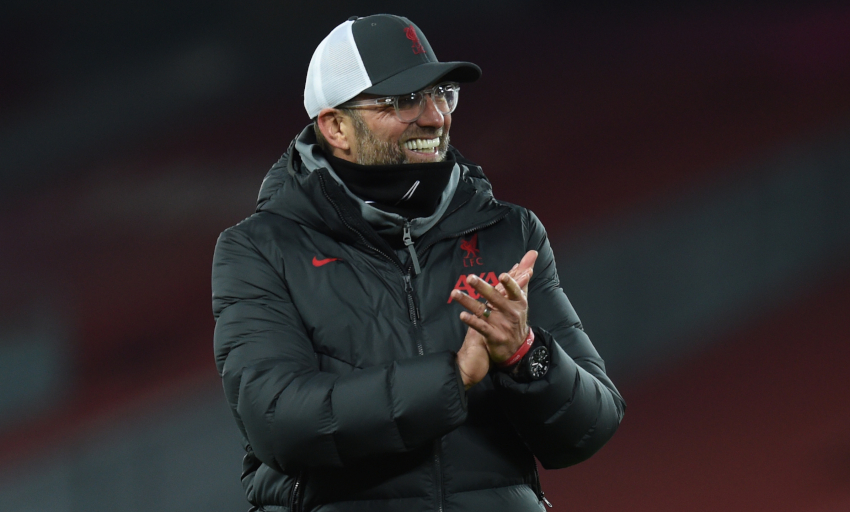 It was Marcelo Bielsa and Hansi Flick who you beat to this award – two coaches I’m sure you’ve watched with a lot of respect over the last year or so, and further back?

Yeah, with Hansi I have a long, long relationship, we know each other for ages. When I was manager at Mainz, he was manager at Hoffenheim and Hoffenheim were not in the Bundesliga. So we have a history together, if you want. I really think after winning the treble – German Cup, German league and the Champions League – I thought he would win it, to be honest. He did an exceptional job. We texted already after it. And Marcelo Bielsa, the workhorse of all us coaches probably. You cannot probably work as much as he does. We were all sitting there in a suit and Thiago mentioned Marcelo wore the Leeds tracksuit, so probably sitting in his office and preparing the next game. Such an influential manager over the years, you cannot praise him enough for the things he did for football. So, of course, it’s an honour to be mentioned only with these guys – to win it, then obviously even more so.

You mentioned earlier you consider these awards to be for your staff as a whole, not just you. This year more than ever they have had to step up…

They are – and we learned to deal with it like this. So, Manager of the Month, Manager of the Year, Performance of the Week or whatever, we celebrate a little bit. Not proper, but we are happy about it, they are all in the office and it’s nice. It just gives you another little reminder that the last game or the last month was not so bad. In this case, the last year was not bad and obviously exceptional for a lot of people. How I said at the beginning, without these guys I would be absolutely nobody. It’s a big joy and a big honour to work together with them, it’s a great group to be around all day. I couldn’t be happier about my staff, my friends. It’s really good fun.

Four Liverpool players were named in the FIFA FIFPro Men’s World11 tonight – what does that say in general about how far the club has come over the last couple of years?

I think we were the most players from one club, right? OK, we had to buy Thiago to win that competition… but that’s what I call smart business! It’s just a sign of our development in the last few years, that’s true. I wouldn’t have been around a few years ago, the players wouldn’t have been around. The club is in a good moment, that’s true 100 per cent. Still we have too many injuries in this tricky time and stuff like this, but from time to time we can smash a nice performance on the pitch and can still win football games. But it’s tough and I’m really proud – and I hope our fans are really proud – that we have these exceptional players here playing for their club. When I heard the best team of the world, I said seven of them wouldn’t play in my team! [Laughs] We are blessed with some really good footballers around and long may it continue. The boys are young enough, I’m still in kind of an OK age. So, there’s still a lot to come, let’s go for it.