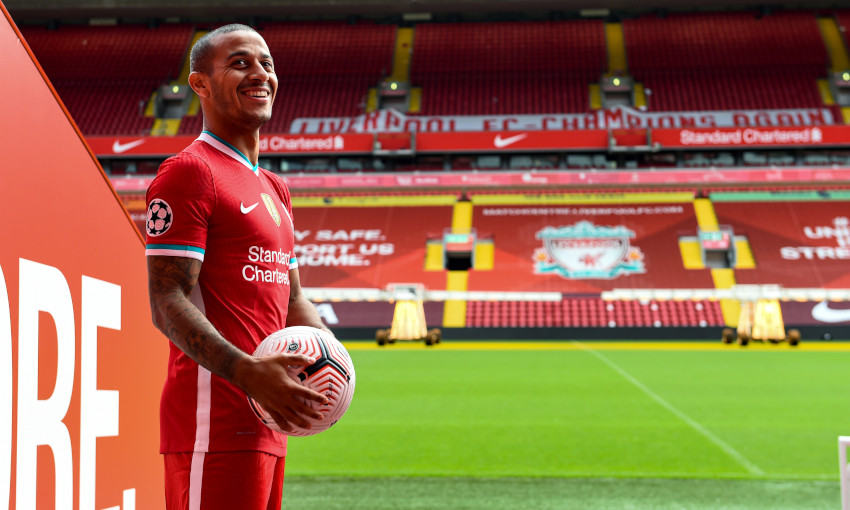 Jürgen Klopp declared his delight at the completion of Liverpool’s move for Thiago Alcantara as he outlined the benefits he believes the ‘wonderful’ midfielder will bring to Anfield.

Thiago sealed his transfer to the Reds from FC Bayern Munich on Friday afternoon, signing a long-term contract with the club following seven years in the Bundesliga.

The Spain international, also a former FC Barcelona player, arrives with a wealth of experience at the elite levels of European football – most recently as a Champions League winner with Bayern last month.

Klopp is a long-time admirer of Liverpool’s new No.6 and expects Thiago to make a seamless transition to a Reds squad aiming to follow up their successes of the past two seasons in 2020-21.

Jürgen, it’s a major announcement and piece of news for LFC today with the signing of Thiago Alcantara. Tell us your immediate reaction and how happy are you that this is done?

[Celebrates] Great! Absolutely great. I’m really happy that it finally worked out and we could just do it. It’s very exceptional because in our situation, a lot of people around us talk constantly – ‘What are you doing? – bam, bam, bam. Then preparing something like this, working on all different things you have to work in a transfer like this – with thinking about a player like him already is a joy, to be honest, because it gives us obviously some options. Then you get in contact with the boy and then you realise, OK, he obviously likes this project as well pretty much, even before he is here, which was really nice. I learned more and more about him as a person; the player I knew before, the person I learned. So I’m really happy to bring this wonderful person in as an add-on to the squad, which is just good for football reasons – but for all the other reasons as well. So, yeah, absolutely happy that he’s here. 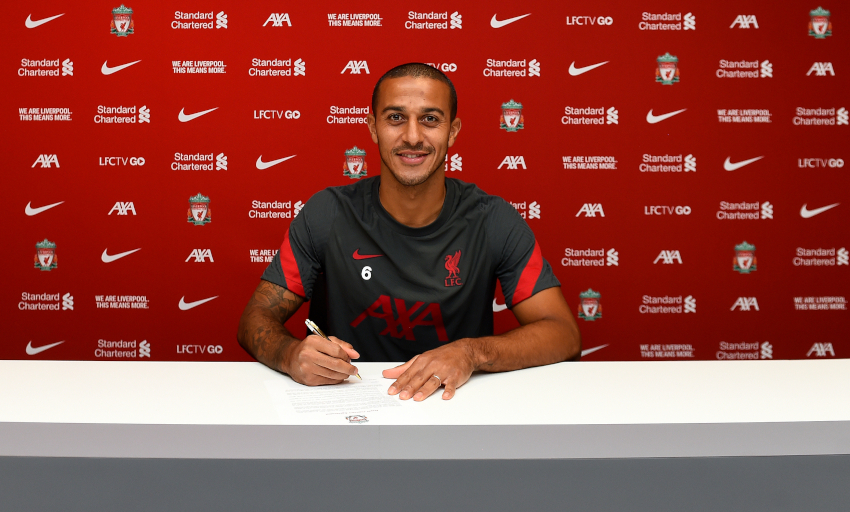 Have you had a chance to speak to him yet today?

You would have come up against him quite early on in his career at Bayern Munich when you were still at Borussia Dortmund. And we know from what you’ve said in the past you’re a fan of his talent. Is he someone you always hoped you might get a chance to sign one day? Was he always in the back of your mind as a potential?

No, a player like Thiago – settled that much at Bayern – is usually out of reach for pretty much everybody. If the player doesn’t want [to move] massively then you have no chance. You see that Bayern have long, long, long-term contracts with their main players. And Thiago was a main player for Bayern over the years. I know all the people at Bayern wanted to keep him desperately, that’s normal and understandable because he played an important role, in the last season as well. He just was ready for a new challenge and he decided for us. And that’s a compliment actually because he knows the Premier League is tough but he wants to come to the Premier League; he knows we have a good team but he wants to come to this team. When we spoke about all the players, he respects them all massively. He admires them. We played against him when we played Munich in the Champions League two years ago, so he knows what kind of machine we can be and he wanted to be part of that. It is about the club, it’s about the team, that he wanted to join us. That’s really cool. But did I think about him earlier? I thought a lot about him but never as a potential transfer, to be honest. 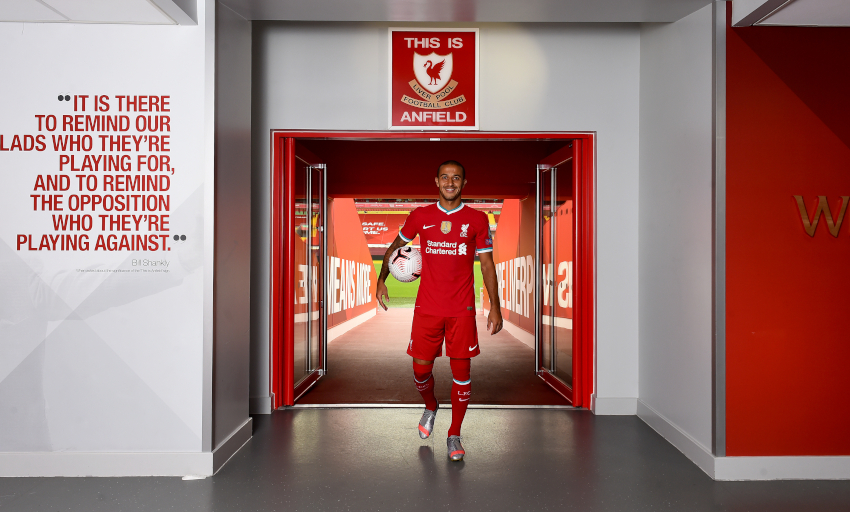 I’m not sure you personally or the team need a sign, but is this move another symbol of Liverpool’s standing in Europe at the moment? It’s a player at his peak, who has just won the Champions League, and he has taken this decision that now he wants to be part of this team…

It’s completely normal with the team when you are as successful as we were in the last two or three years, that it’s a nice story – a really nice story – and we can tell it in the future and these kinds of things. But to write the next chapter we have actually to create a new story, and for a new story you need new actors as well. We knew that always, but we don’t go for some actor just to have different guys, we want to have the right guys in and then everything is fine. That’s what we always tried to do and that’s why I’m really happy. Let’s just write a new story. That’s it. For this, we all have to push ourselves and yes, each bit of quality we can get helps us with that. I’m happy. The players are happy; since they know [about] it they are really excited about it as well. And when they meet him, how I said, as a guy he doesn’t need any special treatment or these kind of things. OK, he won the Champions League this year but all the other guys won it last year. Yes, he became German champion this year, our guys became English champions. It’s not that somebody is coming in and now we have to roll red carpets or whatever, not at all – he wants to be part of the team, work hard and be as successful as possible.

You mentioned in the press conference that his talent and his ability is obvious, but in what ways do you see he will complement what you’ve got and in what ways will he give you something else?

He can demand rhythm, that’s how it is. He can obviously create and use space for other players, all these kinds of things. First touch incredible; vision incredible; passing pretty good! But is quick as well. Work-rate great. His numbers were absolutely special last year in Germany as well, most steals, ball recoveries and all these kinds of things; most passes. But we don’t play like Bayern, so that still will need some time to get settled and nobody should expect – and I don’t expect – the special things immediately, first game, let’s see. It’s a long-term project and we have a good team, so we can give time. But, of course, we want to use him on the pitch, that’s clear. So the work can start now. 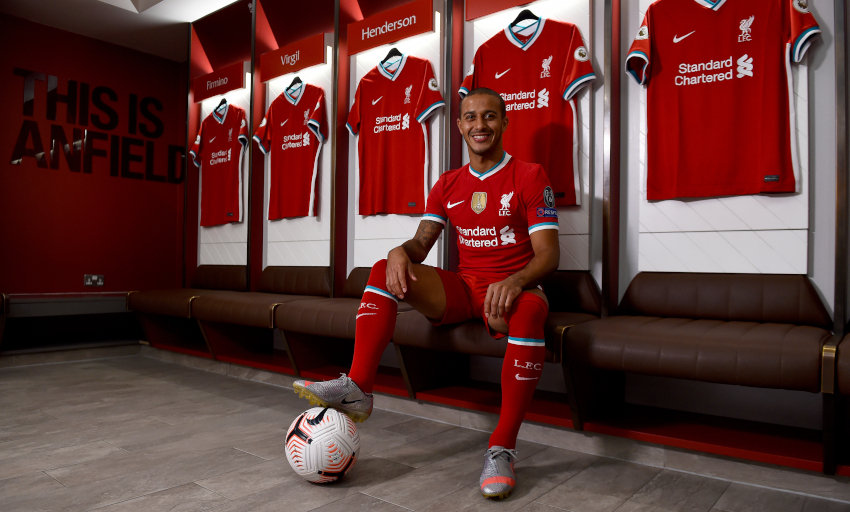 Just finally, Liverpool fans will be keen to know when might they first see him on the pitch. Any chance for Sunday or will it be looking like next week onwards?

If they watch LFCTV this afternoon, he will train! You meant the match… we will see. I didn’t make the squad now for Sunday. We will see what we can do. I didn’t meet him now, we had only phone calls and exchanged messages. So, let’s have a look how he feels. Around a transfer like this the days are pretty busy with things you usually don’t do. If he looks alright, we will find the right place for him.