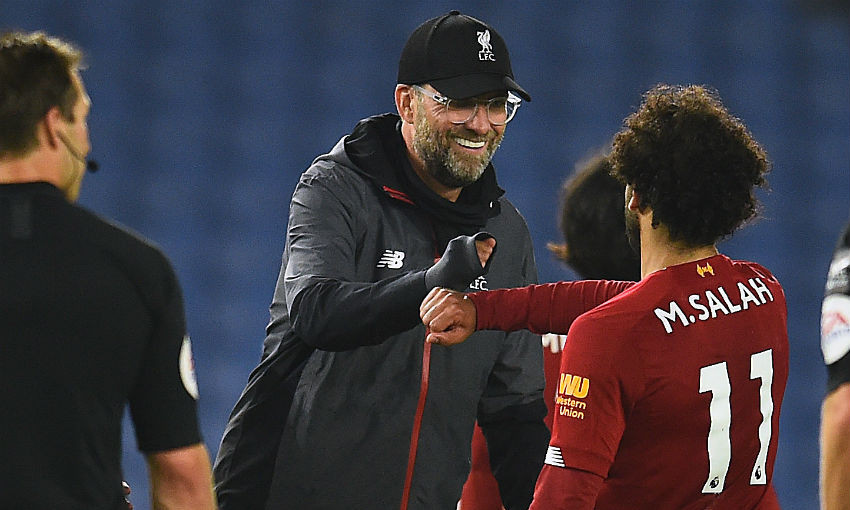 Jürgen Klopp hailed the 'exceptional' production Mohamed Salah has delivered in his previous 149 appearances for Liverpool.

If selected at Arsenal tonight, the Egyptian will make his 150th outing for the Reds after completing the switch from AS Roma in the summer of 2017.

In his three seasons on Merseyside, the No.11 has found the back of the net on 94 occasions in all competitions, claiming a host of individual and collective honours along the way.

When asked how incredible those statistics are, the boss told Liverpoolfc.com's new Match Centre: "They are, they are. Nothing more to say about this.

"In football, really special. I don't know how many other players in world football had that ever. There cannot be a lot because it's so exceptional – the 94 goals but involved in a lot of other goals as well with the assists.

"If we think about the goals we scored when he made the run or stuff like this, open up the gap, then he's probably involved in 150 goals if we would have a closer look at that, which is incredible.

"How I said yesterday, obviously a win-win situation when Mo joined us. It was brilliant for us, very good for him because I think we suit him very well and the way we play helps him.

"So, absolutely exceptional and let's see if I can line him up tonight that he has 150 games. But 150 games in three years is incredible as well, by the way. That's really a lot."

Salah will be looking to bring up the next milestone of his Liverpool career at Emirates Stadium, where Klopp enjoyed victory during his first visit with the Reds.

His side opened up the 2016-17 campaign at the north London ground and were the victors of a 4-3 thriller that produced further encouraging signs about the direction the club was heading.

"That was a really good day. So, first game Arsenal away is difficult in a season but we were quite positive about our team regarding the pre-season. We saw a lot of good things coming but then you still have to deliver results.

"What I hated that day, it was the day when Sadio scored the goal and jumped on my back. It was not his fault, it was my fault because I let him do it and after that Arsenal scored twice.

"It got really, really nervy in the end and we were lucky to get the three points. But how I said, in early stages of a relationship these kind of games are essential to make the next steps where you can show everybody outside as well. How I said, we had a good feeling but you have to show everybody, 'Oh, that looks interesting.'

"That was, for sure, a first very, very, good sign of what would come."