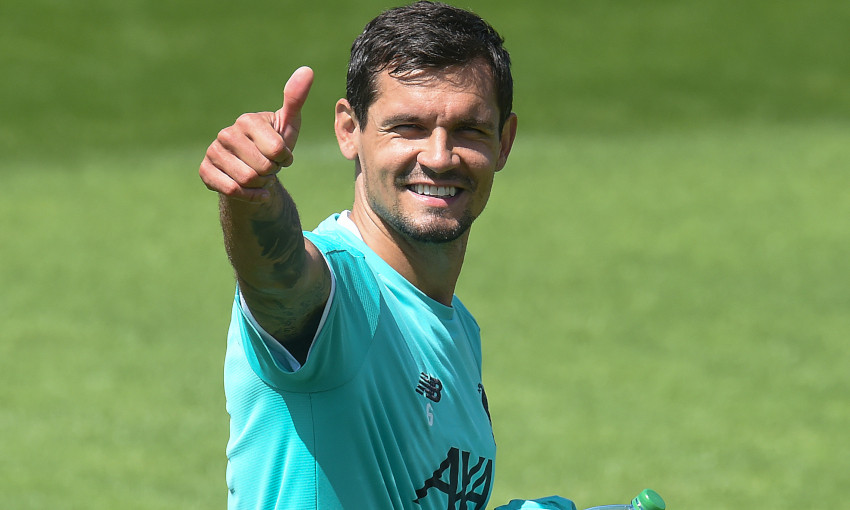 Dejan Lovren has spoken of his pride at being part of a ‘special group of players’ that has guided Liverpool to their first top-flight title in 30 years.

The centre-back has experienced the pain of losing in finals and going agonisingly close to winning the Premier League during his Anfield career.

And the Croatia international believes patience has been the key for Jürgen Klopp’s men on their road to Champions League, UEFA Super Cup, FIFA Club World Cup, and now domestic, glory.

In an exclusive chat with Liverpoolfc.com, Lovren spoke about his pride at delivering a Premier League title for Reds supporters, his emotional post on social media and Thursday’s trip to the Etihad Stadium to take on Manchester City…

Watch: Our exclusive interview with Dejan Lovren on LFCTV GO

Dejan, many, many congratulations. How special a feeling is it to win the Premier League title?

Thank you very much. We have been waiting a long time and personally from day one when I came here I always dreamed of winning a lot of trophies and one of them, of course, was the Premier League. Finally we did it and maybe the emotions still haven’t settled down, so maybe I will give you the right answer in maybe 20 years. Then we will talk!

The fact that it’s been 30 years in the waiting for the Liverpool supporters, can you put it into words what that means from the players' point of view to win this for them?

From my point of view, it’s something special that we did. When you look back, for a long time we didn’t win for anything - but then the major big trophy that we won was last year with the Champions League and this is how we started. With that, your confidence is growing and after that we won three trophies more - but to do this after 30 years it’s something incredible, especially when you know how much the supporters and the fans all over the world have been waiting for that. I’m blessed that I’m part of this team and that we did it this year. I think it’s something we will never forget.

When the final whistle went at Stamford Bridge on Thursday night, can you describe your emotions?

Yes, of course. To be honest, we went for a barbecue together there, no matter what or how the result will go. We thought it would be a great idea to go there and have a nice afternoon. To be honest, we didn’t expect that Chelsea would win or something because when you look back at how Manchester City is in form, beating all other teams 3-0 at least. So, the last 15 minutes was quite intense for us and after the whistle just an explosion of emotions and it was brilliant!

You put a lovely post up on social media after winning the title about special people who are sadly no longer with us, some close to your heart. And many Liverpool supporters as well and indeed their families will have also lost their lives during this pandemic, they will never be forgotten. So this is for them, for everybody, it’s so special…

My first post was '96' and the heart I put on my Instagram account - and this is a tribute for them and for all their families for how many years they were living with pain. I know they are now happy for everyone and smiling. I know they will never get the satisfaction back but at least we did it for them. Also, from my personal point of view, two weeks ago I sent a message to a kid who was not in the best shape and three days before the Chelsea game I found out that he died, unfortunately. He was only 14 and he just wanted to see us lifting the trophy. I appreciate all the people all around the world who are supporting us in difficult times. So this is what I wanted to give them back with just a positive message, and that they know that we did it for them, for us, for everyone.

From the Champions League last year to three trophies in the bag this season with the Super Cup, Club World Cup and now the Premier League - as a player it doesn’t get much better than that really…

When you are a professional player this is your dream and this is your dream to be on the top of the level. When I first came here we played in the Champions League and we lost in the group stage and we didn’t even come through, so there was a lot of negativity and everything, but I always said to myself it’s impossible not to win something here in Liverpool, so that’s why I came here. I always believed in this team and I always believed in just this big project, to be honest. So that’s why I came. It took six years but nothing comes overnight, that’s the main message. This should also be clear for the fans and supporters to other clubs. You need to have patience. Of course you need also to have luck and to have a great manager, a great squad and great owners, even better supporters. So it’s amazing.

Since you came to Liverpool you have experienced the pain of final defeats and near misses, but eventually the glory has arrived…

The title may be won but there are still seven games left to play. There is no danger whatsoever the Liverpool players will think, 'That’s it' as there’s still a lot to play for in terms of points and pride…

We achieved everything we wanted to achieve but now it’s showing again your character. But also maybe and it has started already to think about the next season, to get ready now to be in good shape because it will be a short break and the season will continue quite quickly. It’s important to stay in this winning mentality. It’s important and it would be really stupid of us if we just allow from top gear we go back to second gear. It would be really stupid from us but I don’t think [we will]. I know what kind of mentality we have in the squad and I’m sure we will give 100 per cent on the pitch.

Manchester City away next – you go into the game 23 points ahead of them in the table. That is impressive at this stage of the season, isn't it?

Yes, it’s a big achievement. But still we are facing an incredible opponent with such a different style than us and they love to play football and it’s always a big battle against them. But you know it says a lot about us that we are 23 points in front of them. Sometimes you think, ‘Oh my!’ We should appreciate what we have done but it’s not now about the 23 points, it’s about to continue winning. So it will be an enjoyable football match to watch.

Do you think the fact that Liverpool are champions makes this game even tougher in the sense you are the team to beat now and they will be desperate to put one over on you?

Yes, definitely, and I would do the same. This is how we did it when City came here unbeaten to Anfield. It will be, like I said, a tough game but we know what we are playing for, we are playing for the badge, for our supporters, for the owners and again for our face to show that we can do it.

Yes, it was an important win that moment and it was a brilliant game from us. It will be different now without the fans but we will be coming with a lot of confidence there. They are a top team so it will be interesting to watch.

You have enjoyed some great success with Liverpool at the Etihad in the past. The 4-1 game just after Jürgen came in, what a performance that was…

Of course, I remember that game and I remember the Champions League when we won there. We have had quite big and important wins there but, again, it’s a different story with a different ending, so it depends on us. If we are ready to fight and to recover the ball again as quickly as possible, we will be again a tough opponent.